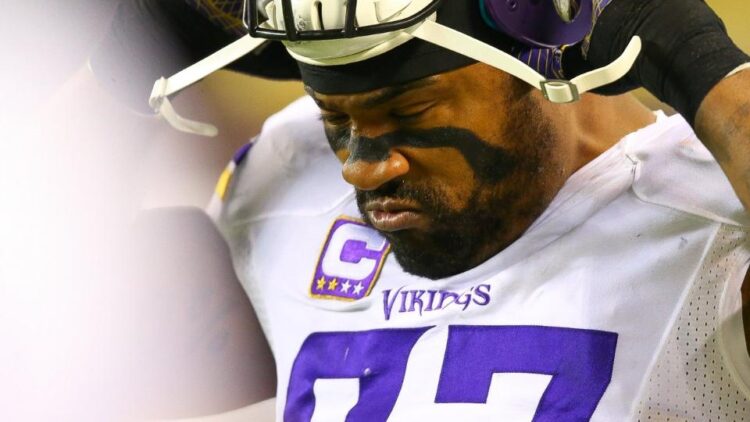 I am about as torn on this game as I’ve ever been about a Vikings game before. All of the analytical and logical factors, to me, point towards the Vikings taking care of business at home against the Bears and finding their way into the playoffs to most likely end up turning around, traveling to Chicago and doing the exact same thing next weekend. However, I will be 35 in June and during all of my years on this planet I’ve seen dealt with the same amount of heartbreak and sadness as someone that happens to live in Green Bay and is turning 100 next year. Point being, I’m unsure of whether to focus on my rational side (which is telling me that the Vikings will win) or my emotional side, which is telling me that they’ll find a way to pull a Vikings and blow the most important game of the season.
The Vikings have obviously already faced the Bears this season, a game in which they trailed 14-0 at half-time and if not for a devastating pick six in the second-half, very well could’ve beaten the Bears. Even with that pick six it took a late field goal by the Bears to really ice things, mainly because the Vikings did a good job of limiting the damage that Mitchell Trubisky could inflict on the ground (despite the fact that he did have what was up to that point his highest rushing total in 43 yards (he’s since eclipsed that total four times)) and through the air. Trubisky threw for a paltry 165 yards, which was his third lowest total on the season, with a weak 5.32 yards per attempt average. Considering the fact that the Vikings defense is playing even better now than it was back in the middle of November, and it’s hard not to get excited about the Vikings prospects.
On top of that, Trubisky has been borderline bad on the road this season. Of his 24 passing touchdowns only FIVE have come in away games, and of his 3,000 (+) yards passing, only a third have come on the road. Considering that US Bank Stadium should be the loudest it’s been since the Wilf’s realized that the side panels were faulty and again, it’s hard not to get excited about the game.

The Vikings will have things dialed up to 11 to match that crowd and new offensive coordinator Kevin Stefanski should have a great game plan for this great Bears defense (think back to the first Bears game, where Zimmer said going into half-time that they might start chipping Khalil Mack in the second half… A lot has been made about DeFilippo not running the ball but the fact that he didn’t go into that game with a plan to limit Mack was about as fireable of an offense as is possible), too, so with that I’m going to give two scores (cop out, I know). The first is my rational score, which is the Vikings winning 31-28, the second is my emotional score, which has the Vikings losing 28-20.

The Bears are last year’s Jaguars: an elite defense with outrageous talent at every level and an offense that can sustain drives despite limited talent, with a quarterback who is great at everything except throwing a football.

But the Vikings’ defense can go toe-to-toe with the Bears’, and the offense under Kevin Stefanski at least so far looks like Pat Shurmur’s 2017 offense—just with more talent.

This being Vikings’ football, this game (like any game) is entirely lose-able. But the Vikings are rightly favored in this matchup at home, and they’re my best guess to win this game. I expect some beautiful throws and boneheaded throws from both quarterbacks, tight coverage and stout run stops from both defenses, but ultimately I think the Vikings’ superior offensive weapons will do enough damage to eke out a victory.

During the first matchup between Minnesota and Chicago, the Bears were clearly the superior team. The Vikings acted like a deer caught in the headlights, scared by all the uncertainty of a revamped Chicago team, and perhaps rightfully so.

The trade for Khalil Mack, maturation of Mitchell Trubisky and addition of free agent playmakers this offseason resulted in the Bears’ first NFC North championship since 2010. Their defense is pretty good, too.

This time around, however, things are different. The biggest difference: the Vikings are at home, where they are 5-2 this season. The team also features a new offensive coordinator that has found balance and extra touches for the Vikings’ most dynamic offensive weapon. And most importantly, the Vikings are fighting to keep their season alive.

A victory Sunday would be the third in a row for Minnesota. It would also end the Bears’ 3-game winning streak. I’ve said it for quite some time now, but the Vikings could be peaking at just the right time for a postseason appearance.

Look for a healthy dose of Dalvin Cook and quite a few targets for tight end Kyle Rudolph.

The Vikings offense looked horrendous the last time these two teams met, and the Bears defense hasn’t had any major injuries or regression. The Bears defense will dominate all game. However, the Vikings defense is healthier than it was the last time these teams played, and they have been playing outstanding football. I think the game is low scoring, with the Bears winning 24-23. The game ends up being lost because of a Dan Bailey missed kick, and Viking fans everywhere cuss out their televisions. SKOL!

This year’s Jekyll-and-Hyde Vikings team has the talent to do real damage. The defense is still one of the most sound in the whole league and the offense has talent, even if it has not been used in the most effective way under either DeFilippo or Stefanski. Could they have built enough momentum in their current two game winning streak to ignite a playoff run and give Zimmer his first back-to-back playoff seasons as Vikings head coach? Thats the huge question which will be answered Sunday.

The Bears come in flushed with pride thanks to their impressive victories over the Rams and Packers, and they are within striking distance of a first round playoff bye, which means Vikings fans should expect the Bears to come out all guns blazing against their longtime division rival. That said, the Bears’ losses this season have come at inopportune times for them and have been in real stinker situations (Dolphins & Giants especially). For that reason, Vikings fans can have some hope that they will pull it off, but many pieces will need to fall into place and the Vikings will need to play a consistently stinker-type game to pull off the upset.

Will the Vikings do it? The answer to that question hinges on the Vikings offensive line, which has been their Achilles heel all season. Added to their already existing problems is the fact that Mike Remmers, C.J. Ham & David Morgan’s statuses for Sunday are all very up in the air. If one or more cannot play, severely struggling rookie Brian O’Neill will be facing a chops-licking Khalil Mack alone, and that will spell doom for the ability of the Vikings offense to score enough points to win.

The game will be a close hard-fought battle, with defenses setting the tone and the offenses needing to capitalize on those few mistakes the opposing defense makes. Fans should expect a game of grind-it-out low scoring with flashes of brilliance from offensive players just to get in scoring opportunities. In the end, however, the winner will be a surprise. It will be Philadelphia, as the Eagles pull off a repeat of last season in knocking the Vikings out of playoff contention.

he four keys are as follows:

The Vikings all know this—as do their fans. The problem is whether or not they will get it done. The Vikings shouldn’t be desperate, since they have been playing well, but the Bears are confident and don’t have much to lose. The Vikings will be ready to go since the playoffs, for them, start this week. It’s time for the butterflies to set in:

“There will always be excitement, nerves, anxiety, butterflies, whatever you want to call it—that’ll always be there,” Kirk Cousins said. “This matters to me. I joke with people that when the math teach in junior high school said, ‘hey, we’ve got a pop quiz,’ you start to feel the butterflies. Because you want to do well; it matters to you.

“Frankly, I think when I have butterflies, I play a little better because it heightens your awareness and your attention to detail, and your sense of urgency. I have always felt that when I step on a field regardless of the game, and those will be there again Sunday afternoon, and that’s okay, it’s part of the deal.”

At this point we all know that the Vikings need to win in order to make the playoffs. The question heading into this game is what will the home team see from the Bears? And how motivated will the Monsters of the Midway be to win the game if the most likely outcome is a rematch against the Vikings in Chicago next week?

Matt Nagy kind of marches to the beat of his own drum in the sitting/rest department, as he sat all of his starters for the entire preseason this year. Why are we so certain he is willing to risk injuries to starters now, when the outcome of both scenarios end in a home playoff game for the Bears? Don’t get me wrong, I’m sure the Bears would take the win and the chance at a number two seed if they could, but the risk just isn’t worth it if I put myself in Nagy’s shoes. I think the Vikings are going to win this game but I don’t think it will be because of any kind of transcendent performance from the offense. Rather, I think it will be because the Bears have no interest in showing their hand to the team they will be playing next week, when it actually counts. If the Vikings can score early I think the Bears roll over and let them have the victory. Playing for their playoff lives, the vikings should be very fired up early and it should lead to victory.

Predicting a Vikings win and as a result, a playoff berth, sounds like a vote of confidence but I think we are going to have just as many questions heading into next week as we did heading into this one.