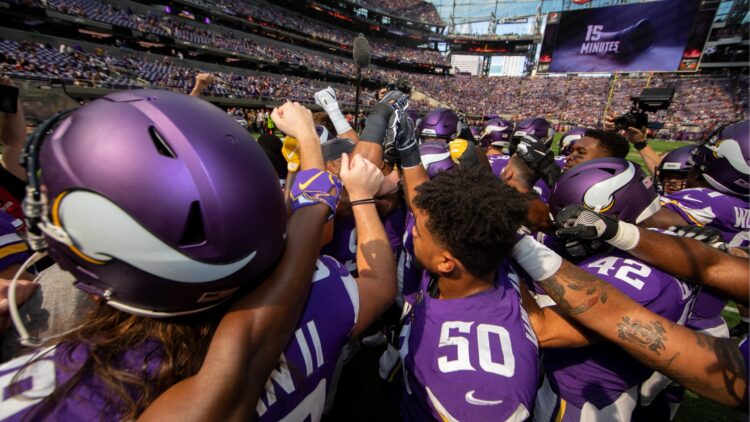 To move forward in the playoffs the Vikings have to beat the Chicago Bears. And if they do, next week we will be saying: “Rinse and repeat.” That is what’s in front of the Vikings this Sunday at U.S. Bank Stadium. Beat the Bears, secure a Wild Card spot and then travel to Soldier Field next week and play them again in the first round of the playoffs. Therefore, for the Vikings (who must essentially win to get in), the postseason has begun.

Of course, there are other playoff permutations: the Philadelphia Eagles could lose to (or tie) Washington on Sunday (they play at the same time as the Vikings do) and the Vikings could even forfeit against the Bears and still make the playoffs. Or the Seattle Seahawks could lose to the Arizona Cardinals at home and with a Vikings win Minnesota would move into the fifth seed in the NFC and play in Dallas next week. But the Vikings are looking at it like “win and you get in.”

“Man, this is a playoff game,” Vikings defensive tackle Linval Joseph said. “You look at it, this could be our last game or we could go forward. So, at the end of the day it’s a playoff game.”

There is also the chance (not really) that during the game the Bears will lose some incentive to win, play hard, or play their starters, if the Los Angeles Rams, who hold the second playoff seed, get up big in their game against the San Francisco 49ers, virtually eliminating the Bears chance to get that seed. But those two games play simultaneously, so that kind of scoreboard watching won’t happen. Yet, Bears coach Matt Nay was asked about it anyway.

“We’re going to play our guys. We’re playing to win, so that’s our mentality,” Nagy said. “We’re not treating this any different than any other week.”

It is different for the Vikings, who have their season on the line in the game. It is a tall task this Sunday for the Vikings to win and get in. The Bears locked up the NFC North title a couple weeks ago and have been playing decent football all season. We know about their vaunted defense that was augmented by the addition of edge rusher Khalil Mack, which has helped propel them to a rank of fourth in the league in defense (right behind the Vikings).

The Bears defense is particularly good against the rush (ranked second in the NFL for having given up just 81.1 yards per game on the ground), so it will become a challenge for the Vikings, who have run the ball well recently, and will certainly look to do so again on Sunday.

More importantly, it will be incumbent upon the Vikings offense and special teams to take care of the football. The Bears, who got three turnovers against Minnesota in their last matchup (three turnovers that helped decide the game), have accumulated the most in the league (27 picks and nine fumble recoveries for a league high of 36). Vikings head coach Mike Zimmer was asked if the Bears are doing anything different than they have in past years to cause so many turnovers.

“No, I mean not a whole lot different,” Zimmer said. “Obviously [Akeem] Hicks is a great player, [Khalil] Mack is a great player. I think Eddie Goldman has been playing really well. Scheme-wise, it really isn’t that much different, no. Just guys making plays. The thing I notice the most is in the back end, they’re relying a lot on the pass rush, so they’re able to play a little bit tighter. I also feel like they do a good job in their zone concepts. They’re able to jump some balls. I think [Eddie] Jackson has helped them some in that regard, but they’re playing with a lot of confidence, and that helps, too, because you can sit on some routes and go get it.”

On offense, the Bears are nothing exemplary. They are 21st in overall yardage (344.7 yards per game), 20th in passing yards per game (226.7) and 14th in rushing yards per game (117.9). And that rushing percentage, which is produced by backs Jordan Howard and Tarik Cohen, is supplemented by the legs of Bears quarterback Mitchell Trubisky, who with 405 rushing yards is just 15 behind Cohen on the season. He is the biggest threat to the Vikings defense in terms of rushing, since Trubisky gashed them for 43 yards last time and the timing and situation in which they occurred certainly hurt the Vikings. The Vikings must pay particular attention to Trubisky when he is on the run.

“We have to play together,” Joseph said about defending Trubisky. “He’s a very good quarterback. He can run. And we can’t let that be the game this time around.”

Trubisky is known as a first-read quarterback, in essence, the young QB looks for his first read and if it isn’t there, he starts looking to get out of the pocket and do some damage with his legs. Trubisky is learning the ropes of NFL signal caller, so the Vikings can’t just think they can sit back, takeaway his first read and then contain Trubisky in the pocket. Even if they do, Trubisky is quick and fast and has great escapabilty.

“I probably didn’t know he was as fast as he was, running,” Zimmer said on what he learned about Trubisky after the last time they played. “He had some really good runs on us. We had to adjust during the course of the ball game. That was part of it. He does a nice job in the RPOs and the passing game that they do.”

The Vikings had better anticipate a more complete from Trubisky, as he has been improving in productivity and confidence as the Bears keep on winning. The Vikings found out the Bears were for real last game out, and now they have to play a complete game this Sunday in order to beat them and extend their season—even if that means meeting them the following week in Chicago.

The four keys are as follows:

The Vikings all know this—as do their fans. The problem is whether or not they will get it done. The Vikings shouldn’t be desperate, since they have been playing well, but the Bears are confident and don’t have much to lose. The Vikings will be ready to go since the playoffs, for them, start this week. It’s time for the butterflies to set in:

“There will always be excitement, nerves, anxiety, butterflies, whatever you want to call it—that’ll always be there,” Kirk Cousins said. “This matters to me. I joke with people that when the math teach in junior high school said, ‘hey, we’ve got a pop quiz,’ you start to feel the butterflies. Because you want to do well; it matters to you.

“Frankly, I think when I have butterflies, I play a little better because it heightens your awareness and your attention to detail, and your sense of urgency. I have always felt that when I step on a field regardless of the game, and those will be there again Sunday afternoon, and that’s okay, it’s part of the deal.”