If you were to ask the Vikings’ coaching staff who they think the best player on the Vikings’ offense is, who would you guess they would say?

Maybe Adam Thielen, the all-pro wide receiver who is currently PFF’s #1 WR?  Or maybe Stefon Diggs, the WR who draws the defensive attention to set up Thielen’s historic success?  Or maybe Kirk Cousins, the QB throwing them the ball?

Based on how the coaches talk about the offense, my money would be on Dalvin Cook.  Maybe that sounds silly given how talented Diggs and Thielen are, but Dalvin Cook is just something else.

Here is a graph of each running back in the NFL this season with at least 50 carries or catches showing how often they force a missed tackle (either by breaking it or evading it).  Dalvin Cook is off the charts.  Literally: 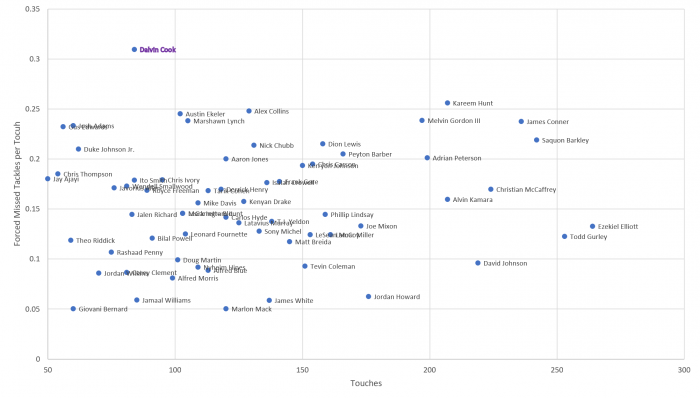 The average NFL back forces a missed tackle every six-and-a-half touches.

Cook forces a missed tackle once every three touches.  That’s the best figure of any player (not just back) in the NFL.  By a long shot.

I could go on, but why talk about it when you can watch it?

Cook’s touchdown on the screen last Sunday was set up by a phenomenal block by Pat Elflein, but there are still at least three Packers’ defenders who come in contact with Cook.  Cook has the open-field vision to make every one of them miss.  He doesn’t even slow down.

This next pass was a simple 8-yard gain for a critical first down.  What makes it special is how it takes over half the defense to bring Cook down.

It would be one thing if Cook only evaded the first defender in space.  But Cook does not stop at just one broken tackle; he comes into contact with seven separate tackle attempts before finally being taken down.

Speaking of taking half the defense to take Cook down, this next play was one fumble away from being Beastquake 3.0:

The fumble turns this highlight into a lowlight, but it doesn’t take away from just how obscene Cook’s balance and footwork are here.  Cook runs through a nonexistent hole, gets hit at the line of scrimmage, comes into contact with seven separate defenders, and three seconds later he’s running free in the open 15 yards downfield.  If it weren’t for the fact that he lost his shoe, you would almost think like Cook was a ghost, floating right through the entire defense.

One more run, this one from last year:

Dalvin Cook combines elite footwork and change-of-direction with a preternatural balance reminiscent of someone like Marshawn Lynch.  Defenders tend not to be able to get their hands on Cook, and when they do, he just shrugs off contact.  And when they finally wrap him up, he just keeps churning and falling forward.

Cook is an Elite Breakaway Threat

But beyond Cook’s off-the-charts ability to evade and shrug off would-be tacklers, Cook has the ability to go the distance almost any time he touches the ball.  Cook ran a 4.49 40-yard-dash at the combine, and he plays even faster in pads:

NFL Next Gen Stats recorded Cook’s speed on this run at 22.07 miles per hour—not just the fastest ball carrier in the first ten weeks of 2018, but faster than anyone in all of 2017 as well.

A lot of hullabaloo was made over Cook’s underwhelming performance at the combine, but the truth is that breakaway ability is all over his tape:

That last play is special for a lot of reasons.  Usually cutting a zone run all the way across the formation to the other side of the defense is a recipe for disaster, but Dalvin Cook is just the kind of rare talent not only to see that cutback lane, but to have the footwork, agility, speed and vision to turn these kinds of plays into home runs.

Here is another great example of Cook’s ability to break away from the defense:

Even with defenders taking good angles and having a head start upfield, Cook is able to burst down the sideline for a huge gain here.

And even where Cook isn’t busting out huge chunk plays, he consistently wins with speed to the edge on outside  runs or dumpoffs to the flat:

Regardless of what his offensive line blocks for him or what his box score stats will tell you, his speed, footwork, agility and elusiveness make him into one heck of a home-run threat, and one of the best ball carriers in the league when he hits the open field.

Cook Can Be a Special Receiving Weapon

All the plays above highlight what a special running talent Cook is.  But it’s his ability as a receiver where he truly shines.

No, that’s not Stefon Diggs lined up as the outside WR on the 24-yard slant.  That’s Dalvin Cook.

Cook has a great release, bursts into the defender’s outside leverage and makes a fantastic outside jab step to create space at the break.  This would be an above-average route for a wide receiver.  It’s ridiculous coming from Cook.

Cook might be a back, but you can line him up out wide and run pretty much the full route tree—not just screens, but go routes and out routes, too.  And if you can clear space underneath and hit Cook in space, that’s where his receiving ability, home run ability and elusiveness can all combine in one play:

The Counterarguments—Fumbles, Drops, Production and Injuries

Despite everything that flashes on film, there are plenty of good reasons Cook is not a household name just yet.

Cook only has three fumbles in his career, but given his limited volume, he does have an above-average fumble rate.  The problem probably seems worse than it is in reality, as Cook has had the misfortune of having all three of his fumbles recovered by the defense (on average, offenses recover about half of their own fumbles).  One of his fumbles came when he tore his ACL and lost the ball while reaching down towards his knee, and another fumble came after he had lost his shoe on the field.  But even if those plays were a little fluky, ball security has been a bit of an issue for Cook going back to Florida State.

Cook also suffered from the occasional concentration drop in college, and in four games as a rookie, Cook recorded three drops.  The issue has seemingly improved this year, as Cook only has one drop on over 20 targets (an above average rate for a back), but given his history might still come up going forward.

Cook only has 400 yards from scrimmage this year, and he only averages 3.5 yard per attempt this year.  That will happen when you are running behind one of the worst offensive lines in the NFL and constantly getting hit in the backfield, because good run blocking tends to matter a lot more for running production than good running talent.  Just compare 2016 Todd Gurley, who averaged 3.2 yards per carry running behind one of the worst lines, to the Todd Gurley this year running behind the NFL’s best run blockers.  Whatever the film might say, Cook won’t be earning a pro bowl nod this year.

Cook has struggled with injuries through his career as well.  At Florida State, Cook tore his labrum twice, the second tear requiring shoulder surgery.  As a rookie, Cook tore his ACL.  As a sophomore this year, Cook has been sidelined with a nagging hamstring injury.  The bad thing about these injuries is obviously they have forced Cook to miss a lot of playing time.  The good thing is they are all unrelated, so they would not necessarily suggest Cook is any more likely to be injured going forward.

All these flaws are very real concerns, but none of them are fatal.  When you are as talented on film as Cook is, you happily take those lumps with his talent.

Dalvin Cook is a special kind of player.  He glides through then breaks through would-be tacklers.  He is as dangerous as anyone in the open field.  And he is a complete weapon in the passing game.  He has also shown tremendous development as a pass blocker.  He’s not just a complete back; he’s a complete weapon.

When Dalvin Cook is fully healthy, he has a clear argument for the best player on the Vikings offense.  And given how good the other weapons on this offense are, that is definitely saying something.