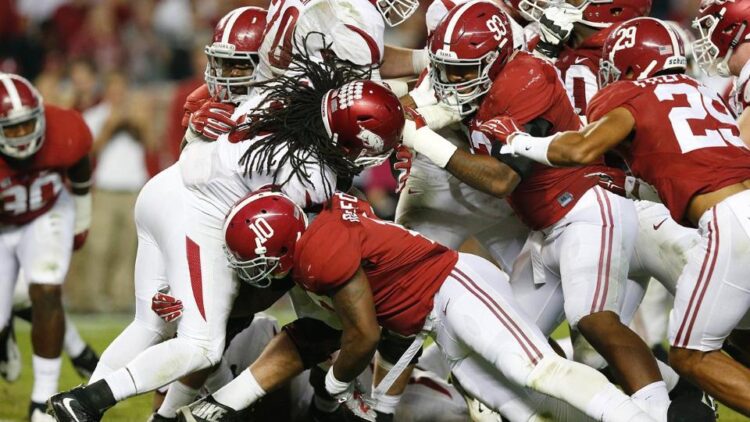 Run defense: There are particular types of interior defensive lineman. Some are mainly run defenders, while others specify as pass rushers. Payne falls under the run defender category. He is phenomenal against the run.

Alabama head coach Nick Saban has historically been known as having deep and dominant defensive lines. Payne was just the next in a historic pedigree. He was one of the biggest reasons why the Crimson Tide were one of the best units in the country versus the run.

In this example, he is at the one-technique position, and his smarts defending the run are on full display. In the National Championship game, Georgia is attempting to execute an outside zone run play against Payne. The center’s sole responsibility on this designed run is to “reach block” Payne, meaning he is supposed to seal off his outside shoulder in order to create a running lane for the ballcarrier.

Initially, Payne loses, as the center successfully is able to cross his face and reach him. But what makes this play so good by Payne is that he keeps fighting and refuses to be blocked. Many interior defenders would’ve settle with losing this snap, but not Payne.

Notice the subtle hand swipe Payne executes on the center’s elbow to disengage his hands, enabling him to make the tackle. Techniques like that have evaluators salivating over Payne and his potential in the middle of a team’s defensive unit.

Natural power/explosion: The former Alabama defensive tackle has very heavy hands. This is evident when watching blockers attempt to latch onto him and generate movement. He very rarely loses his ground and is nearly impossible to block in one-on-one situations at the point of attack.

Stat production: Payne’s lack of production is one of the biggest concerns among many evaluators. After being a 2-year starter, he has only recorded three sacks and five tackles-for-loss in his entire career. Saban’s defense isn’t necessarily about generating high stat totals because it is dependent upon every player maximizing their role, and that is exactly what Payne did. Still, there seems to be a lot of criticism there because his major stat totals are low for a prospect that is considered to be an early-round selection.

Pass-rush abilities: He’s shown to have a club-and-rip and a swim move, but overall, Payne doesn’t have a large arsenal of moves. He heavily relies on the swim move more than any other when attempting to rush the passer. It results in him leaving his chest open a lot. By doing this, it gives blockers a larger target and enables them to block him cleanly.

It is well documented how strong Alabama’s strength and conditioning staff thinks Payne is. Reportedly, prior to the 2017 season, Payne was on record as squating 600 pounds, power cleaning 365 pounds, while also running a 4.93 40-yard dash time. All those feats are very impressive for a 6’2,” 308-pound prospect.

There is no doubt that Payne is a ready-made prospect who could come in on day one and be a main contributor. His combination of size, power, and intelligence will allow him to play early on his career. That seems to have become the standard with Alabama prospects. Most are known as being pro ready. That is exactly what you’re getting with Payne.

Pairing him alongside Linval Joseph on the interior of the Vikings’ defensive line would give Mike Zimmer’s unit one of the more formidable fronts in the entire league. Consistent run defense has been one of the defense’s biggest flaws throughout his tenure and was a reason they suffered a heartbreaking loss to the Eagles in the NFC Championship game.

It’s still unclear whether Payne will be available at No. 30 overall. A lot is dependent upon his combine performance, but from a playing style perspective, Payne is a perfect fit in the Minnesota front as a three-technique.