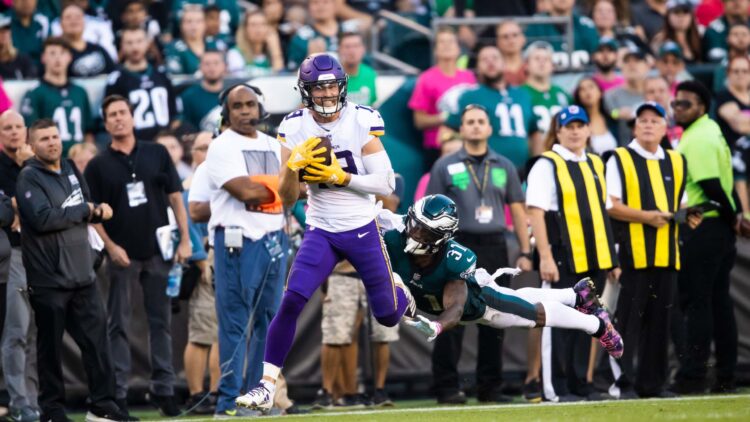 The Minnesota Vikings are back on track, are so it appears.

After a disappointing two-week stretch that included a fugly home loss to the Buffalo Bills and a tough road loss to the undefeated Los Angeles Rams, the Vikings looked like their 2017 selves on Sunday defeating the Philadelphia Eagles 23-21.

Minnesota has struggled to put together a complete game so far — when one group is performing, the other is seemingly struggling. Quarterback Kirk Cousins has been phenomenal in four out of five games but couldn’t get comfortable Week 3 against Buffalo.

Consistency would not be a term used to describe these Vikings. At least not yet.

Thielen has surpassed 100 receiving yards in five straight games, which has not been done before in the Super Bowl era. This hot start follows a phenomenal 2017 season in which Thielen was named an All-Pro and racked up over 1,200 receiving yards and spearheaded an offense that earned a birth in the NFC Championship team.

This is superstar production.

Yet, the narrative on Thielen continues to be the underdog path he took to get to where he is. Multiple popular media outlets posted about Thielen’s background after he made history on Sunday with another 100-yard performance as if he is just now bursting onto the superstar scene in the NFL.

Adam Thielen’s only offer was a $500 scholarship from a D-II school.

Now he's the only WR with 100+ receiving yards in each of his team’s first 5 games pic.twitter.com/mwT5MVy3sH

This isn’t to say the story isn’t remarkable or fascinating. It’s unprecedented to climb the ranks from rookie camp standout to practice squad member to special teams ace to superstar receiver like it’s a normal career arc the way Thielen has.

But in reality, Thielen has always produced like a superstar when he has been given the opportunity. He shined down the stretch in 2016 when given the chance and even recorded a 200-yard, two-touchdown performance at Lambeau Field.

The national media contingent is catching on about a year and a half too late, but it’s been true for a while now: Adam Thielen is a superstar. He absolutely deserves to be in the conversation with Antonio Brown, Odell Beckham, Julio Jones and Michael Thomas. He’ll line up all across the formation and run circles, literally, around the opposing No. 1 cornerback. You can even try to hold Thielen during a route and he’ll *still* make the catch.

And on the rare occasion that the defensive back is able to stay step-for-step with Thielen, throwing the ball his way is still the right move for Kirk Cousins considering Thielen finished No. 4 in the NFL in Pro Football Focus’s contested catch rate a season ago.

In a season filled with inconsistencies, Adam Thielen has produced at a superstar level for Minnesota week in and week out.

The Skol Scale jumps a whole point after an impressive and much-needed road win against the defending Super Bowl champions. The Vikings put together the best complete effort of the season, getting contributions from all phases to secure the win. Defensively, Minnesota’s pass rush was all over Carson Wentz and got the best of one of the best offensive lines in the NFL. The effort is very encouraging and a step above what we had seen the past couple of weeks.

Offensive coordinator John DeFilippo called his best game of the season against the Eagles while Kirk Cousins put together likely his best performance while under pressure in his career to lead the Vikings offense to 23 points — a total that should have been more if not for a couple of missed Dan Bailey field goals. Additionally, Thielen and Stefon Diggs roasted the Eagles secondary like the No. 1 receiving duo in the NFL should.

The Skol Scale increase is also partly due to the Vikings’ schedule. The tough opening stretch is now complete — three road games in the first five weeks against Green Bay, Los Angeles and Philadelphia is freaking brutal. The slate appears to simmer down for the foreseeable future, with games against the Cardinals, Jets, Saints and Lions before the bye week — three of which are at U.S. Bank Stadium.

Minnesota started similarly last season and took advantage of a light stretch in the schedule to gain some momentum before the bye week. The 2018 slate presents an opportunity to do the exact same thing a year later.

*Enters equation into calculator* this checks out.

7……. they have one of the easiest remaining schedules in the league. However they need to win 8-9 more games in order to make the playoffs. With 11 games left in the season, that leaves no room to be sloppy. 3 out of the next 4 are MUST WIN games.

Good point here — generally, 10 wins is the benchmark for making the playoffs, and the Vikings have 11 games to win eight more at minimum if they want to play in January. That’s not easy.

Cousins looks like the final piece to the proverbial puzzle for the Vikings in terms of the different styles of games they can win. Over the past few years, the one type of game I didn’t think the Vikings could win was a shootout. Fortunately, Zimmer’s defense has prevented the Vikings from being in that position. Cousins lifts a lot of pressure off that group.

7
Going punch for punch with the Rams, beating the Eagles, should have pulled the W in Green Bay. Hiccup against the Bill's but everyone has them. Defense looking better. If the running game can get traction we should still be able to win the division.

It would be nice to get the running game going, but is it absolutely necessary? I’m not sure that it is. Let Cousins keep slinging it and get Dalvin Cook involved in the passing game to utilize his talents.

I'm slightly more optimistic after the defense finally looked somewhat like its old self last Sunday. I still don't like that we don't even try to run the ball, however.

The schedule is still gonna be tough and we have ground to make up, but right now put me at 6 1/2.

The schedule the rest of the way reminds me a lot of last year. A relatively easy stretch before the bye followed by a few tough games and important divisional contests. From that perspective, I actually like the way the Vikings’ schedule looks the rest of the way.