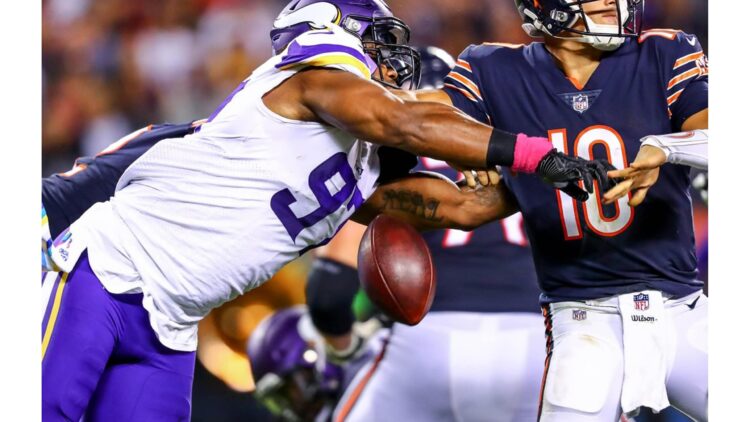 The Minnesota Vikings will travel to Soldier Field on Sunday night to battle the Chicago Bears for the NFC North lead. It’s clearly the most important game of the season to date for the Vikings.

I usually try to avoid optimism about the Vikings. I’d rather expect little and be pleasantly surprised by the success of the Vikings rather than expect a lot only to be greatly disappointed.

But I have an unusual amount of optimism about the Vikings for this week’s key matchup against the Bears. Hence, the high Skol Scale rating you’ll see shortly.

Yes, I’m fully aware of the lack of success for the Vikings at Soldier Field over the past decade. I’m also aware of Chicago’s vast improvement from a season ago.

But Chicago is not better than Minnesota. Not right now.

If you’ve watched the Vikings defense since the Week 4 embarrassment against the Rams, you’ve seen the most dominant unit in the NFL. Danielle Hunter has emerged as a serious Defensive Player of the Year candidate. The pass rush has generated 21 sacks the last four games, including 10 against the Lions in a Week 9 win. Additionally, Minnesota remains No. 1 in the NFL in third-down defense, holding opponents to a 25.7% conversion rate.

Head coach Mike Zimmer has created and executed the most exotic blitz packages in the NFL since taking over as Vikings head coach, and it’s a big reason why the Vikings absolutely dominate on third down.

Also, the top-graded QBs against the Vikings' blitz since 2015 (Kirk Cousins No. 1)

Vikings blitz has been outstanding pic.twitter.com/5u4BcBUIvr

Now we’re getting into why I’m so optimistic about this matchup.

The Vikings should dominate Mitch Trubisky on Sunday night as long as Zimmer blitzes whenever he can.

According to Pro Football Focus, Trubisky’s passer rating when not pressured is a comfortable 109.8 with 8.3 yards per attempt. Pretty freaking solid numbers.

PFF is a bit more extreme than I am on the dislike for Trubisky’s play. The platform’s WAR (Wins Above Replacement) metric grads Trubisky at -2.53, which is literally the worst in the NFL.

The second-year quarterback is definitely a playmaker, especially when he escapes the pocket. Plus, new head coach Matt Nagy has been phenomenal in helping Trubisky get the ball out quick and creating positive opportunities. But if forced to withstand pressure in the pocket and deliver throws down the field, mistakes are likely to ensue.

The formula seems pretty simple to me for the Vikings defense — blitz the heck out of Trubisky, and good things will happen.

Offensively, Minnesota has a tall task in dealing with this Chicago defense that’s ranked No. 4 in both points and yards allowed.

Chicago’s pass rush is probably the best Minnesota has faced this season. Khalil Mack quite literally requires two blockers, and that sometimes isn’t enough. Then you have Leonard Floyd, Akiem Hicks, and Aaron Lynch — among many others — to worry about. Keeping Kirk Cousins clean has to be Minnesota’s No. 1 priority on the offensive side of the ball.

But, as Vikings Territory colleague Nick Olson points out, Chicago’s defense has actually performed below average based on its opposing quarterbacks.

Bears' Expected Passer Rating Against: 74.6 (easiest in the NFL)

The Bears' pass defense has been outstanding, but adjusting for the QBs they've played (Peterman, Osweiler, etc.) have they actually been below average?

Chicago has faced the following quarterbacks this season:

Those QBs equate to the lowest expected passer rating against among any team in the NFL. Upper-echelon quarterbacks like Rodgers, Brady and Osweiler have given the Bears defense fits and I feel like most would put Cousins somewhere between those three dynamos.

Stefon Diggs and Tom Compton are also slated to return from injury this week, both key contributors for the offense over the first nine weeks. This unit appears to be as healthy as it has been all season and is coming off a bye week.

This offense could give Chicago some problems.

The Vikings didn’t even play last week and they jumped a half point on the Skol Scale. This is with a Bears win included.

This matchup against Trubisky has become more appetizing with each time I look at it. Minnesota’s blitz is one of the most effective in the NFL. Trubisky’s production falls off a freaking cliff when he’s pressured. That should equate to success as long as Zimmer dials up blitz after blitz to generate that pressure.

Also, the Bears have to play the Sunday night game and then turn around and play the 11:30 a.m. Thanksgiving game at Detroit next week. It’s quite possible the Bears fall to 6-5 by Thanksgiving day.

Also, the Packers are in shambles and handed away a win to Seattle last night to fall to 4-5-1.

Things are falling into place for the Vikings. The injury report is shrinking. Zimmer’s defense is returning to 2017 form. Minnesota enters its most important stretch of the season fresh off a bye week.

I’m not about to guarantee the Vikings win the next two games against the Bears and Packers to vault themselves to 7-3-1 before traveling to Seattle.

But I’m not not guaranteeing it either.