The Vikings Have Everything You Want In a Passing Offense, and More 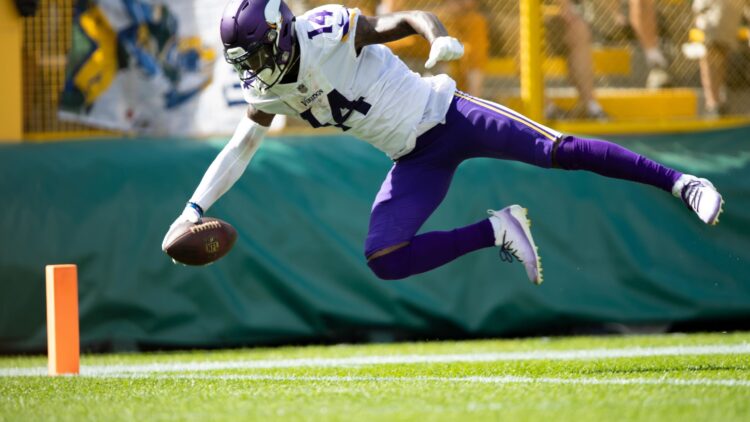 Mike Zimmer has the fourth-best win percentage among active qualified NFL coaches.  He’s achieved that largely by relying on a stout defense and game-managing offense to grind out wins.

But he’s never had a high-powered offense engineer a late-game comeback like the Vikings did last week.

The Vikings have all the pieces in place for an elite passing offense: through two weeks, the Vikings have the third-best QB grade, the fourth-best pass blocking grade and the fourth-best receiving grade.  Kirk Cousins just had the best game of his career, and John DeFilippo is busting out play calls that are receiving praise from national analysts.  If the Vikings keep that up, this team might have an even better offense than their defense.

Kirk Cousins Just Had The Best Game of His Career

Cousins has started 59 games in the NFL, and this last game against Green Bay earned him the highest single-game grade in his career.  He is currently has the third-best grade among all quarterbacks.

According to the NFL’s official play-by-play data, the Packers had a 98.1% chance of winning on Sunday before Kirk Cousins threw this touchdown pass to Adam Thielen, while getting drilled by Mike Daniels:

Up 8 points, with just 37 seconds left in the game, the Packers rush only 3 and play Cover 2 man with a robber (two high safeties, plus an extra defensive back roaming the middle of the field playing robber, with the cornerbacks in man coverage)—basically dedicating everything they have to coverage to stop the pass.  John DeFilippo and the Vikings dial up a perfect counter to that play call: Thielen is running an out-and-up route from the slot, while Diggs runs a post from the outside.  The routes criss-cross upfield, like a scissors concept, which freezes the high safety on the right in place until Cousins makes the throw:

Cousins threads that pass through one of the tiniest windows you will ever see in the NFL—again, while getting drilled by a 310-pound defensive tackle.  It’s honestly one of the most impressive throws I have ever seen.

And the wildest thing is, Cousins had multiple throws on the game that were nearly as impressive.  Midway through the 4th quarter, Kirk Cousins threw a pinpoint bomb to Stefon Diggs for a 75-yard touchdown:

Per the NFL’s Next Gen Stats, that pass traveled 62.9 yards in the air.  That is longer than any single pass from the entire 2017 NFL season.  And Cousins’ pass hits Diggs on a rope, right in stride, with Diggs barely having to make any adjustment to the ball:

The Vikings currently have the fourth-best receiving grade among NFL teams.  Adam Thielen is currently 6th in the NFL in receiving yards, with a top-ten PFF grade, and Stefon Diggs is 18th, with the 17th-best PFF grade, as well as 3 TDs and a two point conversion.

Diggs showcased one of the most impressive routes on the season so far on the Vikings’ two-point conversion to send the game to overtime:

Diggs earns a huge amount of separation immediately on this route, and is wide open in the corner of the endzone after just a few steps.  Brad Kelly does a great job breaking down the details of Diggs’ route here:

•Staying light on his second step allowed for the hard plant + sell inside
•Eyes inside sold Slant on the CB who was peeking in the backfield
•Low pads + level shoulders allowed for the seamless C.O.D pic.twitter.com/rjF5KbFAfL

And to top it off, Diggs makes a great, full-extension catch to tie the game up.

This throw nearly hits the ground, but Diggs has no issues making a great adjustment to reel in the touchdown.

And as good as Diggs has looked, Thielen has looked arguably even better.  Looking back at Thielen’s last-second touchdown, notice Thielen’s ability to adjust to the ball and wait to put his hands up until the last moment:

That’s a savvy, veteran move from Thielen.  Thielen has to turn around and adjust to the ball at the last second.  He makes the adjustment, and because Jaire Alexander is trailing behind him, watching Thielen’s hands to reach out and deflect the pass, Thielen barely moves his hands at all and instead just lets the ball just fall into his lap.  If Thielen plays this any other way, the pass gets broken up.

Thielen had over 100 yards on top of that crucial touchdown, including this 25-yard gain that set up what should have been the overtime game-winning field goal:

Thielen is running a deep crosser from the slot, which is set up by Stacy Coley running a go route to clear space underneath, and by great protection from the line against a blitz.  Thielen, for his part, gets a great release,  establishes inside leverage and makes a great adjustment upfield to the ball, catching it with a full extension.

Diggs and Thielen combined for 259 yards and three touchdowns in this game.  Last year, they were both top-ten-graded receivers, and from the look of things, they might be even better this year.

The Vikings’ Pass Protection Is Surpassing All Expectations

The Vikings currently have the fourth-best team pass blocking grade in the NFL, one spot ahead of the Philadelphia Eagles.  Here are all the grades and ranks of the starters:

Overall, that’s pretty solid, and in pass protection, it’s phenomenal.  Granted, San Francisco and Green Bay are not known for their edge rushers, but what they lack in edge talent they make up for with studs along the defensive interior like DeForest Buckner or Mike Daniels.

What’s more, with Pat Elflein projected to return as early as this week, the Vikings will be getting a huge upgrade at maybe their weakest point on the line.

On this rep, O'Neill mirrors Nick Perry, shoves him into Remmers, then picks up the stunt & easily washes out Clay Matthews. Great read, footwork and pad level, but what really stands out is the agility–he makes it look so easy. pic.twitter.com/PnjFHPen0E

While O’Neill did struggle against power, his agility, footwork and ability to recognize and pick up stunts were all outstanding.  He is already looking like he could become something special, and he may have shown enough this past Sunday to earn a starting role in the very near future.

John DeFilippo Is A Genius

We had already pointed out one play from DeFilippo that was earning praise from national analysts, but let me conclude with a video breakdown of my favorite play from the game:

Prior to the snap, Cousins sends Diggs in motion, closely watching the cornerback (Tramon Williams) to see if he follows Diggs across the formation.  He does.  That signals man coverage, and Cousins knows he has a touchdown here before the ball is even snapped, because this play is practically unstoppable against simple man coverage.

After motioning across the formation, Diggs cuts back inside, and once he’s across the formation, the ball is snapped.  Diggs already has a huge head start on his route, and Williams is desperately trying to catch up.  But Williams has no chance, because on the far side of the field, the 6’6″ Kyle Rudolph runs straight into the 5’11” safety and sets a pick, which Diggs has a clear route past, but Williams has no chance of getting around in time.  Diggs is wide open and makes a nice snag for the TD.

This is a brilliant play call from DeFilippo, scheming a wide open, easy touchdown in a very constricted space.  Against the right read, I’m not sure how defenses can stop it.

The Vikings have everything you could ask for in a passing offense—great quarterbacking, great pass blocking, great receivers and a great offensive coordinator calling plays.

And even all that is on top of other weapons like Dalvin Cook, who currently leads the entire NFL with 18 broken tackles, or Kyle Rudolph, who last year had the best catch rate among all receiving TEs, or David Morgan, who was the #1 blocking TE in the NFL last year, and on, and on.

We knew coming into this season that the Vikings had a top defense.  With Matt Wile shining (2nd best grade and 2nd best hangtime among punters) and with the Dan Bailey signing, they’re poised to have a top special teams unit as well.  And with Cousins, Diggs, Thielen and DeFilippo, they seem to have finally built an elite passing attack.