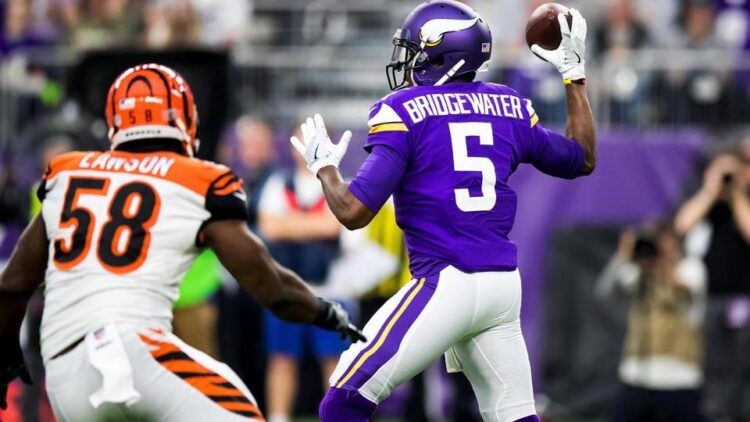 One of the most common criticisms of Teddy Bridgewater’s quarterbacking is his deep ball: talking heads frequently deride his deep passing, claiming that his arm strength and deep accuracy rank among the worst in the league. Analysts cite it as a driving factor as to why the Vikings might want to move on from Bridgewater. Fans perceive it as one of the key things holding Bridgewater back from being the quarterback of the future.

But is that true? Is Bridgewater a bad deep passer?

Pro Football Focus doesn’t seem to think so: they graded Bridgewater as above average in 2015 on passes more than 20 yards downfield. The Deep Ball Project, which reviews and grades every deep pass from every quarterback, doesn’t seem to think so either: they gave Bridgewater a “B” grade based on his 2015 deep ball tape and noted that his deep ball accuracy was 52.6% (ranking 12th of 33 overall).

So which is it?

I wanted to find out for myself, so I re-watched and charted all 87 deep passes Bridgewater attempted in 2015. In fact, I went ahead and compiled the All-22 of every single deep attempt from Bridgewater in 2015 in the video below. So while I have my own analysis about Bridgewater’s 2015 deep passing further below, as Reading Rainbow would say, you don’t have to take my word for it:

Perhaps the main reason most folks think Bridgewater’s deep ball is lacking is his box score stats: of Bridgewater’s 87 deep passing attempts (defined by Game Pass as any pass that travels 15+ yards past the line of scrimmage) in 2015, only 34 passes were completed, for a 39% completion percentage, 831 yards, three touchdowns, and eight interceptions. That’s good for a passer rating of 47.6, which by any measure is awful production.

But how much of that awful production can really be attributed to Bridgewater? By my charting, Bridgewater was accurate on 52 out of 87 deep attempts – good for an accuracy percentage of 60% — almost double his completion percentage. By my count, 10 out of 87 incompletions were accurate, contested passes that you would reasonably expect the receiver to bring down. Another 5 incompletions were straight up dropped, going right through the receivers’ hands despite there being no defenders contesting the catch. That is 17% of Bridgewater’s passes that should have been caught, but that the receivers failed to bring in.

If you’re wondering how that is possible, consider that Mike Wallace was the Vikings’ No. 1 wide receiver, who led all position players in snap count in 2015.

Bridgewater’s strengths and limitations become even clearer once we break down his deep attempts by route: 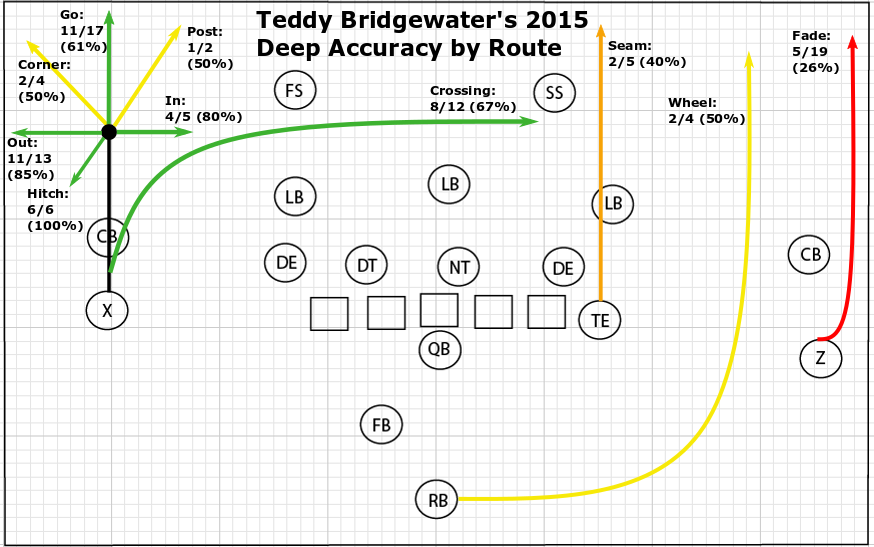 On the other hand, Bridgewater struggled a bit with vertical routes. He particularly struggled with fade routes, where the receiver (often Mike Wallace) sprints down the sideline to the end zone on the outside shade of the outermost corner. Wallace, despite his speed, often struggled to separate from cornerbacks, and moreover often got outboxed and pinned right next to the sideline, giving Bridgewater the tiniest of windows to hit.

However, even after accounting for his supporting cast, Bridgewater still underperformed on vertical routes, being accurate on 20/45 (44%) of all go routes, fades, seams, and deep wheel routes. 44% accuracy on vertical routes isn’t worst in the league, but it’s at least slightly below average.

Bridgewater’s vertical inaccuracies stem from his propensity to overshoot his targets: of his 87 deep attempts, 19 passes (22%) were overthrown.

Still, when you factor in all deep throws — power throws, anticipation throws, vertical routes, and everything else — Bridgewater was accurate on just under 60% of his deep throws. That’s not bad. It’s not even average. It’s solidly above average.

So to revisit our initial question: is Bridgewater a bad deep passer? He may struggle with vertical routes at times and he may not have the strongest arm in the league, but after accounting for receiver error, as The Deep Ball Project and Pro Football Focus both found, Teddy Bridgewater comes out as one of the better deep passers in the league.

Don’t believe me? Watch the tape and decide for yourself: