The Four Norsemen of the Apocalypse 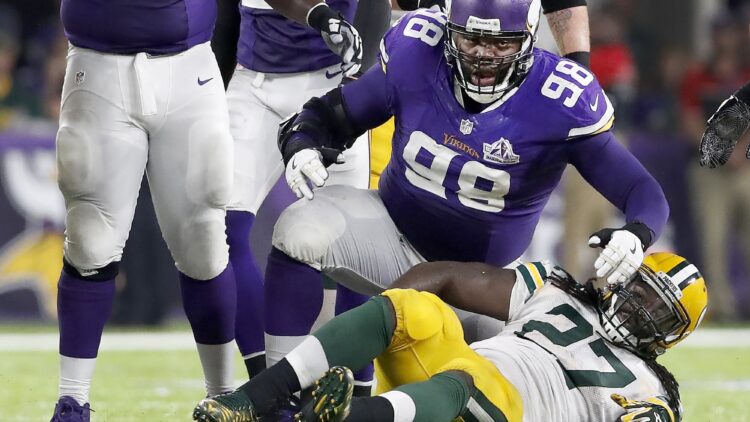 The Purple People Eaters are back, and they might be better than ever.

Last Sunday against the 49ers, the Vikings’ front four notched an absolutely absurd 21 pressures over 30 pass rushing snaps.  That’s over half as many pressures as Jimmy Garoppolo had dropbacks—and that’s just from the front four.

Right now every single player on the Vikings’ front four is playing like a pro bowler.  Starting with Sheldon Richardson:

Sheldon Richardson Is Everything Mike Zimmer Dreamed Of, And More

Back in April I wrote about how big of an addition Sheldon Richardson could be for the Vikings defense, and still I could have never predicted just how dominant Richardson would look in his Vikings opener.

Yet somehow that still that understates just how big of a difference Sheldon Richardson made.  The Harrison Smith interception that sealed the game?

It was Sheldon Richardson’s hit that caused the errant throw that created it.

The 30-yard bomb to George Kittle that could have swung the game, had it not been dropped?

It was Sheldon Richardson’s hit that forced the overthrow that helped create the drop.

It was Sheldon Richardson throwing the left guard aside and collapsing the pocket that set up Griffen for the sack.

Danielle Hunter’s goal line sack?  You get the idea.

Sheldon Richardson might show up in the stat sheet with just a half-sack and a handful of tackles.  But on film, basically half the time the defense did something good, Sheldon Richardson was the secret reason why.

That’s true of the run defense as well.  On the goal line run stop fumble recovery, it was—guess who—Sheldon Richardson who ragdolled the lead blocker and was first to meet the running back:

Richardson then held the running back in place for Linval Joseph to poke the ball out while the back tried to stretch across the goal line.  Harrison Smith recognized it, dove on the ball, and the 49ers walked away from their 14-play drive with zero points.

Richardson had other highlight-reel run stops and pressures, including tackling an outside zone run for a loss all the way from the weakside, beating a double team to create a run stop for no gain, and chasing Garoppolo on a scramble across the field for a shoestring tackle.  You can watch more broadcast highlights here.  Alternatively, you could just rewatch the game, because #93 was making plays nearly every time he stepped onto the field.

Danielle Hunter Is Only 23 Years Old, But He Might Be the Best Pass Rusher On the Vikings

Danielle Hunter is the only starter on the Vikings’ defensive line who has yet to be named to the pro bowl.  And yet he might just be the best player of all four.

Hunter was an absolute monster on the edge on Sunday, creating 2 sacks (one called back on penalty), 2 QB hits and 8 total pressures.  Again, that is more pressure than six entire NFL teams from this past weekend.  His second sack was a thing of beauty:

For his first couple years in the NFL, Hunter was a rotational pass rusher who got by mostly on his freak athleticism, using his burst, bend and length to speed rush into the quarterback.

This play showcases that elite burst and bend, but Hunter beats the tackle here not with athleticism but with crafty hands-fighting.  Hunter bursts off the line upfield, feinting a speed rush, but notice how he double clutches his hands up—the first time to bait the tackle into punching, the second time to swipe the tackle’s punch away.  That’s a veteran move that knocks the tackle off-balance and lands him on all fours in the turf.

The tackle actually trips Hunter up as he falls to the ground, but Hunter recovers, bends and leaps into the quarterback like a wildcat for the sack

Hunter was making plays like that all day—you can see all eight of his league-leading pressures here.  One particularly impressive pass rush involved bull rushing Joe Staley—the #1 tackle in the NFL per PFF grading last year—straight into Garoppolo:

This bull rush showcases so much of what makes Hunter special.  When you combine…

The product is maybe the best pass rusher on the Vikings.  Which is saying something.

And as good of a pass rusher as Hunter is, he might be an even better run defender.  Hunter had three run stops on Sunday, including this highlight:

Hunter keeps his shoulders square to the line of scrimmage and fends off the offensive tackle with essentially one arm, while simultaneously outrunning Matt Breida (who ran a 4.37 40) to the edge and wrapping him up behind the line of scrimmage.  Absolutely ridiculous.

Linval Joseph Is A Black Hole of Destruction

Last year Linval Joseph was dominant against the run, tied with Von Miller for the 5th-most run stops among defensive linemen, and he was a force against the pass as well:

Linval Joseph is the only nose tackle in the NFL who had more than 18 pressures on the season.

So last Sunday was in some ways just another day in the office for arguably the best nose tackle in football.

Still, until offenses learn to stop running the ball anywhere near Linval Joseph, it bears emphasizing just how much of a bad idea that is:

Joseph had four run stops on Sunday, clipped above (although on the last run play, Joseph himself doesn’t make the tackle—instead he bench presses the guard into the running back for the tackle).

What makes Linval Joseph so good?  It’s actually pretty simple: He’s big.  He’s strong.  He’s smart.  And he’s quick.  Hear it from his divisional opponents just how unblockable he is:

Joseph has 34 ½” arms, longer than most left tackles, weighs 330 pounds of nearly pure muscle, and will beat even the quickest offensive linemen to their gap, even on sweeps and outside zone plays across the field.  And last Sunday was no different.

That length and power makes Joseph’s bull rush nearly unblockable; he demands a double team at all times.  When he’s not double-teamed, bad things happen:

And because Linval Joseph demands multiple blockers, that sets up Sheldon Richardson, Danielle Hunter and Everson Griffen with one-on-one matchups, which they can usually win.  Individually, they’re all great players, but as a unit, they’re practically unblockable.

When Healthy, Everson Griffen is a Defensive Player of the Year Candidate

Everson Griffen notched ten sacks through eight games last season before completely tearing his plantar fascia in week 8; he still finished the season with 13 sacks and All-Pro honors.  He’s maybe the best speed-to-power rusher in the NFL (here he is bulldozing Terron Armstead), and for my money, he’s also got the best spin move (and reverse spin move) in the NFL.

On Sunday, Griffen notched four pressures—good enough for the 15th-best pass-rushing productivity among 91 starting defensive linemen.  That may pale in comparison to Danielle Hunter (who ranks second) or Sheldon Richardson (who ranks 5th, and first among DTs by a longshot), but consider that Hunter largely matched up against a rookie, and Richardson matched up against backup right guards after Mike Person was injured.

Everson Griffen matched up the vast majority of his snaps against Joe Staley—PFF’s #1 offensive tackle last year.  Griffen gave Staley his lowest grade since 2016, and his second-lowest grade in the last five years.

How did Griffen make Staley look bad?  With a detailed plan of attack:

Griffen doesn’t have Hunter’s raw physical tools—he has shorter arms, and his combine and pro day numbers were fairly pedestrian.  What Griffen does have, is a relentless motor and a technical refinement that would make Mr. Miyagi proud.  On the play above, Griffen first bursts upfield and converts his speed to power.  Staley gets rocked back and tries to get his hands on Griffen, but Griffen intercepts Staley’s punch and swipes it away, knifing inside for the hit.  Unfortunately for Griffen, Garoppolo escapes and throws a Rodgers-esque touchdown pass to Dante Pettis, but this is still a great rep for Griffen.

Staley is too good to beat with one simple move, so Griffen had to continue to chain moves together to keep getting to Garoppolo:

Griffen starts this pass rush bursting upfield, then waiting till the last moment to bust out his one-armed bullrush.  Griffen drives into the pocket with his legs while using his other hand to prevent Staley from getting a grip.  Once Griffen gets close to the quarterback, he swims inside for a big QB hit.

Griffen was also a force in the run game, notching three run stops of his own:

Griffen is so powerful at the point of attack, so smart with his hands and so unrelenting with his motor that he becomes a heat-seeking missle in the run game.  Between Linval Joseph and Sheldon Richardson anchoring the middle and Griffen and Hunter setting the edge, it will be very difficult for teams to run against the Vikings’ front four.

In just thirty pass rush snaps on Sunday, the Vikings’ front four produced more pressure than four NFL teams could, combined.  While under pressure, Garoppolo went 5/15 with two interceptions (including a pick-six), and the Vikings gave him his worst passer rating as a starter by a mile:

Jimmy Garoppolo's passer rating as a starter, game by game:

Individually, they’re each great players.  But together?  The Four Norsemen are bringing the apocalypse.