The Art of Route Running 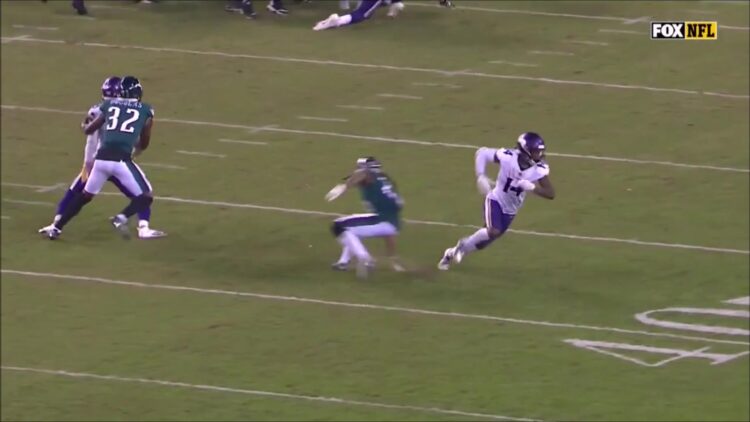 There are maybe five elite route runners in the NFL.  Two of them are on the Vikings.

Last Sunday in Philadelphia, Adam Thielen and Stefon Diggs put on a route-running clinic.  Together, they put up almost a year’s worth of highlights from this one game alone.  What makes them so good?

Stefon Diggs vs. Ronald Darby, Round 1

Darby matched up against Diggs in press man coverage.  The result was the NFL equivalent of getting dunked on:

There are three key parts to every route:

Darby here is lined up in press coverage, close to the line of scrimmage, meaning Diggs has to (1) get a clean release upfield and avoid the jam and (2) “stack” the corner by maintaining his position, straightening his route, and getting even with the corner.

Diggs releases quickly and cleanly here with a quick jab outside before stemming inside.  Darby presses aggressively, trying to disrupt Diggs’ timing and route by using his arm to force him further inside.  Diggs responds with his own arm bar to stay on a straight line upfield.  Then at the break, Diggs plants his left foot and suddenly, explosively cuts outside.

Other receivers just can’t stop and redirect on a dime like this.  It takes a ridiculous level of ankle and hip flexion to decelerate and turn like this.  Darby certainly wasn’t expecting it.

Diggs sells the break extremely well, too: immediately before his break step, he cuts even further inside, with his whole body—head, shoulders, even hips—pointed inside: 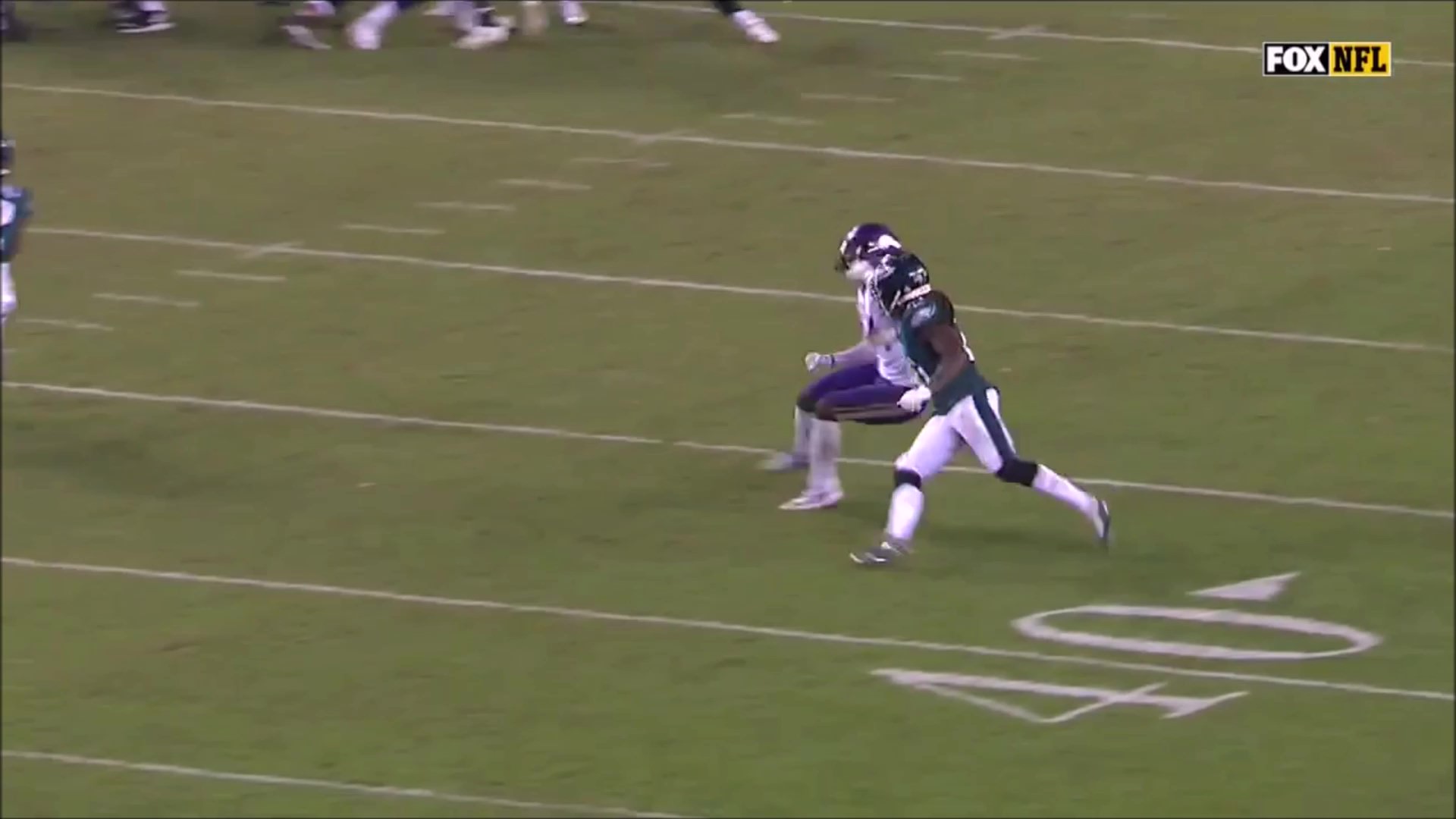 Less than a half-second later, his entire body is moving the other direction: 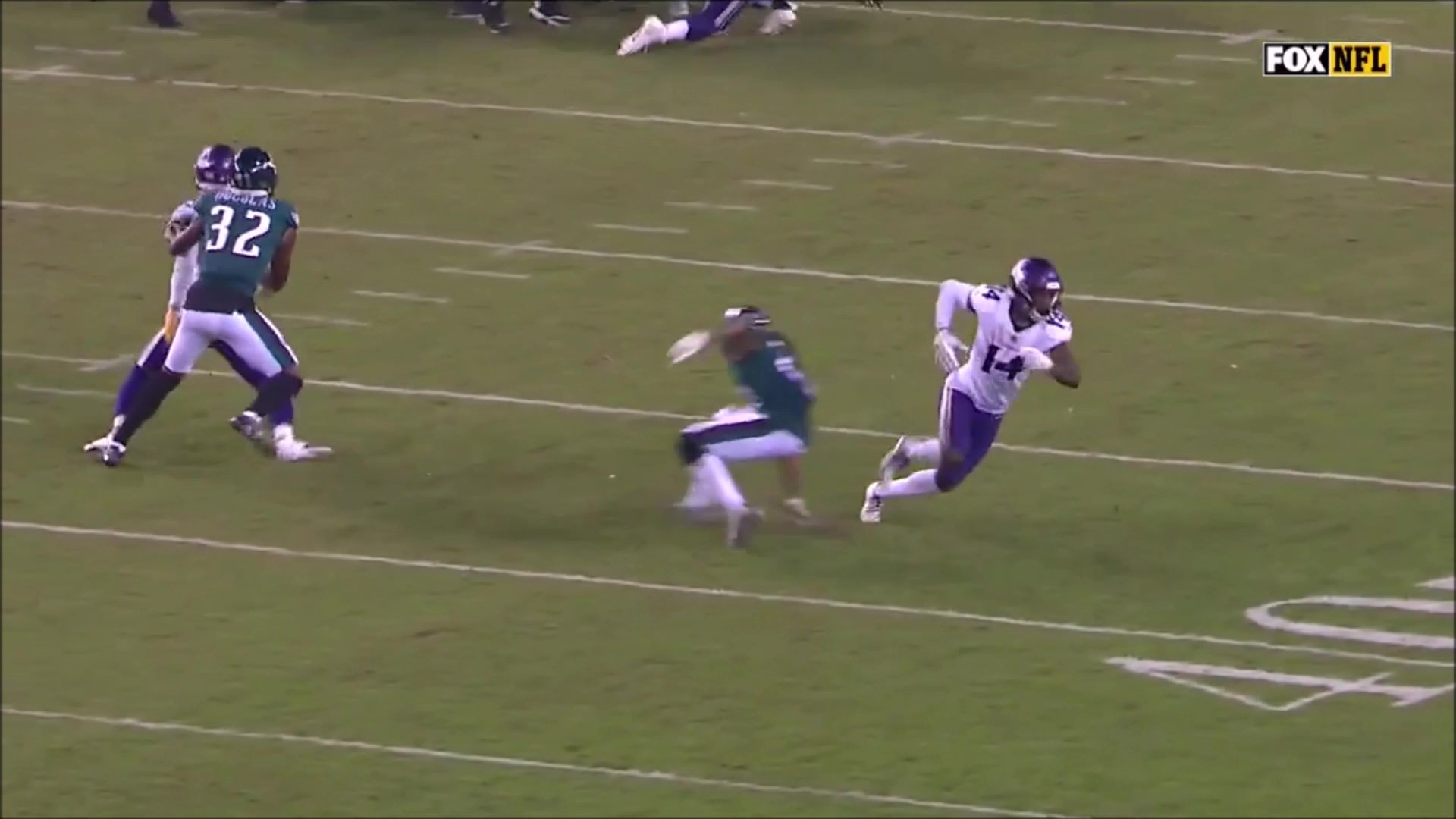 Human beings aren’t supposed to be able to move like this.  When they do, it’s uncoverable.

Stefon Diggs vs. Ronald Darby, Round 2

This pass from Cousins went incomplete, but the route is nevertheless worth highlighting:

Here Darby is playing very soft in off coverage, so Diggs’ only job at the release and stem is to burst upfield and close the cushion as quickly as possible.  And he does just that, with a great first step and burst upfield.

But what makes this route noteworthy is how Diggs is able to get five yards of separation on a fade route against a corner lined up 8 yards off the line of scrimmage.

Diggs sinks his hips so low here that he’s almost sitting down midsprint, which allows him to jab outside (signalling a go route) before violently jabbing inside (signaling a post route).  That inside jab step is paired with a great head fake inside, which together make Darby bite inside.  Diggs does all this while at a full sprint, which is how he’s able to create so much separation with just two steps upfield.

Adam Thielen vs. Jalen Mills, Round 1

This route from Adam Thielen went for 24 yards:

Like the first clip above, Thielen release inside against press coverage.  Thielen does an outstanding job stacking the corner here—after releasing inside, he bursts upfield, and within five steps Mills is trailing behind him.

With inside leverage, trailing in man coverage, Mills is in a tough spot.  If Thielen cuts inside here (which is where you’d expect a receiver that releases inside to go), he’s toast.  That’s a big reason why he bites so hard on the stutter step here from Thielen.  And because Thielen was lined up in a condensed set (close to the offensive line), he has plenty of space to work back to the ball, and makes a great diving catch for 24 yards.

Thielen vs. Jalen Mills, Round 2

By far the biggest play of the game came on first-and-ten from the Vikings’ own five yard line.  DeFilippo took a big chance and called a shot, and Thielen made it pay off to the tune of 68 yards:

Thielen aggressively stems this route right into Jalen Mills, then gives another head shimmy and stutter step.  That forces Mills to come down to play the route, and as soon as Mills breaks, Thielen cuts back upfield.

Mills tries to get a hand on Thielen to force him into the sideline and slow him down, but Thielen adroitly swats it away while tracking the deep pass from Cousins.  Cousins’ pass hits Thielen in stride, and that accuracy allows Thielen to lose the safety and take this ball for 38 yards after the catch.

Both Diggs and Thielen have the versatility to line up and win their matchup anywhere on the field.  Here, Diggs lines up in the slot to beat Sidney Jones:

This is a simple seam route that Diggs wins by stemming his route outside towards Jones’ outside shoulder.  Right before the break, Diggs leans his head and shoulders outside, getting Jones to turn clockwise upfield, exactly as Diggs breaks back inside.  Jones does a good job getting back in position, but turning the wrong way gives Diggs inside leverage that, paired with a perfect pass from Cousins, nets the Vikings 25 yards.

The Vikings’ one offensive touchdown on the game came on this goal line toss:

If you watched the Packers game, this route might look familiar.  Thielen releases and stems his route inside, and at the break his entire body—head, shoulders, knees and toes—is pointed inside: 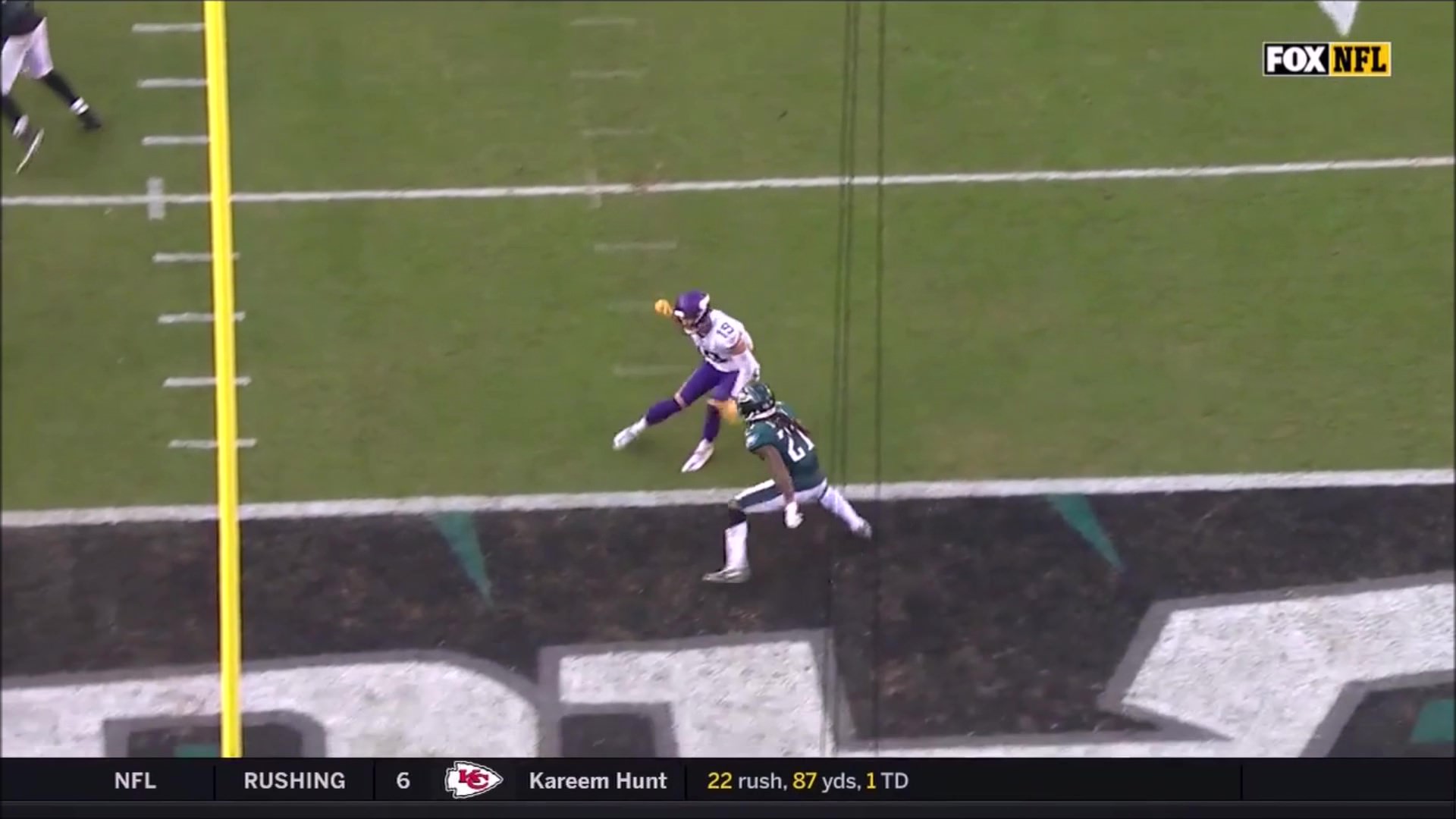 That gets Darby to bite inside, enabling Thielen to swim past Darby back outside.  Darby knows he’s beat and grabs Thielen’s chest in an attempt to slow Thielen down, but despite the defensive hold, Thielen is able to reel this pass in for the score.

In Conclusion, Diggs and Thielen Are Good

At this point we are running out of superlatives to adequately describe just how good Adam Thielen and Stefon Diggs are playing.  They’re explosive and evasive off the line of scrimmage, speedy and sturdy in their stems and can cut on a dime.

But why read about it when you can just watch it?