How Kevin Stefanski Turned the Vikings’ Offense Around 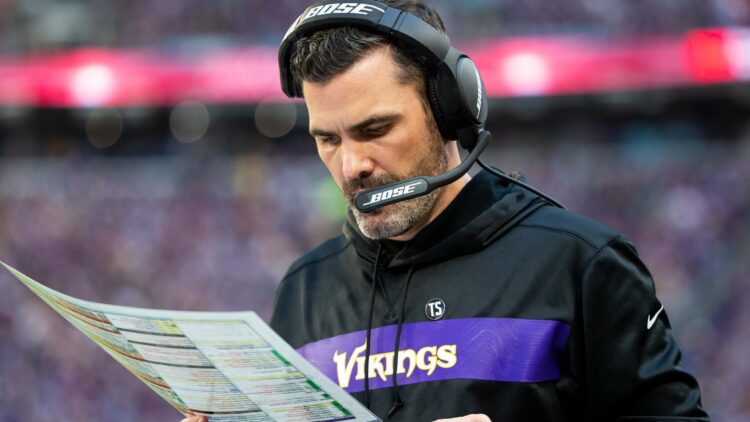 Kevin Stefanski’s first quarter as the Vikings’ offensive coordinator literally could not have gone any better: three drives, three touchdowns, 21 points and over 200 yards—the most of any team in the NFL in the first quarter this year.

One week after scoring zero points until garbage time, the Vikings’ offense put up a season-high 41-points and a season-high 220 rushing yards.

Under John DeFilippo, the Vikings’ offense averaged 1.76 points per drive—8th-worst in the league.  In the Vikings’ first game under Kevin Stefanski, the offense averaged 3.42 points per drive.  Yes, it’s a small sample size against a below-average defense, but that would rank first in the NFL on the year, ahead of the Saints and Chiefs by a wide margin.

Where did this offense come from?  What changed?

That would rank second-most in the NFL, behind only Sean McVay (who has used it on 36.0% of dropbacks), and slightly ahead of Doug Pederson (30.8% of dropbacks) and Andy Reid (30.1% of dropbacks).

Needless to say, that is some good company for offensive play callers.

Increased use of play action is huge for a number of reasons.  The first and most obvious is that play-action passing is significantly more effective than non-play-action passing.  That is true of NFL teams generally, but it’s even more true of Kirk Cousins specifically: over the last three seasons, Kirk Cousins leads all quarterbacks in the NFL in passer rating on play-action passes.  Even Jalen Ramsey has noted that “Coming off the play action, [Cousins is] the best quarterback in the league.”

But perhaps an even bigger reason for the increased usage of play action is how much it helps out the offensive line.  By selling the run block before dropping back to pass protect, the offensive line buys itself additional time while keeping defenses honest from selling out against the pass.  And on play-action boots and rollouts, the quarterback is on the move, which again keeps defenses guessing and reduces the chances that the offensive line gives up pressure.

Keeping the defense guessing through play action was how Stefanski earned his first touchdown as a play caller:

The Vikings came out of their previous play in hurry-up mode to get the defense to scramble and make a mistake.  Stefanski called a play-action bootleg that got the defense to do just that.  The play action sucks up the linebackers away from the play, the rollout gives Cousins a clean platform to throw the ball and Diggs’ fake run block allows him to slips past the secondary.  The cover-3 corner crashes down to play the run, and Diggs is left wide open in the end zone for seven points.

If that play looks familiar, it’s because that is almost exactly how Pat Shurmur scored his first touchdown with the Vikings in 2017: using the hurry-up offense and a play-action bootleg to forced a busted coverage leaving Diggs wide open in the corner:

Even the 3×1 formation and pulling guard blocking scheme are the same.

Last year, Case Keenum was fourth in the NFL in play-action passing under Pat Shurmur.  It’s no coincidence that Stefanski is emulating what worked for Shurmur: in Stefanski’s first game as OC, Cousins went 6/7 on play-action passes for 103 yards, a touchdown and a perfect 158.3 passer rating.

Laquon Treadwell averaged 39 offensive snaps per game under John DeFilippo.  Under Kevin Stefanski, that number was cut nearly in half, down to a season-low 22 snaps.

In Treadwell’s wake, the Vikings saw a season-high 64 combined snaps from David Morgan, Tyler Conklin and CJ Ham.  The dividends were immediately apparent:

After Diggs’ first touchdown, the Vikings next two drives ended on touchdown runs set up in part by David Morgan and CJ Ham.  On the first run from Dalvin Cook, Morgan occupies the edge defender while Ham blocks the SAM linebacker.  When the hole between those blockers closes up, Cook has the vision and burst to bounce to the outside and beat everyone around the edge for the score.

On the second run from Murray, Morgan washes the edge defender completely out of the play, and Ham gives just enough of a block on the SAM backer to spring Murray free.  Murray goes untouched for over ten yards, and with one stout stiff arm puts the Vikings up 21 points.

That is how the Vikings racked up over 200 rushing yards.  Stefanski gave Cook a season-high 19 carries, and Cook repaid him with two touchdowns, nine avoided tackles and 163 yards from scrimmage—an average of 8.2 yards every time Cook touched the ball.

Even when the blocking wasn’t there, Cook was creating magic:

From the end zone view here, you can see how not a lot goes right here: Morgan trips, Elflein gets blown up, Rudolph loses his block and Cook is hit twice in the backfield.

But it doesn’t matter.  Cook spins, jukes and bursts to the edge to turn what should have been a tackle-for-loss into a home run.

And using the big guys helped in the passing game as well.  Tyler Conklin wound up as the team’s leading receiver, thanks to Stefanski scheming him wide open on two huge passes:

The second play, the Vikings are in 22 personnel on third-and-one, so the defense is 100% expecting a run.  Except this is another play action pass, and the Dolphins bite it hook, line and sinker.  Conklin is left about as wide open as you get for 33 yards.

Mixing Up the Snap Count

One of the best ways to help a struggling offensive line is to vary the quarterback’s cadence when he snaps the ball.

Take the 40-yard touchdown bomb to Aldrick Robinson—that play came on a surprise silent snap that caught the defense completely off guard:

From the end zone view, you can see just how late the Dolphins’ pass rush was off the snap.  The surprise snap bought Cousins extra time and set the offensive line up to succeed, which crucially gave Robinson enough time to get 40 yards downfield for the touchdown.

Or take the Vikings’ first touchdown to Stefon Diggs.  On the play immediately prior to that touchdown, Cousins had a heavy hard count, hiking the ball on the third count (listen and watch here).  Then on the touchdown pass, Cousins hiked the ball immediately on the first soft count.  Varying the snap counts keeps the defensive line on their toes, makes them a split-second late off the snap and gives the offensive line a slight advantage in being the first to the punch.

Varying the snap count also helps the run game.  Watch and listen to this play, where Cousins’ triple count gives the Vikings’ offensive line the advantage, helping set up each block on this inside zone play:

From the end zone angle,  you can see how the snap count made the defensive line late on their first step, which set up each block for a huge hole for Dalvin Cook.  This 20+ yard run was called back on a holding call on Tom Compton, but the play still showcases one way Stefanski turned one of the NFL’s worst rushing attacks into something formidable.

Varying the snap count and using hard counts can also trick the defense into showing their hand.  On this play, Cousins uses his hard count to tease out the blitz.  Once he knows the blitz is coming, he also knows Diggs is one-on-one on the outside running a deep curl route.  In one-on-one coverage with a well-timed pass, that’s nearly impossible to stop.  And with Cousins’ read and throw, it’s a quick 17-yard pickup.

One final thing that hard counts and mixed snap counts can do (as any fan who has watched Aaron Rodgers will know) is draw the offense offsides.  That’s exactly what happened on this play, where Cousins took a 50-yard shot to Adam Thielen downfield after drawing the nose tackle offsides.  Thielen isn’t able to beat the off coverage, but if Cousins can continue to play his hard count right, Thielen likely makes this play next time around.

So how did Stefanski post the Vikings’ best offensive game of the season?  He took a page from his mentor, Pat Shurmur:

First, he relied heavily on play-action passing to scheme Cousins clean throwing platforms with boots and roll-outs and to scheme receivers open downfield.

Second, he used heavy personnel to create explosive running plays, and explosive passing plays when the defense was expecting run.

Lastly, he used varied snap counts to catch defenses off guard and make sure his offense was the first to the punch.

The Vikings may not score over 40 points in their remaining games this season.  But regardless of the scoreboard, Kevin Stefanski seems to have uncovered a sustainable recipe for success that can be replicated in the next couple games going forward.