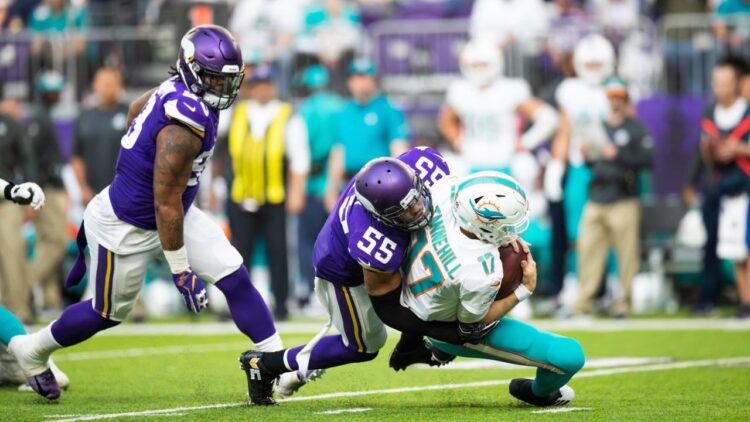 After being named to his fourth-straight this week, it almost seems like a foregone conclusion that Anthony Barr will be a pro bowler every year. However, his future with the Vikings is nowhere near as certain. Barr’s contract is up after this season, and fans seem to be split on whether bringing him back is worth the lofty price he’ll certainly demand – and that price is going up by the day.

I’m here to say he’s worth it, and then some.

Barr is a unique player. His blend of speed, power, and strength make it impossible to predict what he’ll do on any single snap. He’s fast and agile enough to cover among the best coverage linebackers in the game, strong enough to control a gap and stop the run, and is one of the most efficient and powerful pass rushers on the team. While he may not routinely pad the stat sheet like he did last Sunday, his mere presence on the field forces opposing offenses to account for him in a way that few linebackers do.

When asked what it is about he last month that’s spurred Barr’s excellent stretch of play, coach Mike Zimmer said “He’s always been a good player. I think he’s probably taking it to another level right now…maybe ask him.”

“I do what I’m asked to do” Barr said. “I think everybody gets caught up in numbers and stats and all that. I may not blow you away, but I think I bring a lot of other things to the table that may go unnoticed from the common eye.”

I concede it’s no coincidence I’m picking the Dolphins game to make my point. Barr finished the game with five tackles, two sacks, and two additional QB hits…but that doesn’t give a complete picture of how he broke this game wide open. Let’s go beyond the box score and break down a few plays that can help shed some light on what makes Barr so special.

Playing For the Win, Not the Box Score

The first play we’ll take a look at is the Dolphins’s third offensive snap of the day:

Barr is the reason this play changed from a healthy first-down gain to a tackle in the backfield. Barr recognizes the play is a sweep to the boundary side away from him and times the snap perfectly, crashing into the backfield before the handoff is even completed. Instead of going straight for the difficult shoestring tackle around RT Ja’Wuan James (who is pulling to lead block for Gore on the sweep), Barr surprises him with an aggressive push directly into Gore’s path, allowing Hunter to clean up behind him.

This isn’t a play your typical linebacker can finish. Barr was only able to get in front of James with a perfectly-timed jump on the snap, and was only able to hold his position in front of the larger player due to his size and strength. Barr knew he had Hunter playing the backside edge, and completely blew up the play by taking away the schemed running lane, forcing him into Hunter’s waiting arms.

Getting to the Quarterback

Barr creates opportunities for his teammates, but sometimes he gets home too:

This is one of Barr’s flashier plays from the game, but I think it deserves a deeper look. First, the obvious – for the second time this game, Barr timed his blitz perfectly to the snap of the ball and caught the man assigned to block him (RB Kalen Ballage) unprepared, leading to a big play in the backfield. Part of what makes play action so lethal to a blitzing linebacker is the risk of picking wrong – that is, if this play had been a hand-off, Barr would’ve been caught chasing a player without the ball. Generally the solution is for the defender to let up for a beat and identify who has the ball before continuing the rush, which puts them at a disadvantage since this requires sacrificing a little power.

However, Barr didn’t hesitate at all on this play – and if you shift your focus to Eric Kendricks, you can see why. Barr knew he was safe to ignore the play action fake to Ballage because Kendricks was sliding over to fill his vacated gap, while Harris jumped in and filled for Kendricks. The risk with a blitz like this one is that shifting coverages around in this way can sometimes leave a receiver open downfield for a larger gain than is normally available. Take a look at the all-22 view of this play:

When Anthony Harris steps up to cover the gap Kendricks vacates, he leaves the entire center of the field open to any inside-breaking routes. As it happens, WR Danny Amendola is running a deep dig route across the field. Trae Waynes was set up to fail in coverage on this play, but because we were blitzing Barr, it didn’t matter. The snap was over before Amendola even looked up for the ball.

Barr easily chops Ballage’s last-ditch punch away before sacking Tannehill to close out a well-designed blitz. A perfect defensive call for this snap from Zimmer, but not a call likely to succeed without a linebacker fast enough to get to Tannehill before he identified the wide-open Amendola and took the free first down.

Making Plays From 20 Yards Away

The final play we’ll look at is early in the fourth quarter:

This is a play we should all recognize by now – the Vikings have run it on third down several times already this season. Anthony Barr is lined up next to Everson Griffen well outside the LT Laremy Tunsil, and is threatening to blitz. You can see that before the snap, Tannehill shifts protection (in the form of RB Kenyan Drake) to the left side to account for Barr. Once the ball is snapped, Barr immediately drops off into coverage, leaving Drake alone looking for someone to block while Alexander books a free trip to the quarterback on the side Tannehill just removed protection from.

There are two important qualities a linebacker must have for this play to work. First, the defense needs to respect their ability as a pass rusher enough to adjust their protection to account for them pre-snap. And second, that linebacker needs to be able to hold their own in coverage, since the RB would have the option to release downfield after seeing the linebacker drop off the line of scrimmage. These are two skillsets that rarely coincide in a single player, but when they’re both there, it can lead to plays like this.

Barr may not rack up sacks or tackles for loss like we want him to, but his versatility is the reason the Vikings currently lead the NFL in sacks. Barr will be a free agent this offseason, but if the Vikings are smart, they’ll pay him whatever it takes to keep him around.