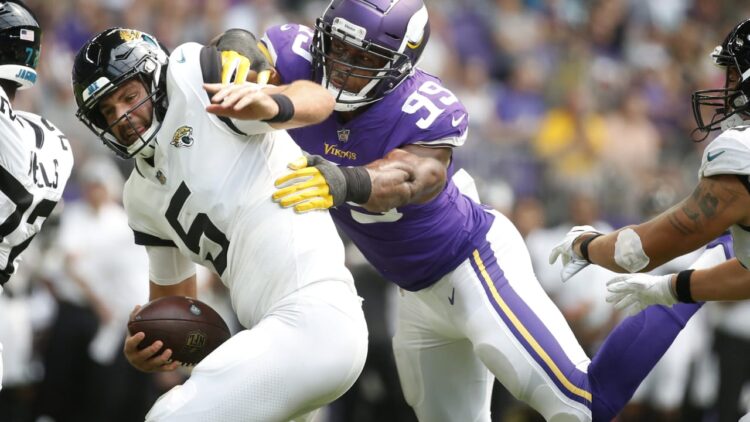 Winning in the preseason is less about point totals and more about staying healthy and getting better.

Unfortunately, the Vikings lost in both ways on Saturday in their preseason home opener against the Jaguars: the team lost 14-10 and, on top of that, saw six players injured.

Nevertheless, there were still some major positives to take away from the game: Danielle Hunter was unstoppable, Mike Boone had a breakout game, and the offensive line generally played better than expected:

Danielle Hunter Was A Game-Wrecker

To put into context how insane that is, elite edge rushers (like Von Miller) generate pressure on roughly 18% of snaps.

Hunter generated pressure on 54% of snaps.

You can see how much more technically refined Hunter has become: he’ll bait the tackle into a bad punch, then neutralize them entirely with a swipe; he’ll stab the tackle and use his length and burst to win on the edge; and on the sack, he cleanly swats and swims past the tackle and uses his long arms and tight grip to bring the QB down.

Last year, Everson Griffen was on pace to contend for Defensive Player of the Year before his plantar fascia injury.  And now he might be the second-best edge rusher on the Vikings.

And yet somehow even that understates how good Boone looked.  78 of Boone’s yards (86%) came after contact.  In other words, of the 7 yards per carry that Boone averaged, six of those yards per carry came after Boone ran into a defender.  Boone broke three tackles on just 13 carries.

But we didn’t know Boone’s athletic testing would translate to the football field like this.  Boone’s explosiveness to the edge in this game and his ability to churn through contact for first downs and touchdowns alike, along with his ability as a receiver (DeFilippo has said Boone “runs really, really good routes out of the back field”), may have just earned him a roster spot.

The Vikings went into the game down four starting offensive linemen (Easton, Elflein, Remmers and Hill), facing arguably the best pass rush in the NFL.  And despite the Jaguars keeping their starters in for half the game, the Vikings held up fairly well.

Brian O’Neill was a particular bright spot: he had a perfect game (allowing zero sacks, hits or pressures) for the second week in a row, and additionally did a great job in the run game pinning his defender and connecting at the second level to create chunk plays.  Two pass sets in particular stand out:

In the two clips above, O’Neill (#75 at RT) stonewalls two speed-to-power moves with good hands placement and great feet to establish and re-establish leverage.  That is notable because Zimmer noted that Collins started in this game over O’Neill due in part to Collins’ ability to handle power.  O’Neill went a long way on Saturday to assuage that concern, proving that he can handle power, along with anything else rushers might throw at him.

And O’Neill was not the only lineman to have a great game.  Backup center Cornelius Edison was perhaps even more impressive in pass protection, and Danny Isidora (aside from one whiff that resulted in pressure) was very solid as well.

Perhaps the only poor performance came from Aviante Collins, who drew the short straw and had to go one-on-one against Yannick Ngakoue, losing several reps:

Collins (#76) was beaten to the inside, outside and down-the-middle on the edge.  He fared much better, however, once he moved to the inside (and was no longer on an island against a pro bowler).  He did earn the best run blocking grade on the team, and had a great downfield block on a screen, but he is still a work-in-progress in the passing game.

But considering the strength of competition and the injuries, overall the offensive line did well, which is certainly encouraging.

Let me conclude by highlighting the Vikings’ highest-graded and lowest-graded players on the game:

Morgan finishes in the top five for the second week in a row, quietly putting together a great game where he opened giant holes in the run game and had one catch for seven yards (all YAC).  Conklin and Treadwell also had quietly strong games, getting open frequently despite not seeing many targets.  Conklin also blocked well in the run game, and may have pulled ahead in the race for the TE3 spot with it.  And at 66.0, Brian O’Neill barely missed the cut for the top-five.

Eric Wilson again makes the top-five cut this week: he was everywhere, recording a sack, four (!) run stops and a forced fumble.  And rookie corner Craig James may have earned himself practice squad consideration with a run stop and pass breakup, allowing two completions on 3 targets for just ten yards.

In contrast to last week, Cousins played poorly.  He missed easy passes, failed to see open receivers, failed to climb the pocket (making his tackles look worse off) and made bad decisions with the ball:

The Vikings’ offense only dropped 21 passes all of last season, but they struggled to hold onto the ball on Saturday, resulting in a low grade for Wright along with several other receivers.

Barr and Downs generally struggled to defend screen passes or passes to the flats; Barr was also largely responsible for Bortles’ 14-yard scramble that set up the Jaguars’ only touchdown.

I do disagree with Mike Hughes’ grade; I thought he played very well even with the play where he fell down in coverage along the sideline.  Let us know in the comments if there are any other grades you agree or disagree with.