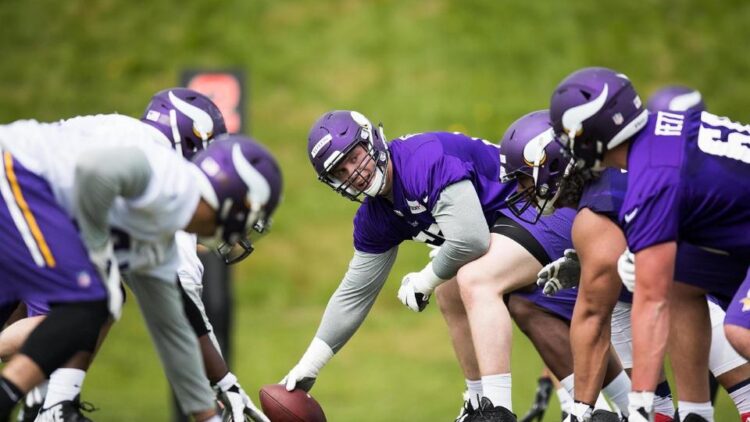 We’re halfway through the NFL season, which means one thing — let the mock drafts begin.

The Minnesota Vikings are 6-2. They’ve won four consecutive games and their franchise quarterback could return to the active roster any day now. All is well in Vikings Territory (see what I did there?). With the team enjoying a bye week, there’s not a whole lot going on. Even so, it’s way too early to start talking about the 2018 NFL Draft… right?

No, apparently it’s not. But this a good one.

[quote_box_center]”The offensive line has gotten a lot of love from Minnesota the last year or so, but Hernandez may be too good to pass up. There are still questions at guard up front, and Hernandez brings a physical run-blocking presence who has surrendered only two pressures in the last two years. Hernandez posted the top overall grade among guards in 2016 at 95.3 and he’s currently second at 90.5.”[/quote_box_center]

As Palazzolo stated, the offensive line was a main focus of the Vikings front office last offseason. However, there is still work to be done.

The Vikings will be on the market for an offensive lineman after the season. Starting right guard Joe Berger is expected to retire after the season, so the team will need to find his replacement. Starting left guard Nick Easton has been serviceable when healthy, but his 41.2 PFF grade up to this point has been less than desirable.

The Vikings could replace Berger with one of the backups, Danny Isidora or Jeremiah Sirles. But, selecting a guard like Hernandez could give the team a potential starter as well as flexibility. Slotting Hernandez (6-foot-3, 330 pounds) between left tackle Riley Reiff and center Pat Elflein, who are both physical players in their own right, could provide the Vikings with a stable left front for years to come.

His hand usage is solid. Seems to always be in control of his assignment and makes them go where he wants them to go. pic.twitter.com/VXzFIzuNjK

Even though zero guards were taken in the first round of the 2017 draft, I have no problem with the Vikings doing it next April. Hernandez was a key contributor at UTEP last season when now-Packers running back Aaron Jones ran for 1,773 yards and 17 touchdowns. Imagine what he could do for a healthy Dalvin Cook.

After watching game film on Hernandez, the guy looks the part of an All-American guard from UTEP. He grades out well in both the run and pass game, has the size of an NFL guard, and could start right away. But is he worth a first round pick?

Here are my reservations: First and foremost, this draft is deep in interior offensive linemen. Secondly, he must embody the type of lineman Sparano is looking for. I’m not sure if he does. And lastly, UTEP is currently 0-8. Call me old fashioned, but I like winners. Now clearly, that’s not all on Hernandez, but because of those factors, I’m hesitant to draft him in the first round.

Jordan and I both agree. Hernandez may not be considered a “bonafide” first-round pick, but he has a definite chance of being selected as one. Either way, I would applaud this pick. He’s considered the best guard in the country.

I would like to see how he plays alongside NFL talent. Scouting Hernandez in the Senior Bowl or a collegiate all-star game surrounded by better players could be the key to determining his value.