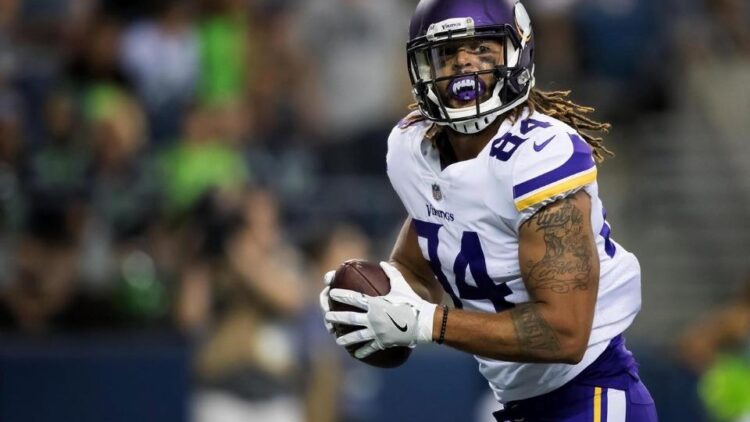 Bucky Hodges on the Rise

Historically, the Minnesota Vikings have lacked a one-two punch at tight end. The last time the Vikings had two tight ends catch more than 30 passes in a season was in 2013, when Kyle Rudolph missed eight games due to injury. That season, Rudolph had 30 catches and John Carlson had 32. Before that, the last occurrence was in 2002, when Jimmy Kleinsasser had 37 receptions and Byron Chamberlain had 34.

This offseason, after Ellison signed with the New York Giants, the Vikings attempted to add another weapon to their tight end arsenal. Free agent Jared Cook, known for his downfield pass-catching skills, came to Minnesota for a visit, but he ultimately joined the Oakland Raiders.

Enter rookie Bucky Hodges. The raw-but-talented receiver that plays tight end may be just the player the Vikings have been searching for. Realistically, it’s too early to predict a 30-plus catch season for Hodges in 2017, but if he can make strides developing his technique, the sky is the limit for the 22 year-old.

Friday night, Hodges caught the first touchdown of his young NFL career. During the Vikings’ second preseason game in Seattle, Hodges caught two passes for 54 yards, including this 21-yard touchdown from Taylor Heinicke:

Like any rookie, Hodges needs time to learn the intricacies of the position. But, there’s a reason ProFootballFocus compared him to Jimmy Graham. The Vikings’ sixth-round pick in April’s draft possesses natural receiving skills that make him an immediate threat to opposing defenses.

Despite his career drop rate of 8.28 percent in college, Hodges caught 20 touchdown passes at Virginia Tech. He also caught a total of 133 passes. Both are school records for a tight end. In his three years as a Hokie, Hodges never gained fewer than 526 yards in a season.

Listed at 6’6″ and 257 pounds, Hodges’ size and agility stand out. His 4.57 40-yard dash time at the NFL combine is impressive for a player of his stature. His ability to line up as a tight end or wide out will create mismatches against shorter linebackers and safeties, which in turn will give the Vikings a leg-up in the passing game, specifically in the red zone.

In order to showcase his receiving skills in the NFL and earn a significant role on the Vikings’ offense, Hodges must be able to block, or at least learn how to become a serviceable in-line blocker.

In college, Hodges simply did not block; that’s the largest reason he fell to the sixth round of the draft. Playing in an up-tempo, pass-happy scheme, Hodges was utilized solely for his pass-catching ability.

“I would say now, blocking our defensive ends, that’s the biggest difference. I didn’t have to do that in college,” Hodges recently told Vikings.com.

Blocking is the single largest facet Hodges will have to improve to see playing time in Pat Shurmur’s offense. The more Hodges shows he is capable of blocking, the more opportunities he’ll receive in the passing game.

Shurmur has been impressed with what he’s seen from Hodges up to this point:

[quote_box_center]”Bucky, I think he’s improved steadily throughout when he first came here. Obviously for a guy that was involved in a pro system for the first time, it was a little slow-going. But as time has gone on we’ve seen steady improvement in each practice, and I think it carried over into the game the other night. He’s a tall guy that runs real well and he made a couple nice catches there in that two-minute drill.”[/quote_box_center]

Looking to seize his opportunity

Working in Hodges’ favor are his fellow tight ends. Teammate Kyle Rudolph has the most touchdown catches by a tight end in franchise history. Second-year standout David Morgan has received praise from Vikings head coach Mike Zimmer for his exceptional blocking skills. Hodges will develop soundly if he utilizes both these players as mentors.

Rudolph and Morgan are locks to make the team. While Hodges is currently listed at the co-number three tight end on the current depth chart with Kyle Carter, he doesn’t sound too worried about making the team:

[quote_box_center]”I’m a playmaker. I feel like I can find a way to get on the field as a tight end. I can implement my own game, my own little style into it.” Hodges continued, “I’m just looking forward to winning. I love winning. I want to help this team be a great team. I feel I can help a lot. I try to keep working every day. Whether it’s on my blocking, pass-catching, everything. I feel like I’ll never have a ceiling. I can always get better. I can bring a different dynamic to the offense.”[/quote_box_center]

The new number 84 has shown the same confidence and charisma as the last Vikings player to don 84. Now, it’s time for Hodges to make his mark in the NFL. With Rudolph entrenched as the starter and Hodges sneaking up the depth chart, the Vikings may have finally landed the jab-hook combo they need to stun their opponents.