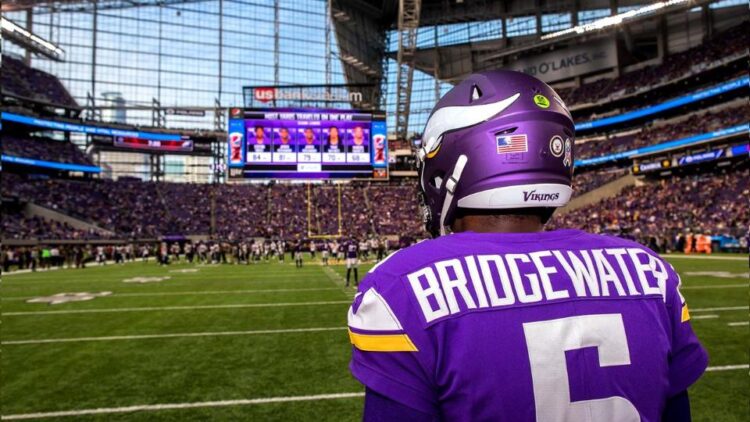 Teddy Bridgewater, Case Keenum and Sam Bradford are all scheduled to be free agents after the season. Who can the Minnesota Vikings afford to keep as their future quarterback — or should I say quarterbacks?

Case Keenum has proven his doubters wrong week in and week out. He keeps winning, and he keeps adding millions to his 2018 payday.

Since the Vikings have already won this week, let’s sit back and take a look at the team’s unique quarterback situation and how much money the former backup can expect to make next year.

Due to lingering knee issues, it’s safe to say Sam Bradford is not part of the Vikings future plans. In theory, taking number eight out of the equation should make things easier for the team’s front office, but things may not be as cut and dry as the team expected.

Teddy Bridgewater has returned to the field, but not as the starter. The much-anticipated “Teddy Time” homecoming has been delayed until further notice due to the strong play of Keenum.

It’s a good problem to have. But, as the Vikings Territory team analyzed during our most recent Roundtable discussion, the team may face a difficult financial decision this offseason regarding the most important position in sports.

Chris Tomasson of the Saint Paul Pioneer Press spoke with Jason Fitzgerald, who runs OverTheCap.com. In Tomasson’s article, Fitzgerald predicts Keenum could command up to $15 million per season this offseason. That’s quite the raise from the $2 million contract he signed with the Vikings last offseason.

“A lot will depend on how the year ends, but based on how he’s doing right now, if I had to put an estimate on it, I would say he probably is going to get a contract worth about $15 million a year, like three years, $45 million,’’ said Fitzgerald, who added the guaranteed money would likely be front-loaded in the first year of the deal.

If Keenum leads the Vikings to an extended playoff run, Fitzgerald predicts he could command upwards of $18 million. He doesn’t envision a scenario of Keenum earning the franchise tag, which is worth more than $20 million.

Keenum has completed 218 of 330 (66.1%) passes this season for 2,476 yards with 14 touchdowns and five interceptions. His QB rating is currently 78.8 and his passer rating is 96.2. He has led the Vikings to seven straight wins and has been a key factor in the team owning a 9-2 record and a three-game lead over Detroit in the division.

Keenum’s play has been good enough to keep Bridgewater on the bench and keep Bradford a distant memory.

Bradford will likely become a free agent in March. If healthy, Fitzgerald believes he could be offered a short-term contract somewhere in the $6 million to $7 million range next season with plenty of incentives. Bradford, making $18 million with the Vikings this season, was placed on injured reserve November 8th.

The Vikings would like to see Bridgewater in action this season so the team can make an evaluation for the future. Even if Teddy remains on the sidelines, Fitzgerald said he can still see the Vikings signing him to a short-term deal worth roughly $6 million to $7 million per season (with a lot of incentives). He pointed out that Robert Griffin III received $6.75 million guaranteed from Cleveland when he came off injury.

When asked how things will play out, Fitzgerald offered his prediction:

“My guess is they probably keep Keenum and Bridgewater,’’ Fitzgerald said. “I think that’s the best scenario for them and then they really decide in the future who the (starting) quarterback is unless Keenum leads them to the Super Bowl.’’

In this scenario the Vikings would pay a little more than $21 million to keep both quarterbacks next season. Even with potential extensions looming on the horizon, that’s a very manageable figure for the Vikings. The team is projected to have roughly $57 million in cap space this offseason.

Keenum has had a terrific season up to this point and he should be recognized and rewarded for what he’s done. However, l think he’s being overvalued. I don’t see him signing for anything more than $15 million next season unless he leads the Vikings to a Super Bowl victory.

Under Shurmur, the Vikings offense is a strength. In fact, it may have developed into a system like the Patriots’ in which any capable quarterback will have success when put under center. That may sound crazy, but look at Bradford’s performance in Week 1.

We’ve seen many positives from Keenum this season and very few negatives. Is he the product of a personnel-fitting philosophy, an improved offense line and dynamic, play-making receivers? I don’t know. I want to say he’s been more than that, but only time will tell if can he continue performing at this level.

The rest of the season will determine Keenum’s value.

At this point I’m with Fitzgerald. I would argue the Vikings should do all they can to try to re-sign both quarterbacks. Having both Keenum and Bridgewater on the roster next season could give the Vikings a huge advantage over the rest of the league.

I’ll leave you with this random Vikings quarterback fact.

Since Brett Favre threw 34 touchdown passes in 2009, the Vikings have had the following single-season passing touchdown totals, courtesy of Vikings.com: