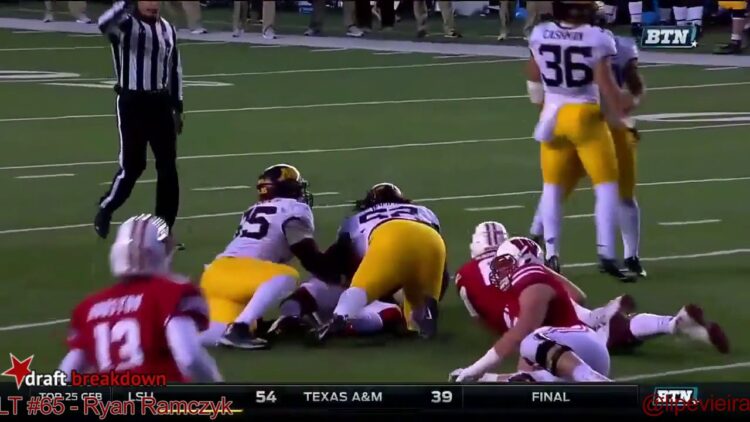 Technique: Ramczyk’s technique, both on the ground and in pass protection, are among the best, if not the best, in this class. In 2016, he didn’t block like a player who had no former Division I experience.

Several fundamental aspects go into evaluating an offensive tackle’s technique; his awareness of the quarterback, his ability to stay on his toes, and his quickness to get into a stance after the snap, to name a few. But for Ramczyk, one technical trait jumps out immediately. When he’s drafted in April, Ramczyk will instantly be one of the NFL’s most patient left tackles. Patience doesn’t initially sound like a trait for a left tackle, but for one with Ramczyk’s athleticism (more on that later), patience can be used to gain a significant advantage over a pass rusher.

Take the above clip as an example. Ramczyk’s athleticism allows him to maintain proper position longer than a typical left tackle would against that speed rush. He waits for the pass rusher to attack before making any contact, and by that time, the quarterback has already gone through multiple reads down the field. Ramczyk shows good awareness of his quarterback and maintains sound balance when forming a pocket. Additionally, he uses his hands well to initiate contact and keeps his head up upon such contact.

He experienced rare lapses during the season, at times reminding fans of T.J. Clemmings’ kick step posture — leaning too far forward, in other words. For this reason, Ramczyk was beaten early against Michigan by a handful of spins, but quickly made adjustments to his stance to counter the defenders’ go-to pass rush move.

Ramczyk is also a mauler in the ground game who shows the ability to move large masses of humanity with ease. He was assigned several crackdown blocks as part of the Badger rushing attack and consistently pushed interior defensive linemen off the ball. While his explosion off the line of scrimmage isn’t fantastic, his use of strength is exceptional. Ramczyk generates power from his ever-churning legs when engaged in blocks, allowing him to open up truck-sized holes for lead blockers and ball carriers.

Athleticism: Ramczyk’s athleticism is worth mentioning as much as possible; it’s what will likely separate him from the rest of the 2017 class. There are very few human beings on this earth that possess the lateral agility and quick footwork Ramczyk does, especially those standing 6’6″ and tipping the scale at 314 pounds.

Ramczyk’s combine results will surely give us a better hint at just how elite his athleticism is, but for now, what he has shown on the field provides ample evidence. Many opposing rushers thought they could use a speed rush to get around Ramczyk. Unfortunately for them, they were wrong more often than not.

Ramczyk uses his quick feet in combination with poise and patience to stay in position for a long time. In the above clip against LSU, Ramczyk doesn’t immediately square up with the rusher across from him. He slow-plays the snap with the intention of deciphering a stunt or blitz but is still able to recover and protect his quarterback’s blindside thanks to his impeccable footwork.

He also isn’t afraid to get downfield on run or screen plays to throw blocks for ball carriers. Still, most of Ramczyk’s duties at Wisconsin came at the line of scrimmage, where he was consistently stronger and quicker to the punch than his opponents.

Production: Ramczyk’s on-field product provides him a stellar resume. Pro Football Focus ranked Ramczyk as the best run-blocking tackle in college football during the 2016 season. Additionally, Ramczyk only allowed 12 pressures in pass protection, which math majors will tell you is less than one per game. These numbers alone put Ramczyk in the top two tackles in the class, at the very least.

Inexperience: The former Badger only has one season of Division I football under his belt. Before his time at Wisconsin, Ramczyk played for Division III Wisconsin-Stevens Point. His production is undoubtedly impressive regardless of his inexperience, but the inexperience is certainly a reason for scouts to shy away from Ramczyk.

Injury: Injuries undoubtedly hurt a player’s draft stock, and that’s no exception for Ramczyk. Five days after the end of the Badgers’ season, he underwent surgery to repair a torn labrum. The hip injury and subsequent recovery are expected to take four months, keeping Ramczyk off the field until April.

It’s no secret the Minnesota Vikings could use an offensive lineman or two or seven. It’s also no secret that Minnesota’s most needy position is left tackle. Ramczyk would go a long way in solving both of those problems. His athleticism and adaptability would allow him to potentially earn a starting spot in 2017 protecting Sam Bradford’s blindside.

General manager Rick Spielman would likely have to swing a trade for Ramczyk to ever land in Minnesota. The Badger is projected to fall off draft boards before the second round, and “Slick Rick” does have the ammunition to trade back into the first. The question is, will he take such a risk on a rookie left tackle?