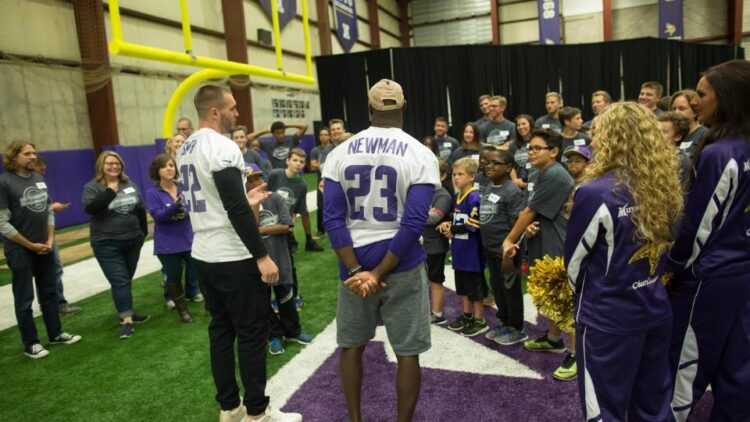 So what went down during the Mini Mutiny in Green Bay last season? Did the players disobey Zimmer? Did he lose control of the team? Well, according to Minnesota Vikings cornerback Terence Newman, it wasn’t what you think.

What happened during the game in Green Bay on December 24, 2016?

In a recent story by Brian Murphy of the Pioneer Press, this is what Newman says happened: Vikings head coach Mike Zimmer assigned the team’s top corner, Xavier Rhodes, to shadow Packers star receiver Jordy Nelson everywhere on the field.

That is indeed what happened, per Newman, until Nelson motioned to the other side of the field. On those occasions in the first half, Newman, as well as a banged-up Harrison Smith, matched up against Nelson.

Against the defenders not named Rhodes, Nelson couldn’t be stopped. He finished the game with nine catches for 154 yards and two touchdowns. It was one of the best games of Nelson’s career.

Zimmer recognized the mismatches and felt as though his defensive backfield went rogue. He spoke to the media about the issue before discussing it with his players.

Newman on Zimmer’s handling of the mutiny

[quote_box_center]”It upset me for the simple fact that there was time after the game where nothing was ever said, nothing was asked (by the media), I felt like that whole thing could have been explained and understood,” Newman said. “I could have been saved. My character was put (into question). ‘Maybe this guy’s character is a little different’ (or) ‘OK, he’s supposed to be a tough head coach and his players are going against him.’ We both could have saved each other (from) some negative stuff if we could have just communicated and talked about it. It didn’t happen. We both learned from it, and it is what it is.”[/quote_box_center]

The miscommunication did not tarnish the bond between Newman and Zimmer, who was his original position coach in Dallas in 2003. Newman went on to state that if things weren’t good between him and Zimmer, he wouldn’t have re-signed with the Vikings.

The 15-year vet signed a one-year contract worth $3.25 million in March.

[quote_box_center]”I’ve seen it before. I was here (in Dallas) when (Bill) Parcells hung mousetraps around saying, ‘Don’t bite the cheese.’ Cheesy, yeah. But at the same time, if you’re 53 people together and you understand you can’t bite the cheese, they’re telling us we’re great. As soon as you believe you’re great, and you stop working for it, you’re not going to be worth a damn. That’s the truth,” said Newman.[/quote_box_center]

Last week, Zimmer offered an open opportunity to Newman; a coaching position after he retires.

[quote_box_center]”I don’t know about coaching,” Newman said. Maybe I’ll be a scout or something, where I don’t have to deal with players because there are some players that I would…You remember Latrell Sprewell and P.J. Carlesimo? There might be a story like that but the reverse, where the coach chokes the player. But I think I’d have to do some scouting stuff. I have a different feeling than how the millennials are. A lot of guys rely strictly on their talent. They don’t put everything together. They don’t do the film work.

I put in a lot of film. I had Mike Zimmer as my coach. He challenged me. He’d say, ‘Hey, when you come in tomorrow, I want to know the routes they’re running.’ He’s the guy that got me to watch the film the way I watch it. I remember there were games I can hear him call out plays and I’m like, ‘Yo, how did you know that?’ It’s simple. He watched that much film. He saw a formation and knew exactly what was going to happen. So I wanted to be able to do that. So I started watching more and more film to be able to call out plays.”[/quote_box_center]

Despite being the second oldest defensive player in the NFL (Steeler James Harrison is 39), Newman said he hasn’t even thought about coaching yet. He’s still focused on one thing — winning a Super Bowl. Another thing holding Newman back from coaching is his stellar play. The 2003 fifth-overall pick was rated ninth among NFL cornerbacks by Pro Football Focus in 2016.

Third-year cornerback Trae Waynes has evolved into a starting-caliber corner under the guidance of Zimmer and Newman. That means less playing time for the veteran. However, Newman should continue to play a fundamental role in the defensive backfield. He will compete with Mackensie Alexander to start in the slot.

Newman has also played a little safety. Considering the Vikings surplus depth at cornerback and shaky depth at safety, it’s reasonable to assume the talented veteran could make a position change if he isn’t able to beat out Alexander as the starter.

Newman is by far the oldest player on the Minnesota Vikings roster. The 38-year-old cornerback will turn 39 on September 4th. The two second-oldest players, Joe Berger (35) and Brian Robison (34), have already hinted at retirement after this season or next.

Despite his ability to turn back the clock, you still have to wonder, will 2017 be the last season for the timeless Newman?