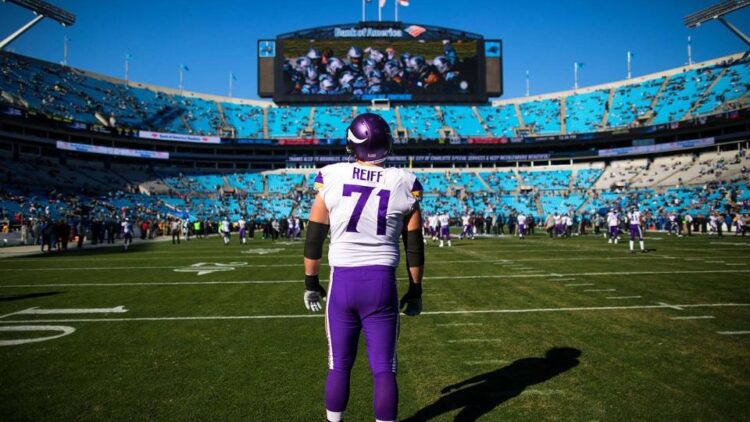 What a difference a week makes.

Minnesota Vikings head coach Mike Zimmer isn’t always a happy man. That statement is especially true after his team suffers a loss. One can imagine reviewing game film the next day and reliving the mistakes his team made doesn’t exactly make Zimmer a jolly person. Needless to say, he wasn’t in a great mood at his weekly press conference Monday.

After a weekend loss to the Carolina Panthers in which multiple players left the stadium hobbled and in walking boots, Zimmer naturally fielded questions early and often regarding injury updates.

When he was first asked if he thought the team would be at full strength this upcoming Sunday, Zimmer didn’t have much of a response.

A few questions later, Zimmer let out a sarcastic laugh as he grew increasingly annoyed by reporter questions.

“Well you know when you have injuries you’re going to have backup players play in there,” Zimmer stated, stumbling with his words as he tried to shake the frustration. “That’s not — We’re not going to make an excuse for this game or for players that come in or anything else. We’ll take ownership of what we did Sunday and we’ll move forward.”

The coach was repeatedly asked about the offensive line’s below average performance in yesterday’s game.

Was it a communication factor? Missed assignments? A product of three starters being injured? Reporters requested.

Zimmer took a deep breath, kept his cool, and answered the questions.

When asked later about the status of Riley Reiff’s ankle, he suddenly glowed and it appeared as if a weight had been lifted off his shoulders. Zimmer happily reported that Vikings left tackle’s ankle was feeling “a lot better than he thought it was going to be.”

When asked by a reporter if it was broken, Zimmer chuckled.

“I don’t know,” said Zimmer, who immediately changed from happy to agitated. “I don’t – I mean, a sprain or a strain did you say?”

“Um, I mean, you can call anything a sprain, so, whatever you want to call it,” the coach replied.

“Does he have a shot at playing Sunday would you say?” another reported asked.

“Today is Monday, ok?” Zimmer said sternly, clearly bothered by the reporter’s insistence. “I’m not going to talk about injuries. We’re not going to go there. There’s no sense starting already. I’ll know more Wednesday when they practice.”

Zimmer inhaled stiffly through his nose, peered away from the reporter, exhaled, and took the next question.

When asked later if quarterback Case Keenum was his starter going forward, Zimmer replied with a simple, “Yeah.”

Zimmer refused to answer another reporter when he asked if the coach would play it safe and rest starters along the offensive line so the players could be healthy for the playoffs. Given the Vikings current playoff seed it seemed a fair question.

Zimmer wouldn’t have it.

“Come on, come on. You’re not — You didn’t seriously ask me that did you? [If] guys can play they’re playing. That’s just how it’s going to be,” Zimmer said. “We’re not in the playoffs, and we need to go out and play.”

The coach again boiled over when another reporter later asked him for clarification regarding Keenum being the starter week-to-week or for the rest of the year.

“This Sunday’s game,” the reporter offered.

“I already said that didn’t I?” Zimmer snapped back.

“Right I just wanted to clarify.”

What a difference a week makes.