Vikings Should Refrain from Drafting a Kicker or Punter 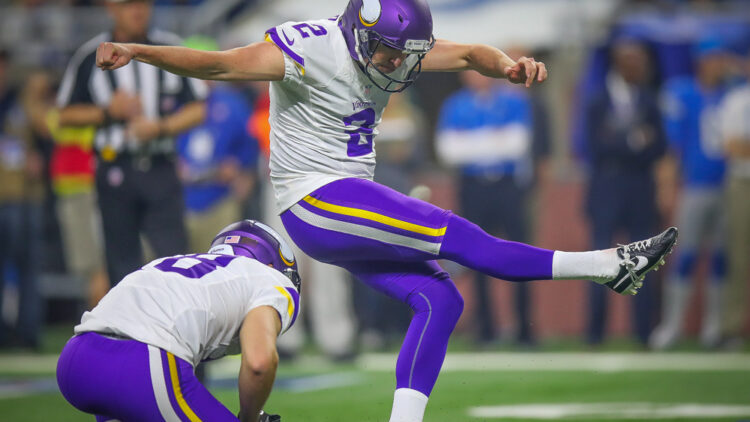 The Minnesota Vikings find themselves in a bit of a special teams quagmire with the NFL draft quickly approaching.

Blair Walsh, a sixth-round pick in 2012, was notably released this past November and subsequently replaced by former undrafted free-agent kicker Kai Forbath. The Jeff Locke roller coaster, which began with the Vikings selecting the former UCLA punter during the fifth round in 2013, came to a decisive end when he bolted for Indianapolis during free agency this offseason. He has since been replaced on Minnesota’s roster by a pair of previously undrafted punters in Texas Tech’s Taylor Symmank and Boston College’s Ryan Quigley.

Forbath, who connected on 15 of 15 field-goal tries and 11 of 14 extra-point attempts after joining Minnesota ahead of Week 11 in 2016, offers — at the very least — a short-term solution to the Vikings’ kicking situation. Symmank and the recently-signed Quigley, on the other hand, are set to battle it out for the punting job vacated by Locke, but — similar to Forbath — do not necessarily represent definitive long-term options.

Point being, Minnesota is potentially (still) in the market for an upgrade at kicker, punter or both — and the Vikings should refrain from investing any of their very limited draft capital on either special teams position during any round of the 2017 NFL draft.

NFL teams have been drafting kickers and punters for over half a century. In 1952, the Los Angeles Rams made Sam Baker the first kicker drafted in NFL history when they selected him during Round 11 (No. 133 overall). Seven years later, the San Francisco 49ers made Bobby Joe Green the first punter ever selected during the NFL draft. Since Baker and Green set the precedent during the 1950s, 221 kickers and 164 punters have been selected to date.

The vast majority of these players were selected during the latter rounds, but 37 kickers and 25 punters have been drafted within the top 100 picks throughout draft history. Charlie Gogolak (No. 6 overall, 1966) and Russell Erxleben (No. 11 overall, 1979) represent the highest selections at kicker and punter, respectively.

As it pertains to Minnesota specifically, the Vikings have selected six kickers and five punters with Walsh (No. 175 overall, 2012) and Locke (No. 155, 2013), respectively, representing highest selections at each position throughout franchise history.

Although many of the 387 combined special-teamer picks selected over the past 50-plus years have worked out swimmingly, recent history suggests teams have the ability to acquire kickers and punters of similar — if not greater — value without spending their coveted draft picks. This premise, boiled down to its simplest point, is a primary example of available options outweighing positional need.

To state that teams need not worry about drafting kickers and punters implies that there is an alternate route of obtaining quality special teams athletes. In the same way the Dallas Cowboys and Houston Texans acquired quarterback Tony Romo and running back Arian Foster, respectively, every NFL team has the ability to sign any prospect not selected during the draft to an undrafted free-agent contract. While being an undrafted free agent does allow players befitting of this title the luxury of having the final say on their new home, savvy general managers are more than capable of adding talent and depth to their respective rosters without paying the troll toll of one pick per prospective NFL athlete.

This, obviously, is a well-known player-acquisition method, but many teams — Vikings included — fail to utilize it to the fullest with regard to reloading on special teams talent. Even the New England Patriots, who are arguably amidst the longest run of success in NFL history, have spent draft picks on two kickers, two pure long snappers and one punter since 2000 despite learning first-hand of the special teams value available in undrafted free agency courtesy of all-time kicking legend Adam Vinatieri back in 1996.

Vinatieri may represent the pinnacle of undrafted special teams glory — which kind of comes with the territory of being an all-time great at any position — but he is certainly not the only kicker (or punter for that matter) to experience a great deal of NFL success despite not receiving a phone call on draft day.

Among kickers ranking in the Top 30 in field goals made in 2016, 70 percent (21 of 30) originally began their professional careers as undrafted free agents. Moreover, two kickers converted at least 30 field goals at over a 90-percent rate in 2016 — Baltimore’s Justin Tucker (38 of 39) and Atlanta’s Matt Bryant (34 of 37) — both of which were, you guessed it, undrafted free-agents signings.

The undrafted free-agent crop includes plenty of outstanding years of NFL service (Vinatieri, Bryant, Phil Dawson, Robbie Gould), arguably the most dominant leg in professional football (Tucker) and actually makes up the vast majority of projected starting kickers in 2017 (23 of 32 – 72%).

Undrafted punters do not dominate rosters like their undrafted kicking counterparts, but they are still heavily represented within today’s NFL. Punting is also less cut-and-dry than kicking, as basic statistics do not offer a very accurate idea of how well a given player performed due to their inability to incorporate situational punting and coaching tendencies.

That said, however, only one punter in NFL history has been referred to as a “weapon” by Bill Belichick, and that is current Los Angeles Ram and 2012 undrafted free agent Johnny Hekker. Long-time Seahawk Jon Ryan and flashy Raiders punter Marquette King also bolster a talented and relatively sizable group of current punters who did not have their names called on draft day.

As a whole, the past 10 years of results argue that both kickers and punters of high quality may be acquired without spending a draft pick. Drafting special teams players can pay dividends, but regardless of how well they play, they still were acquired via a valuable draft pick — some, in the cases of kicker Sebastian Janikowski (1st Round) and punter Bryan Anger (3rd Round), being more pricey than others.

Special teams players are certainly worthy of a draft selection given their situational importance, but the fact of the matter is that quality can be obtained without spending capital. Considering that only 32 kicker and 32 punters can start and each year provides a handful of hungry, capable special-teamers waiting for a crack at professional football, it makes logical sense that quite a few would slip through the cracks to undrafted free agency. In the end, all one needs to ask is this simple question: “Would you rather pay or not pay?”

Considering the high number of valuable assets Spielman has found since he was officially named Minnesota’s general manager in 2012 — Jarius Wright (4th Round), Rhett Ellison (4th Round), Stefon Diggs (5th Round), Michael Mauti (7th Round), Shamar Stephen (7th Round), Jabari Price (7th Round) — the answer to the above question should, very obviously, be “not pay”.

Selecting a kicker or punter should not necessarily be considered a “wasted pick”. That said, however, picks of this nature should be filed under “unnecessary use of resources” due to the high rate of success teams have had digging long-term options at kicker and punter in undrafted free agency.

And, given their lack of a first-round pick, the Vikings are not exactly in a position to throwing away draft selections on special teams upgrades this year.