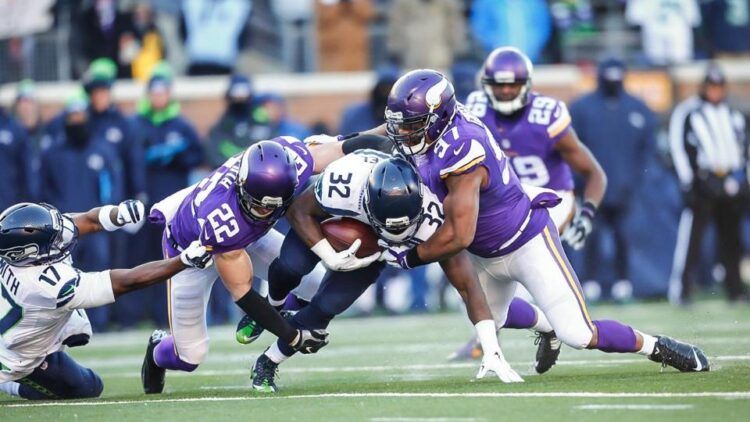 Blair Walsh missed a 27-yard potential game winning field-goal with 22 seconds to play as the Seattle Seahawks escaped Minneapolis with a 10-9 victory. Walsh was having an MVP like day connecting on field goals of 22, 43 and 47-yards helping guide the Vikings to a 9-0 fourth quarter lead.

The momentum swung in the Seahawks favor when a shotgun snap sailed past Russell Wilson and he not only managed to recover it, but in Houdini-like fashion, avoided the sack and found Tyler Lockett on a crossing route for the improbable 35-yard reception. Two plays later, Wilson hit Doug Baldwin for a 3-yard touchdown cutting the score to 9-7.

On the Vikings’ following possession, Adrian Peterson fumbled after making a catch out of the backfield which led to a Seattle seven play drive capped off by a Steven Hauschka 46-yard game winning field goal with 8:09 to play.

The Vikings controlled the game for the first three quarters of play utilizing an old-school hold the ball approach which took full advantage of the below zero game time temperature.

The loss stings because the Vikings did enough on both sides of the ball to win this game. The Vikings got a good performance from Teddy Bridgewater who managed to get rid of the ball quickly while spreading the ball to nine different receivers finishing 17-of-24 for 146 yards. Adrian Peterson got his share of touches running 23 times for 45 yards.