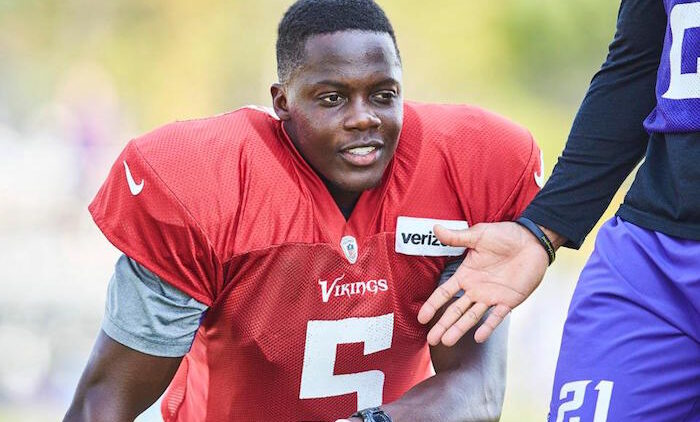 Seems like the Minnesota Vikings just started this year’s training camp in Mankato, Minnesota, yet they are about to begin their sixth day of work already. In a little over a week, the Vikings will head to Cincinnati to play the Bengals in their first preseason game of 2016.

Here at Vikings Territory, we have got you covered for the latest from Mankato. So find somewhere comfortable to sit and enjoy some football this morning.

10:30am – The Vikings have already announced that their walk-thru will start a little later today due to some weather issues and begin around 10:45am.

#VikingsCamp AM practice is moving back a bit to 10:45. Weather still looks pretty iffy in Mankato.

10:35am – A little minor news to talk about this morning before the team hits the field. With Phil Loadholt now retired, new Vikings offensive tackle Andre Smith has switched his number from 72 to 71 (Loadholt’s previous number).

10:45am – Minnesota’s players are now on the field and just about ready to begin their walk-thru this morning. Running back Jerick McKinnon, who sat out yesterday’s walk-thru and practice with an injury, is back on the field in Mankato today.

A delayed morning walkthrough but now the sun is out in Mankato. pic.twitter.com/3Yc0XxKSz8

Jerick McKinnon is participating in the #Vikings morning walk-thru.

10:50am – Things are beginning to be a little more concrete on the offensive line at the right tackle spot while another one of Minnesota’s offensive playmakers in Cordarrelle Patterson is also participating in today’s walk-thru. This is the first time Patterson has been involved in the team’s walk-thru since he injured his shoulder during the team’s very first camp practice.

Andre Smith is at right tackle for the second straight day. Perhaps the daily rotation with TJ Clemmings is over?

Cordarrelle Patterson is back participating at the #Vikings morning walk-thru.

11:00am – Minnesota may be settled on Andre Smith as their starting right tackle, but the battle for the starting center spot is still continuing between John Sullivan and Joe Berger.

Berger’s day to take snaps at first team center. He and Sullivan have been alternating every day. #VikingsCamp

11:05am – A return to the field has put Patterson right back in the wide receiver mix. He still has a lot of ground to make up with the time he missed, but he and the Vikings are lucky that his injury was not too serious.

Patterson, Treadwell out wide with 2s, Wright in slot.

11:10am – A team’s walk-thru is not known for being the most exciting part of camp, but rookie tight end David Morgan is doing his best to keep the camp crowd somewhat entertained this morning.

David Morgan II with a nice one handed catch down the seam. Drawing the first crowd “oooo” of the day. #Vikings

11:15am – If training camp is any indication, expect McKinnon to see a lot more time on the field in long third down situations. His pass catching abilities give him an edge over Adrian Peterson in these instances.

Thielen and Johnson outside, Diggs in the slot. McKinnon in the backfield. Usual starting Nickel D. pic.twitter.com/UmJxbPXI8A

11:25am – Defensive end Danielle Hunter should have some more opportunities this year to chase down opposing quarterbacks. Coming off a rookie season where he was still considered “raw”, a full offseason with the team could help Hunter turn into the Vikings next great pass rusher.

2-minute drill stuff being worked on now. Hunter-Johnson-Robison-Griffen on DL.

11:30am – Today’s walk-thru is just about over as the team is finishing off with some work on special teams. Practice is scheduled to begin around 2:45pm CT today. Eyes will be closely watching Patterson to see how he does if the team decides to let him practice today.

Kick team work to close out the walkthrough this morning.