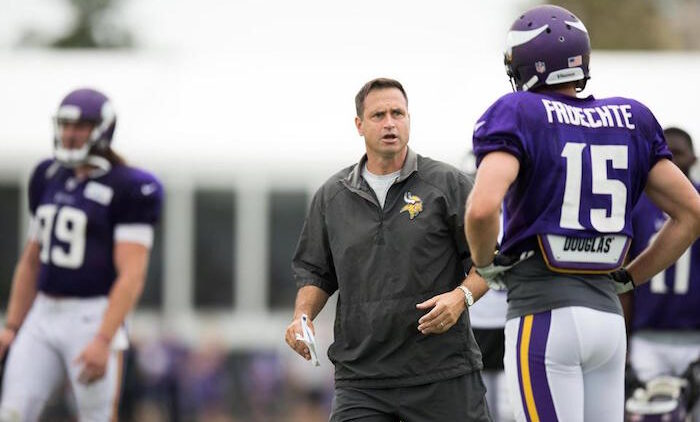 After a day off on from football activities on Tuesday, the Minnesota Vikings return to the field today in Mankato. Will the team finally see running back Adrian Peterson participate in the afternoon practice later today?

As for this morning’s walk-thru, we have got your live updates…

10:25am – Vikings players are beginning to make their way to the field this morning.

10:35am – This morning’s walk-thru has begun and a certain number 28 is participating. Check back here later today to see if Peterson practices for the first time in camp this afternoon. As for Cordarrelle Patterson, it is looking like it will be another day without the wide receiver on the field because of the shoulder injury he suffered on the first day of camp.

AP practicing in walk throughs.. No sign of CPatt yet https://t.co/KsNNqgGX8G

10:40am – No real surprises on Minnesota’s first team offense and defense this morning. The combination of Matt Kalil, Alex Boone, John Sullivan, Brandon Fusco, and Andre Smith is seeming to be what the Vikings will likely open the season with on their offensive line (barring any injuries).

First-team OL line is back to Andre Smith at right tackle and John Sullivan at center. No 1st team defense depth chart changes yet.

10:50am – Running back Jerick McKinnon left practice early on Monday with a head injury. Mike Zimmer later told reporters that he would be fine, but McKinnon has not been participating in this morning’s walk-thru.

McKinnon out here but not participating.. Could be in concussion protocol? However, Zim said he was fine after practice Tuesday..

10:55am – Rookie wide receiver Laquon Treadwell is getting some time on the Vikings first team goal line offense. Combined with Peterson and tight end Kyle Rudolph, Minnesota should have plenty of options this season when in goal line situations.

Laquon Treadwell is a specimen. Looks like Brandon Marshall without the tantrums

11:00am – Sounds like McKinnon’s injury is NOT concussion related, which is good for the running back and the Vikings. Just another minor injury for Minnesota during this camp.

Back in Mankato. Sounds like McKinnon will be fine. Likely just be a couple days with a muscle strain. No reason to worry. #vikings

11:05am – Add fullback Zach Line to the Vikings minor injury list. Minnesota has been quite lucky with their lack of serious injuries in camp so far (currently looking for a piece of wood to knock on).

11:10am – ZIMMER ALERT! Mike Zimmer giving the fans in Mankato a reason to cover their child’s ears this morning. These never get old.

Zimmer giving Edmond Robinson an earful after a missed assignment. Man I missed hearing those f bombs in person. #VikingsCamp

11:15am – Walk-thru coming to a close soon in Mankato as the Vikings are ending this morning with some special teams work. Meanwhile, linebacker Chad Greenway has already decided that his morning walk-thru is over for today.

11:20am – That just about does it for the walk-thru this morning. Join us here on Vikings Territory when the team hits the field for their afternoon practice around 2:45pm later today. Until then…