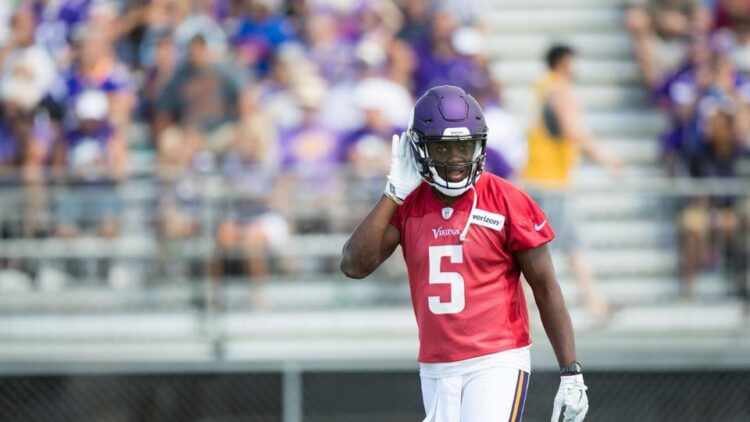 Happy Saturday, Vikings fans. Yes, it’s the weekend… But we know there are some die-hard fans out there who are looking for any and all updates available as the Vikings take the field for their second day of training camp.

I’ll be here the next couple of hours or so aggregating all of the best tidbits of news out of Mankato. So grab a seat and hang out with me here for a while. The yard work can wait and Vikings training camp is more important anyway.

2:49 PM – Obligatory Cordarrelle Patterson update: He’s on the field for the afternoon practice but will not participate. The injury isn’t believed to be severe but no reason to rush him back the day after.

2:52 PM – According to Daniel House of Vikings Corner, Diggs, Sherels and Stoudemire are getting the reps at kick returner while the rest of the return team focuses on blocking assignments. No real surprise here with Patterson sidelined. (On a side note, if you’re not following Daniel House (@vikingscorner) during training camp, you’re missing out. The coverage Daniel provides is stellar. Visit www.mnvikingscorner.com every night for his daily camp notebook.)

2:56 PM – There hasn’t been any clarification on specifically the type of illness that is keeping guard Mike Harris out of practice so far. No timetable has been offered for his return, either. However, the general vibe around the situation right now is one that is not positive. Today, Harris discussed the situation with media. “It’s hard man. It’s just personal, man, illness. As soon as I get the doctor’s clearance, I’ll be back. The trainers and everybody, my coaches, my teammates, have been supportive. It hurts not being out there. It’s just hard to talk about.” According to Chris Tomasson of the Pioneer Press, Harris was diagnosed in June but has seen improvement since then.

Already it seems there are issues popping up around the Vikings offensive line that put into question whether or not the unit will see any improvement. Mike Harris was arguably the Vikings’ best offensive lineman last season. Though he may not have started this year with the addition of Alex Boone and the probable relocation of Brandon Fusco the right guard, depth as a unit is quickly depleting.

3:11 PM – According to Daniel House, the offensive line personnel hasn’t changed since this morning. Kalil – Boone – Berger – Fusco – Clemmings. (Don’t read too much into this, though. Sounds like the team is just getting different looks with various personnel groupings.)

3:14 PM – For the second straight day, Peterson is not a full participant in practice. According to Matt Vensel, he’s to the side working with a trainer.

Adrian Peterson is working with a trainer on a side field during position drills for a second straight day. But again, he says he's OK.

McKinnon running wheel routes out of the back field and it's just so smooth and natural. Such a weapon offensively.

3:23 PM – David Morgan, the Vikings sixth round selection in the 2016 draft, has impressed quite a few people with his great hands so far. If Morgan continues to develop well, he could help alleviate the loss of Rhett Ellison early in the year.

3:29 PM – Andrew Kramer with a more comprehensive look at who’s not participating today due to injuries:

3:32 PM – We’re only two days into training camp… However, the early reviews of backup, veteran quarterback Shaun Hill are not good. Seems to be floating passes all over the field. If Bridgewater ever goes down, this team is going to be in a lot of trouble.

Stefon Diggs heading to the medical tent. Didn't see any injury. Might have been overheated. #Vikings

Diggs is back on the field, just caught a pass from Teddy. Rest easy, Vikings fans.

3:43 PM – Trying not to overreact but our backup quarterback situation seems dire. Hill and Stave apparently overthrowing everyone, every time.

3:44 PM – On the bright side, it sounds like Teddy is having another great practice. My Twitter timeline is full of “Teddy hit ______ in stride” or “Teddy lays out a beautiful deep post for _______.” All positive so far.

3:53 PM – Not really much to share from the past ten minutes or so. I kid you not though, every update I have seen involves a description of Shaun Hill overthrowing Player X.

3:59 PM – Hard for me to say, but I guess even Teddy isn’t perfect. Also, Eric Kendricks is pretty damn good.

Kendricks with a phenomenal diving interception. Stepped in front of a Bridgewater pass intended for Rudolph. Impressive play.

4:01 PM – According to Arif Hasan, Zimmer went on an animated, expletive-laden coaching session on the importance of discipline. <3

4:05 PM – From what I’ve been able to gather, it sounds like the receivers are really taking it the cornerbacks. While it’s good to see them doing well, I wouldn’t read into it as an indication of poor defensive play. It’s difficult to keep your guy from catching the ball when you can’t be physical with him.

Teddy … hit? as he threw. Still his Charles Johnson in stride to the sideline. Nice catch, toes inbounds. Beat Waynes.

The defense and offense are both walking through formations/alignments now. Probably one more team drill on the horizon.

Böhringer and Treadwell running with the 2's. Laquon gets open on Waynes with a comeback.

Seems like another poor day for the defense so far. Teddy and now Hill with several consecutive completions

4:38 PM – Likely the play of the day. Teddy bounces around in the pocket to avoid pressure and floats a nice one to Jarius Wright deep. Touchdown!

4:42 PM – Teddy has another nice ball to Wright deep. Wright has to fully extend to reach it but the ball goes through his hands. Incomplete.

Anthony Harris is now getting safety reps with the second-team defense. Paired up with Michael Griffin. #Vikings

4:48 PM – Have seen a lot of “Great completion to Player X but Quarterback Y would have been sacked.” Just a reminder that the success of the offense, while nice, should be taken with a grain of salt. Defense isn’t allowed to actually play defense.

How fast is Jet? You tell me… pic.twitter.com/hDURnhZGpN

Final drill of the day pic.twitter.com/aE3MWTTaiB

5:01 PM – Thanks if you chose to spend your Saturday afternoon here with me at Vikings Territory and geeking out over Vikings football. Check back tomorrow for more coverage of  Vikings Training Camp 2016.