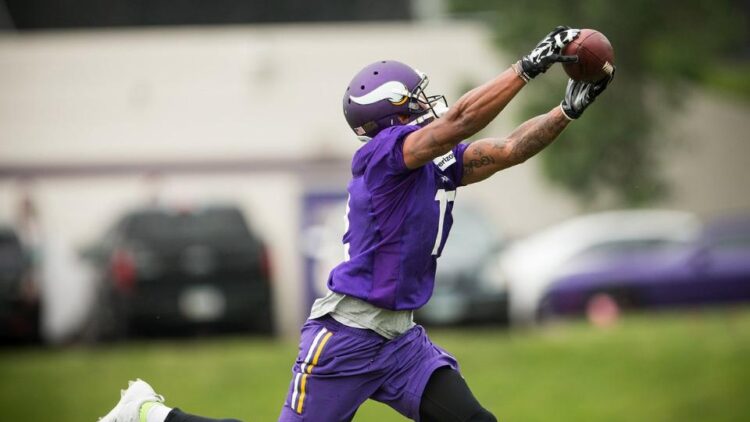 Following a productive, refocused offseason, Cordarrelle Patterson was supposed to be the “next man up” for the Vikings. A threat on every kickoff return, Patterson’s yet to prove he can find that same success as a wide receiver in Minnesota. He had his chance to do just that on the first day of training camp, only to watch his progress come to a screeching halt.

Patterson hauled in a spectacular 45-yard bomb from Teddy Bridgewater during the team’s first set of 11-on-11 drills, showing off the speed and athletic ability that made him such a high draft pick. But the elation was short-lived, as Patterson crumpled to the ground in pain, screaming for all in the stands to hear. His day — and the optimism that preceded it — was suddenly cut short.

The unfortunate ailment, speculated by Matt Vensel to be a left collarbone/shoulder injury — opens opportunities for other receivers on the roster. Patterson had been rotating in with the first team, but now finds himself (at least for now) on the outside looking in. His predicament highlights the brutal reality of the NFL; that injuries, no matter how severe, can derail the hopes of some and elevate those of others.

Hence, Charles Johnson put on quite the show at training camp this afternoon. Nearly forgotten after breaking multiple ribs in the middle of 2015, Johnson caught the attention of multiple writers, bloggers, and fans in Mankato today. He burned Xavier Rhodes on a route down the field, caught multiple balls in traffic and enjoyed most of the offense’s first-team reps. With his injury behind him, Johnson is fighting to regain the form he found in 2014, when he elevated himself from practice squad player to Bridgewater’s favorite target.

First round draft pick Laquon Treadwell did his best to steal the spotlight, too. He kicked off his first NFL training camp with a bang, matching Johnson catch-for-catch down the field. His first reception came on a long throw from Bridgewater, and he showed off his exceptional route-running throughout the day. The battle to be Minnesota’s No. 1 receiver will come down to Treadwell and Johnson, and it’s a fight that will likely last through the preseason.

Stefon Diggs was his usual self during team and individual drills, making it clear that he’s one of the Vikings’ most valuable receivers. And behind him, Adam Thielen remains a solid contributor on both special teams and in Minnesota’s offense. All who lined up for the Vikings today left an impression on those in attendance and made their case for a spot on the final 53-man roster.

It’s disappointing that Patterson, as talented as he is, saw his chance for redemption cut short by a freak injury. While other receivers enjoyed the benefits of increased snaps and more time on the field, Patterson sat on a trainer’s table far away from his Vikings teammates. If rumors are true, Patterson may return to the field well before training camp ends. Until then, opportunity awaits those ahead of Patterson on the depth chart.