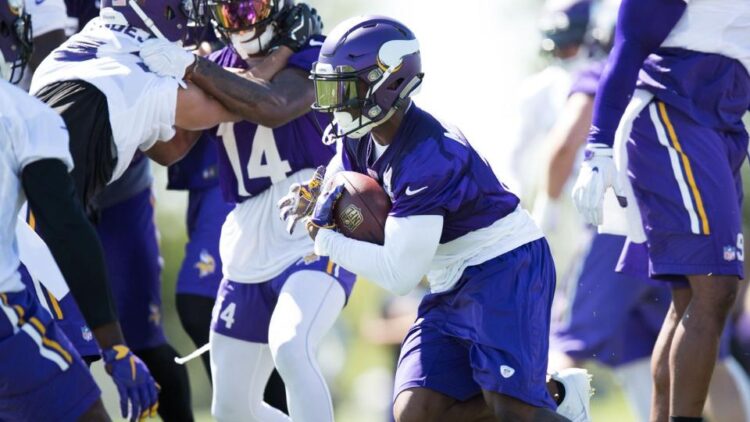 Jerick “Jet” McKinnon is enjoying the open skies in Mankato, taking most of the Minnesota Vikings’ first-team reps through two training camp practices. He’s filling in for Adrian Peterson, who arrived Monday nursing a pulled hamstring. According to head coach Mike Zimmer, the Vikings are “being careful” with their star running back, holding him out of 11-on-11 drills and any physical contact.

With the fleet’s most reliable plane grounded, the runway is clear for “Jet” to take flight. All reports indicate McKinnon is soaring; he looks faster than most defenders and perfectly capable as a receiver. Thrown into the spotlight this offseason, McKinnon is proving he can do it all for the Vikings.

It won’t be long before Peterson can “cut it loose” at practice, but McKinnon’s pseudo-tryout is raising eyebrows — and questions — in Mankato; more specifically, questions about McKinnon’s role in what’s sure to be a more balanced attack in 2016.

Offensive coordinator Norv Turner addressed the speculation after the team’s walkthrough this morning . “I know there’s a lot of talk about where we were ranked in pass offense and a lot of different things and how we were one-dimensional,” he said.

The Vikings finished the year as the league’s 29th-ranked passing offense, with Teddy Bridgewater’s first 300-yard game not coming until Week 14 of the regular season. To compensate for a shaky offensive line, Turner relied heavily on Peterson. The 31-year-old running back relished the increased workload and led the league in attempts, rushing yards, and rushing touchdowns in 2015.

But late in the year, Turner found ways to get McKinnon more involved. He toyed with personnel groupings that saw McKinnon and Peterson on the field at the same time. He designed specific plays for McKinnon including jet sweeps, short crosses, and quick-hitting runs up the middle. He lifted the “landing gear” on his own personal “Jet” and took Minnesota’s offense to new, creative heights.

It’s a strategy Turner admitted could make a return in 2016 as the Vikings aim for more consistency. “Some games maybe that means Jerick gets more carries. Some games that means Jerick gets the ball thrown to him. Maybe some games we have Jerick and Adrian in the backfield together,” he told reporters. “It’s about putting a plan together that helps you win and certainly enough has been talked about in the passing game.”

McKinnon is the type of player who can help the Vikings win, whether on the ground or through the air. His training camp highlights are enough to convince those watching that McKinnon is deserving of more playing time. Take the play below, where McKinnon embarrasses Emmanuel Lamur, a converted safety, with his raw speed and athletic ability; many players on Minnesota’s roster couldn’t make such a feat look so easy.

How fast is Jet? You tell me… pic.twitter.com/hDURnhZGpN

In an interview with Vikings Update, McKinnon called this rare opportunity “valuable,” acknowledging that he’s getting more comfortable as he transitions from OTAs to the intense days of training camp. “I’m not second guessing myself anymore,” he said, when asked how this year is different than his rookie season, a year where he averaged 4.8 yards per rush. “I think it’s showing, and I think the coaches are definitely taking notice.”

While he hopes to build on his success from late last season, McKinnon also understands that this is Peterson’s role to lose. “I don’t know what will happen,” he said. “I would love the chance to be featured more, but that’s up for the coaches to decide. I’m only focused on being the best that I can for the 2016 Vikings.”

Whatever role he plays, McKinnon’s soaring for the Vikings, and fans are eager to buy a ticket for the ride this season.