Blair Walsh: “I’ve Come Through For This Team Before And I Will In The Future” 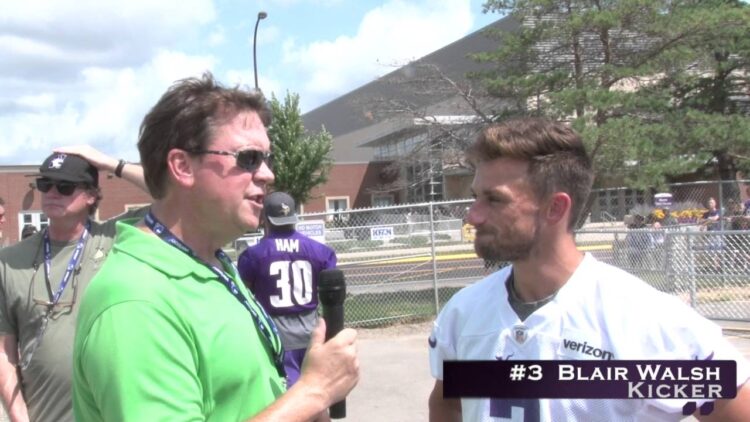 Another year at training camp means another great series of interview by Tom Moore of VikeFans fame. Tom was just dusting off his best set of conversational chops this morning when he was able to snag Vikings kicker Blair Walsh for a few words.

The video is above and you can listen to all of the fun for yourself, but it is certainly worth noting that Walsh seems as confident as ever and says as much. Having proven to be an honest individual, even when the cameras are on, Walsh sounds determined to rebound from his playoff miss in a way that leaves Vikings fans forgetting about what could have been in 2015.

“I think the people of Minnesota have recognized that I’m one of the best kickers in the league,” Walsh told Moore on Wednesday. “That’s how I feel and that’s what the stats show, so I’m out here, you know, exuding confidence I have in myself and in my abilities. And they know I’ve come through for this team before and I will in the future.”

Walsh has indeed received plenty of support ever since the infamous 27 yard miss at TCF Bank Stadium. One guy that showed support to Walsh, however, is uniquely qualified to lend an ear and words of advice for this specific situation.

That person is none other than Gary Anderson.

“We talked (in May),” Walsh told the Pioneer Press. “Gary was so successful in the league for so long. He just kind of had some good advice on how to handle everything. It means a lot that somebody as qualified, and as one of the league’s all-time greats, would reach out to me, and it was nice. … Gary, he’s all class.”

Anderson told Walsh to be himself and reassured him of his abilities as an NFL kicker. Anderson’s story is also an inspiration to Walsh, as he played six more seasons (well into his forties) after missing the NFC Championship kick that has largely been blamed for a Super Bowl-less 1998 Vikings team.

“It shows it can be done,” said Walsh. “He’s one of the league’s all-time greats, and I can’t stress that enough. If Gary can bounce back from it, I can bounce back from it. It takes a certain person to have that mentality, but I think the thing that Gary and I share is that going into those two kicks, both him and I had really good careers here so far. So I think it will be nice to be able to rely back on the career I’ve had here and the career I’ll continue to have.”

Walsh is entering his fifth NFL season and the second year of his second contract. He is scheduled to be a Viking at least until 2019 and will earn a base salary of $1.15 million this season.