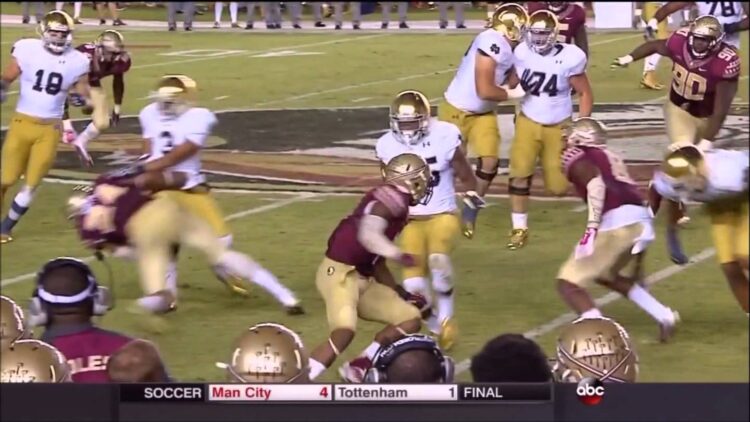 [vc_row][vc_column][vc_column_text]Terrance Smith was a three year starter for the Florida State Seminoles where he played middle linebacker in 2013 and then moved to outside linebacker for his final two seasons. An ankle injury in 2015 slowed his red-shirt senior season causing him to miss four games and finish fourth on the team with 66 total tackles. Smith’s 219 career tackles, 3 interceptions, 12 TFL, and outstanding leadership is flying under the radar making Smith one of this year’s most underrated draft prospects.

Can shed blocks and stack at the point of attack.

Excellent acceleration and can explode through holes to make tackles at the line of scrimmage.

Smart player with good instinct who can read and react well.

Effective when used on blitz packages.

Experience playing middle and on the outside.

Durability concerns. Missed time from injuries during his freshman and senior seasons.

Will need to add weight and strength.

Undersized to play the middle in a 4-3.

His narrow frame and lack of strength might limit his effectiveness as a tackler in the NFL.

Telvin was drafted in the fifth round of the 2014 NFL draft. He is also a tall, rangy linebacker from Florida State who has made an early impact in the NFL with 232 tackles in his first two seasons.

Anthony Barr and Eric Kendrick will once again command most of the snaps at the linebacker positions for the Vikings in 2016. With good depth behind them in Audie Cole, Edmond Robinson, Brandon Watts plus newly added free agents Emmanuel Lamur and Travis Lewis, the linebacker position doesn’t appear to be a high priority this draft season. However, a late round linebacker who could steal a final roster spot from Watts or Lewis who also has the upside to project as a future starter, just might be on the Vikings radar.

A naturally smooth athlete like Smith who has good size and production from a major program such as Florida State usually doesn’t escape the national draft hype the way Smith has. His range, acceleration, agility and length make him an exciting prospect who could turn out to be one of the steals of the draft.[/vc_column_text]