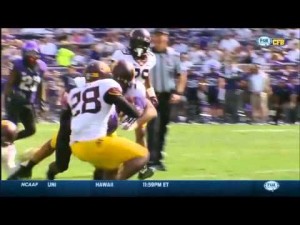 A transfer from Hutchinson Community College to Minnesota in 2013, De’Vondre Campbell has progressed nicely over the past two seasons and now has his sights set on a future in the NFL. He finished on a high note posting 13 tackles against the Wisconsin Badgers to close out his redshirt senior season with 89 tackles, two sacks, one interception, and one forced fumble. Some of his best games came against tougher competition, including 13 tackles against Michigan, seven tackles against TCU, and nine tackles and a sack against Ohio State.

Passes the eye test with NFL caliber size and athleticism.

Experience at outside and middle linebacker.

Long strider with great chase speed to cover a lot of ground and close quickly on the ball.

Good upfield burst and can be effective when blitzing.

Best football is still ahead of him.

Tends to over run his angles.

Needs to improve as a finisher in run support.

Not yet the sum of all his parts.

Nigel Bradham, Buffalo Bills
Nigel had a strong senior season in college and entered the NFL draft process much like Campbell as an athletic rangy linebacker with length and the ability to close and play down hill. Fortunately for Nigel, his average instincts and other inconsistencies were viewed as coachable and correctable. Nigel was drafted 105 overall in the fourth round of the 2012 NFL Draft by the Bills. In 2014, he had a breakout season with 104 tackles and 2.5 sacks.

Campbell is just scratching the surface of his potential. Mike Zimmer knows what to do with a diamond in the rough and Campbell will more than likely be drafted ahead of players with better instinct and technique. Scouts will admit it’s not all about what a player can’t do right now, but rather what they can athletically and physically accomplish in the future. Campbell has the raw talent, physically tools and work ethic to develop into a NFL starter as a weak side linebacker in a 4-3 scheme.

Outside linebacker is certainly not a glaring need for the Vikings, but adding depth and finding a future replacement for Chad Greenway will probably be on Zimmer’s radar at some point this offseason. A late rounder like Campbell who has upside and can compete with Edmond Robinson and Brandon Watts is a small investment that could pay future dividends. Zimmer’s success coaching up raw talent makes me believe a project like Campbell might be an intriguing option for the Vikings. Campbell has shown steady improvement from practice to practice and from one year to the next for the Golden Gophers.