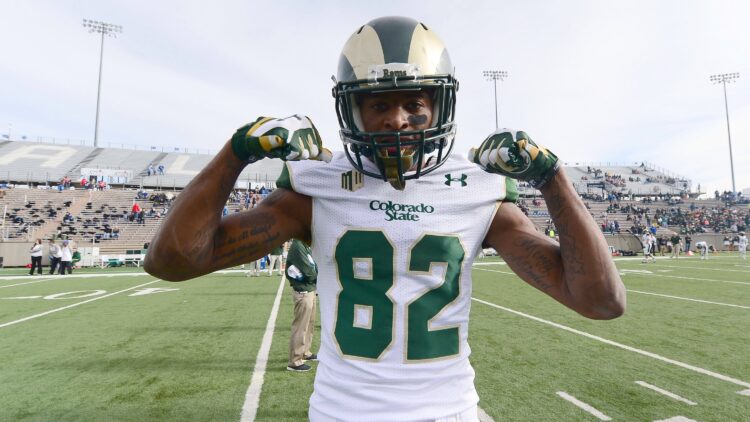 [vc_row][vc_column][vc_column_text][This Rashard Higgins Scouting Report, with a Vikings slant, has been provided to Vikings Territory by Draft Season. Be sure to check back for more and also be sure to visit Draft Season to quench your NFL Draft thirst. All previously published scouting reports can be found by clicking here.]

Good route runner.  Higgins is in and out of his breaks quickly and makes precise cuts.

Natural ball carrier.  Higgins is very comfortable with the ball in his hands and has a plethora of moves to make defenders miss.

Willing blocker. “Hollywood” isn’t the strongest receiver out there, but he stays on his man and battles until the whistle.

Needs to bulk up. Higgins is 6’2” but only 181 lbs. He could stand to add about 10 lbs. of muscle to out power some of the physical corners he’ll see in the NFL.

Bit of a body catcher. Higgins doesn’t often go up and snag the ball with his hands. He often tends to secure it with the help of his chest.

Will suffer the occasional drop. Hollywood sometimes loses focus, dropping a ball that should have been caught.

His “Hollywood” moniker will scare some teams off. Not all teams want a flashy player who draws attention to himself and not the team. His dancing in the end zone won’t help this cause either.[/vc_column_text][/vc_column][/vc_row][vc_row][vc_column][vc_column_text css=”.vc_custom_1456844062999{padding-top: 15px !important;background-color: #dbdbdb !important;}”]

The Vikings are definitely in the market for a wide receiver. The only ones currently on the roster that they can count on in 2016 are Stefon Diggs, Jarius Wright, and Adam Thielen. Cordarrelle Patterson and Charles Johnson are both question marks, and Mike Wallace is likely to be released in the offseason.  The Vikings have said publicly that they want Teddy Bridgewater to air it out more in 2016. For him to be successful at that, they’ll need to upgrade the talent at wide receiver. Higgins would give Teddy a target with a little more size. His willingness to work the middle of the field would be another added benefit. Higgins is a good run blocker, something that may make him very attractive to the Vikings and their run first mentality. These factors make Higgins a receiver that would likely be on the Vikings radar. If they choose address their offensive line in round 1 and then a safety in round 2, assuming he is still available, Higgins would definitely be a receiver they could target in round 3.[/vc_column_text][vc_column_text]