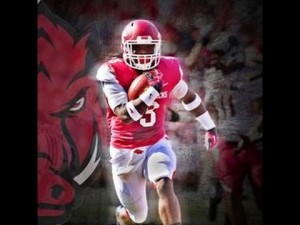 [This Alex Collins scouting report is the first of many, each with a Vikings slant, provided to Vikings Territory by Draft Season. Be sure to check back for more and also be sure to visit Draft Season to quench your NFL Draft thirst.]

Powerful runner. Collins can get loose on the outside with his speed, but he isn’t afraid to rush up the middle and pound his way for some tough yardage.

Compactly built. Collins is a well put-together at 5’11, 215 lbs allowing him to take a hit and drive a pile.

Fast for a back his size. Goes from zero to full-speed in a hurry. Collins’ great acceleration makes him a true threat to score anytime he touches the football.

Adds value as a kick returner.

Hard to bring down. Collins rarely goes down on first contact. He keeps his powerful legs moving, constantly fighting for more yardage.

Shows good patience as a runner. Follows his blocks well and waits for a hole to open up before blasting through it.

Limited production as a receiver. Collins only has 27 receptions and no receiving touchdowns in three years with the Razorbacks. Someone with his explosiveness should likely make more plays in the passing game.

Work in pass protection. Collins is a willing blocker but like many first year backs entering the league, will need to get better in this area. He needs to sustain his blocks, and not just nail a guy once, thinking he will go down and stay down.

Worked as part of a committee. Collins was never the “Man” in Arkansas as he split time with another very good back Jonathan Williams. Remains to be seen how he handles a full workload.

Steven Jackson, New England Patriots
Despite the obvious dreadlocks resemblance, Alex Collins style is very similar to the Steven Jackson of yesteryear. They are both tough, physical runners with good top-end speed. Although Jackson was a better receiver coming out of college, it is something Collins has shown he can do when given the opportunity.

While running back clearly isn’t a top need for the Vikings this offseason, if Alex Collins is still on the board late in the second round (and especially in the third round), they should think long and hard about selecting him. Though Adrian Peterson will likely be back with the Vikings in 2016, seasons beyond the next are an uncertainty.

The Vikings could take Collins and use him as ta third back behind Peterson and McKinnon. They could also start him out as a kick returner and release or trade Cordarrelle Patterson, who isn’t on great terms with the coaching staff and has shown little willingness to get better as a receiver.

Collins would have a chance to be a week one starter in 2017 or, worst case scenario, share the workload with Jerick McKinnon.

Whether or not Alex Collins ends up in purple, he looks to have a very bright future as an NFL back.