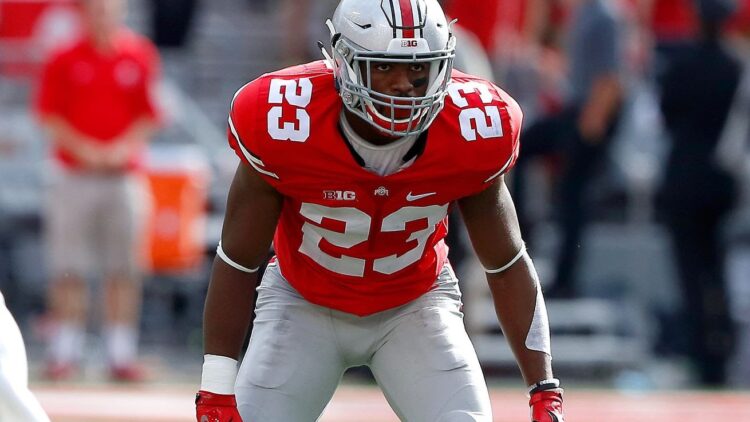 [vc_row][vc_column][vc_column_text]As a three-year starter in the Buckeyes’ secondary, Tyvis Powell was often the forgotten man on a defense loaded with talent. Powell has the size and athleticism teams covet at the safety position, plus the knack for making timely big plays. He led the team with three interception in 2015 and finished third in tackles with 71. Powell’s leadership and energy played a key part in a secondary that was ranked sixth in the FBS in pass efficiency defense and second in fewest points allowed (15.1).

A long, rangy safety who has a great blend of size, speed and athleticism.

Brings a positive energy to the defensive side of the ball with a tempo-setting fun-natured style of leadership.

Good man to man coverage skills. The Buckeyes ask a lot from their athletic linebackers and safeties often lining them up against a team’s slot receiver.

Excels playing deep but is aggressive and active in run support.

A hard worker who expects a lot from himself.

Has a knack for making big plays in big games.

He will need to improve his pursuit angles in the NFL.

Slow to hit the accelerator when reading plays. Has the tools to excel as a downhill attacker but doesn’t flash it enough on the field.

Despite his size, he is not regarded as a physical striker and he will need to work on technique issues to become a more powerful tackler.

A versatile safety who has the size, athleticism and intelligence to be effective regardless of how he is used.

Rick Spielman doesn’t like to overpay in free agency and tends to favor building through the draft. The re-signing of safety Andrew Sendejo on Saturday means the Vikings will most likely not be pursuing a “top” free agent safety and could mean they will look to add talent and competition through the draft. The length and value of the contract might even suggest that the Vikings have enough of a security blanket with Sendejo to now look deeper into the draft, and not rush throwing a rookie into the fire too quickly.

Tyvis Powell’s 32 3/4 inch arms, 4.46 forty time and 34 1/2 vertical caught the attention of NFL personnel at the combine. He is an ideal prospect with starting potential, size and athleticism that Mike Zimmer could take his time coaching up.

Powell made his mark as a redshirt freshman in 2013 filing in as a safety and nickel back contributing on more than 900 plays, but only taking one of those plays to make him an instant hero in Columbus. Powell’s interception with 32 seconds to play on a Michigan two point conversion attempt helped seal a 42-41 victory in one of the nation’s most storied rivalry games. Powell went on to started 15 games in 2014 building on his big game playmaker status by being named defensive MVP of the National Championship game against No.2 Oregon. He also intercepted a pass in the end zone to clinch a 42-35 victory over Alabama in the CFP semifinal game. On January 1, 2016, Powell’s third quarter interception in the Fiesta Bowl helped Ohio State top Notre Dame 44-28.

Adding a safety next to Harrison Smith that can flash big play potential should still be an offseason priority regardless of Sendejo’s new deal.[/vc_column_text][vc_column_text]