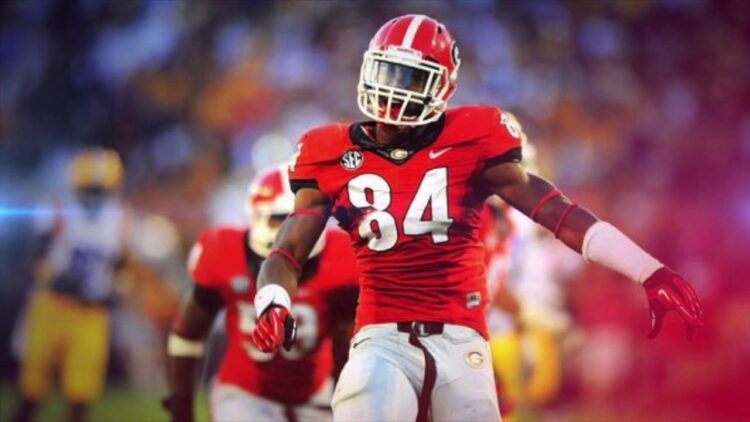 Disclaimer: Buyer beware. Leonard Floyd is a raw but productive edge rusher who may not appear to be a perfect fit for the Vikings, but with Mike Zimmer at the helm anything is possible.

Floyd is a Butkus Award Finalist ranked second on the team in tackles with 74. He is a coaches Second Team All-SEC selection and a Sports Illustrated Honorable Mention All-American. Over the last three seasons, Floyd has become one of the most feared pass rushers in the SEC racking up 17 sacks, 26.5 TFL, and five forced fumbles.

Floyd displays plenty of speed and athleticism to go with an explosive first step as a pass rusher.

He has great change of direction and acceleration with fluid movements even when dropping into coverage.

Great length and will use his long arms to fight off blocks and bring down ball carriers.

Plenty of bend and flexibility to get underneath blocks and around the edge.

Deceptively strong for a lanky build and has some success driving tackles backwards when he uses good technique and leverage.

Floyd has the ability to make himself small and sneak through inside gaps to apply pressure with little wasted motion.

A relentless motor with sideline to sideline range who can routinely chase down ball carriers.

He relies too much on his natural ability and needs to develop and use more technique especially shedding blocks and tackling with added power.

A lean and lanky build that lacks the necessary bulk and size to take on NFL tackles.

No experience as a 4-3 outside linebacker, but Georgia lined him up off-the-ball more often last season even using him as an inside linebacker and dropping him into pass coverage.

Like Mingo, Floyd is a supremely athletic pass rusher with tons of upside who flashes a lot but hasn’t put it all together. Mingo’s seven sacks in his three-year career hasn’t exactly lit the NFL on fire. Unfortunately, the dreaded boom or bust label could also apply to Floyd.

The heir apparent to Chad Greenway may not be on the roster, and Zimmer certainly has the green light to select another project player, but with all the enigmas on the offensive side of the ball, Zimmer may need to wait until the later rounds to find his next defensive ball of clay.

Non-the-less, Floyd is super fun to watch and is garnering a lot of first round attention as dynamic edge rushers often do. Zimmer has had success shaping one-dimensional and raw athletic prospects, and Floyd has the upside and desire to be molded into something special at the next level. Zimmer likes to blitz from the A gab and Floyd excels at bring pressure inside as well as off the edge.

The bottom line is Floyd has a similar body type and skill set as Eli Harold who fell to the 79th pick last year. Floyd is getting more first-round hype, but the Vikings will most likely pass on him with the 23rd pick. If he is still on the board in the late second round, then it might be a little more difficult for Zimmer to pass on this raw talent.