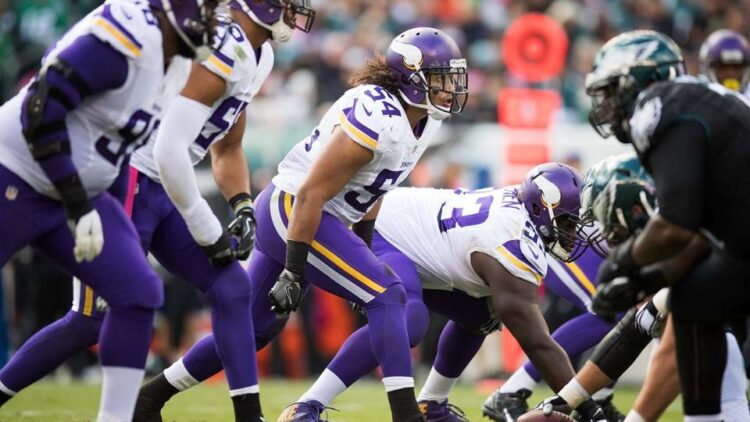 Three years in, and Mike Zimmer’s finally at the head of the NFL’s most dominant defense. It took some time and a few bumps along the road, but the Minnesota Vikings have a chance to go down as a historically great unit.

Outside of the loyal fan base, analysts and professional “football watchers” are taking notice, too; Matt Bowen  of ESPN Insider had this to say about the new Purple People Eaters:

[quote_box_center]”This unit under [Head Coach] Mike Zimmer continues to create panic and turnovers. Through six games, the Vikings are holding opposing quarterbacks to a ridiculously low Total QBR (25.6), and Minnesota is tied with Seattle at the top of the NFL for points allowed per game (14.0). They have a dynamic mix of extremely smart coaching and versatile talent at all three levels of the field. That’s tough to plan against.”[/quote_box_center]

Despite these strengths, the Vikings find themselves in a bit of a rut. In the team’s last three games, they’ve gone without a sack twice. Much of that starts with Minnesota’s opponents; offensive coordinators know the Vikings can generate pressure, and in turn adjust game plans accordingly. Quarterbacks are getting the football out quickly, receivers aren’t attacking the deep area of the field, and in general, offenses aren’t moving the football against the Vikings.

It’s a positive in that pressure, even without production, is fundamentally changing the way offenses try to attack Zimmer’s defense.

But sacks can help flip field position, create turnovers, and allow more flexibility on the back end. There’s nothing suggesting the Vikings won’t get back on track, but it is frustrating to see such a talented defense fail to take the quarterback down.

I may be frustrated, but that’s just one man’s opinion. How does the rest of the Vikings Territory team feel about the suddenly-sackless Vikings?

Everyone’s talking about the offensive line, but Mike Zimmer’s defense was held without a sack on Sunday. Are you concerned?

I am not concerned about the pass rush not getting home against the Eagles. They were facing an athletic quarterback that needed to be contained, and they did a fine job of keeping Wentz largely under wraps in both the run game and in the passing attack. This defense will almost certainly be facing teams that have prepared for getting rid of the ball quick, because the pass rush is so dominant, and those opposing offenses will largely sacrifice their downfield passing game as a result. Taking away that dimension of an opponent’s offense is a victory in itself and the lack of a pass rush is not something I saw as a top reason for Sunday’s loss. If you take the special teams score off the scoreboard, we are all talking about how the defense did their job well in Philadelphia.

Taking away that dimension of an opponent’s offense is a victory in itself and the lack of a pass rush is not something I saw as a top reason for Sunday’s loss. If you take the special teams score off the scoreboard, we are all talking about how the defense did their job well in Philadelphia.

Carson Wentz didn’t beat the Vikings by standing in the pocket and pushing the ball down the field. Philly used shotgun play action quick timing routes to offset and avoid a strong Vikings’ pass rush. I’ll take a no-sack performance any day of the week when the defense can force two interceptions and hold a quarterback to 138 yards passing with a dismal 4.9 yards per attempt. Wentz’s 52.4 quarterback rating against the Vikings was his lowest of the season. His 57% completion rate was also among his worst outings of the year.

Yeah, I would’ve liked them to get more pressure on the quarterback, and I don’t think their lack of sacks was solely due to Philadelphia’s game plan…but they’ll be fine. This defense is talented and well-coached, and they’ll find a way to hit the quarterback more. Defensively, the Vikings put together an effort good enough to win the game and put Carson Wentz on the worst game of his young career. If the lack of quarterback pressure becomes a trend, then it’s a story, but for now, I’m not concerned.

Zimmer has commented many times that his defense is not intended for those who seek top line personal stats. The defense is built around discipline within specific responsibilities. Knowing this, I will sacrifice a couple of sacks for Everson Griffen for a sound defensive system that creates pressure and forced decisions – which will, in turn, create turnovers. Quarterbacks and teams will adjust to an aggressive front seven and if they are forced to make quick decisions and short passes, I’m okay with that.

Not really too concerned about the Vikings defense in the least bit. They are still generating tons of pressure and preventing opposing quarterbacks from really doing anything. Only Mariota threw for more multiple touchdowns on them this season. For now, there are zero worries in my neck of the woods.