Bold Vikings Predictions for the 2016 Season 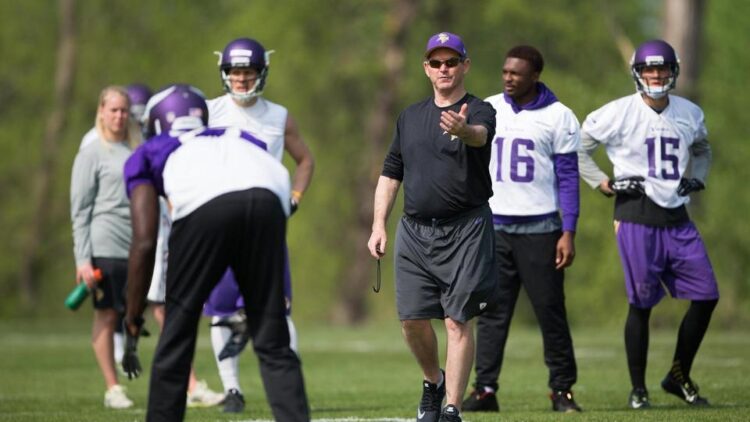 With the news cycle at an offseason low, it’s time to start thinking big. The Minnesota Vikings begin organized team activities (OTAs) next week, marking the high-point in what’s been a frustratingly quiet period since the conclusion of the 2016 NFL Draft.

We’re tired of waiting for the action to begin, though; pull out the crystal balls and put on your thinking caps. The Vikings Territory team — and a special guest — are sharing their bold predictions for the 2016 season. Will Rick Spielman make a surprising trade? Does Moritz Böhringer crack the starting lineup? Read after the jump and see what we think!

What’s your way-too-early bold prediction for the 2016 season?

Trae Waynes was largely unable to get onto the field last season, but I’m not convinced that it wasn’t by design. An old school coach like Zimmer remembers the days when it was widely accepted that corners took years, not weeks, to develop into NFL material. Also, the Vikings stayed unusually healthy at the position. My bold prediction is simple: 2016 is when we find out that Waynes is every bit as good as his draft position suggested he was. And I’m excited to see it happen!

You wanted bold? Here you go. The Vikings will be a participant in the 2016 NFC Championship game.

I’m not quite ready to say “Super Bowl, homeboy” but I’m pretty dang close. I believe too much in this team right now to think they will regress from where they were last year. The Vikings had another great offseason where they added some of the best talent available at positions of need.

Furthermore, I think the defense will continue to progress, becoming a top-5 unit in the NFL and things will finally start to click on offense. The pieces are in place and the Vikings are certainly trending in the right direction. I fully agree with Adrian Peterson that Minnesota’s Super Bowl window is now open.

I’m kind of hitching my wagon to Hunter in 2016, but it’s hard for me to see him not being a major player on the defense. With numerous players capable of getting to the quarterback spread all along the front seven, Hunter will likely avoid chips and double teams off the edge. We’ve seen the talent, and a second year in Zimmer’s system should see him take a step forward. I expect Hunter to vault into the double-digit sack club with 10 sacks in 2016.

Carl: Vikings Earn an A+ in Chemistry

The Vikings currently have 18-to-1 odds of winning the Super Bowl this February. Adrian Peterson is a little more optimistic saying his team has a good chance to win it all this season. However, after last year’s heartbreaking loss to the Seattle Seahawks in their playoff opener, I’m still a little hesitant to predict the Vikings will be hoisting up the Lombardi Trophy this season.

Don’t get me wrong, I think the Vikings’ roster has Super Bowl talent, and with the coaching staff Mike Zimmer has compiled on the offensive side of the ball, it could mean a new dynamic in 2016. But, the key element holding this team from greatness is chemistry. The Vikings won the NFC North with good defensive and a great deal of fight and toughness. That combination can do some special things, but the Vikings’ ability to play on the same page more consistently is what will make this team a real championship contender in the future.

Treadwell just seems too talented not to win the award in 2016. With the circumstances the way they are lined up for the Vikings next season, everything seems set for Treadwell to immediately step in and become the team’s number one wide receiver.

The young player will struggle in the early part of 2016. But, once Minnesota is able to find out what plays turn on his beast mode, the award becomes Treadwell’s for the taking.

The Vikings exposure to a national audience will be the key to Treadwell winning the award. Minnesota plays in numerous primetime games next season and it will only help the country’s football fans notice who one of the best young receivers in the league will be in 2016.

Treadwell and Böhringer carry the flashy names, but don’t forget about Stefon Diggs. The second-year wide receiver burst onto the field last season, catching 52 passes for 720 yards and 4 touchdowns. He outperformed then-No. 1 receiver Mike Wallace, all while playing in just 13 games.

Aside from being a talented receiver, Diggs will benefit from the presence of Treadwell on the other side of the field. Much like Detroit’s Golden Tate and Calvin Johnson in 2014, Diggs and Treadwell have a chance to combine for nearly 200 catches this upcoming season. No, Teddy Bridgewater won’t throw the football 37 times a game — thanks a lot, Adrian Peterson — but he will have more opportunities behind a revamped offensive line and with some new weapons in the passing attack.

My prediction? Diggs catches more balls than Treadwell in 2016. That’s not to say both players won’t be successful — they will, and Treadwell can be special in Norv Turner’s offense. It’s simply that Diggs will see targets everywhere on the field, and he’ll benefit from the double coverage Treadwell receives in the red zone and in certain passing situations. Like Tate for Stafford in Detroit, Diggs will become Bridgewater’s go-to target and safety net on third downs, at least early on in Treadwell’s career.

(Disclaimer: I love Treadwell and think he thrives in Minnesota)

I’m going to bring special guests “on” each week, and today, we have Ryan Boser! You can — and SHOULD — follow Ryan on Twitter at @Ryan_Boser for all things Vikings, Minnesota Sports, Fantasy Football, and Seattle (don’t worry, not the Seahawks).

Second-year safety Anthony Harris will lead the team in interceptions.

In limited game reps, Harris has looked much better than 2014 6th-rounder Exum, and he has a one-year jump on on 2016 7th-round project Kearse. Griffin is a steadily-declining 31-year-old who’s only guaranteed $750K, so I view him as nothing more than a cheap veteran safety net who’s 50-50 to even make the team. Sendejo surely has the inside track to start, but we know he’s best suited for core special teams and backup safety duties.

Don’t let Harris’ UDFA pedigree fool you. As a senior coming out of Virginia, many had him pegged as a second-day prospect on film, but a post-season shoulder surgery left him sidelined throughout the pre-draft process (and early in his NFL career). A 6’1″, 190-pound twig, he has excellent length, intelligence and ball skills, which he displayed in leading the nation with eight interceptions as a junior. He’s not as strong against the run, and is best utilized playing deep with the play in front of him.

I see this as a good compliment to the versatile Smith, who’d be most valuable if used closer to the ball as an attacking playmaker. Instead of interceptions, Mike Zimmer preaches “don’t let your man catch the ball” to his cornerbacks; he hasn’t had a cornerback surpass three interceptions in the last five years. Xavier Rhodes can’t catch a cold anyways, the jury is out on Trae Waynes, and the slot won’t produce enough reps for any single player to contend for the interception lead. Conversely, Zimmer and Jerry Gray want the turnover production to come from the safety spot. Harris has the knowledge to be properly positioned, and the hands and length to capitalize.

Considering Minnesota’s fierce pass rush, I have no problem envisioning Harris as a vacuum who sucks up a half-dozen picks from distressed quarterbacks to lead the team.