Yes, Sam Bradford Has Been the MVP 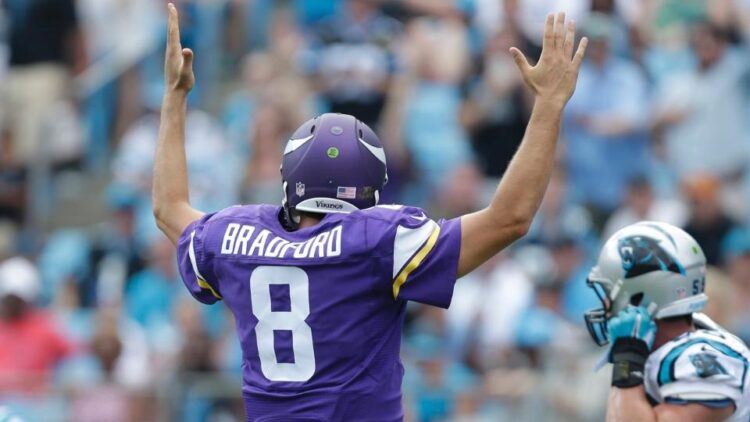 You’ve surely heard by now. On Wednesday, Peter King named Sam Bradford his MVP through the first quarter of the season. This elicited a wide range of responses, many of which amounted to boundless outrage —just look at the replies to this tweet for a sample. The idea was strongly opposed. And those in in opposition generally did one of the following: they offered a different candidate they found more worthy—Matt Ryan and Russell Wilson were named the most, and both are understandable choices—or, more frequently, they said something to the effect of “the Vikings defense is so good! How could Bradford be the MVP?!?!?!”

For his part, I thought King’s explanation made a lot of sense:

[quote_box_center]Normally I wouldn’t want to name a player who missed a quarter of his team’s games the MVP. But I will make an exception for Sam Bradford. Acquired for first-round and fourth-round picks eight days before opening day, Bradford sat out the opener (the Vikings got two defensive touchdowns and won by nine at Tennessee) and started the next three Minnesota games. In those three games, learning a new offense on the fly, Bradford has beaten quarterbacks who have played in four of the past nine Super Bowls, and in each game outplayed Aaron Rodgers, Cam Newton and Eli Manning. Bradford has no turnovers. He has the best completion and passer rating, both by a mile, in his career.[/quote_box_center]

The most important thing in Peter King’s evaluation is the meaning of “valuable.” The MVP award—even a fictional one given out after four games—is about selecting which player matters most to his team. It’s not about who is the most talented or has the gaudiest stats; it’s not simply about picking the “best” player. The “most valuable” player, to me, is the single most meaningful player on one of the league’s best team’s, and someone that, if the taken off that team, would make the team significantly worse.

Okay, he explains it better:

[quote_box_center]The MVP, I think, should never be determined on numbers alone—though they help. The MVP should be about the player who means the most to a very good team, and without whom that team would be Just Another Team. And the Vikings would be 2-2 or maybe 3-1 with Shaun Hill playing quarterback right now.[/quote_box_center]

That’s why I agree with Peter King that Sam Bradford is the MVP so far in 2016. If you want to argue Ryan or Wilson, I can understand that, as they have flashier stats and household names. But considering the circumstances, what Bradford has done is more impressive: arriving in Minnesota a week before the season, debuting on national TV against Green Bay, and skillfully conducting an offense for three games with what has been a mostly atrocious offensive line and zero running game. He lost his starting left tackle and (actual) MVP running back, and didn’t miss a beat. No, he isn’t putting up Drew Brees numbers. Yes, the Vikings offense is average. But maintaining an average offense with those setbacks and a relative dearth of playmakers is impressive. Bradford has taken care of the ball—zero turnovers through three games is a very significant stat—and moved the offense at a reasonable rate, scoring enough points to win and making a few big-time throws per game. You may call it mediocre, but without Bradford, the Vikings offense would be downright bad. He has been the single most impactful player on a team that is among the three best in the NFL.

“But Sam,” you might say, “it’s the defense! The defense is the strength of this team! It’s the best defense they’ve had in decades, and what the defense has done through four games is far more impressive than anything that has happened on offense.”

And I’d be inclined to agree with you, minus the needless exclamation points. Of course the defense is the strength of this team, and is the biggest reason for 4-0. But the MVP is given to a single player, not 11 (or, more accurately 14ish) players. You can’t give an individual award to an entire unit. If you want to go create an MVU award on your own time, be my guest, and I will gladly vote the Vikings defense.

Vikings Territory czar Adam Warwas and I had this argument yesterday; he believes Bradford as an MVP is ridiculous, and wouldn’t even put him in the top five on his own team. Adam would name Harrison Smith the MVP of the Vikings, followed closely by Linval Joseph. Here’s his argument in a nutshell:

I guess I look at it as this: a guy like Smith or Linval are making their units perform at an elite level because they both stop the run and impact opponents in the pass. To what extent the team’s performance drops off in their absence is something none of us want to find out. They’re both playing at an elite level within an elite defense.

Bradford, while I hope he gets there, is just simply leading a below-average offense in a safe and efficient manner. That’s great, but can he put the team on his back and will his offense to a W when the chips are down? This D can (Week One), but this offense has yet to prove they have anything resembling a second gear with or without Bradford.

I agree with Adam that Smith and Joseph are better players than Bradford. As are Griffen and Barr and probably a few others. But here’s why the argument doesn’t hold water with me: the strength of the Vikings defense is that they have so many elite players acting as one unit. If you were to remove Smith or Joseph from the defense, there would be an impact, but it would still be a pretty good defense. Removing anyone from the defense would not have as big an effect as removing Bradford from the offense, and that single concept makes Bradford more “valuable” to this team.

It doesn’t surprise me that national folks might write off the Bradford-as-MVP talk; Minnesota doesn’t have enough sustained success to be considered a banner franchise, and the nationals are partial to such organizations. What I find bewildering is the way Vikings fans have written off the idea. Very few I have talked to think it’s legitimate and many seem to think King wrote the column as a vehicle for a splashy headline and pageviews. This is so not like us—usually we’re the one’s yelling our players don’t get enough respect, and bashing anyone outside state borders who doesn’t appreciate the greatness of our team. To be on the other end of the spectrum, this time, is puzzling, and I think it points clearly to one thing:

Really, I think that’s what it is. In the short time Teddy Bridgewater has played for the Minnesota Vikings, his poise and charisma (and yes, talent) have so captivated us that we don’t want to give too much credit to an out-of-towner for rolling in and leading this team to three straight wins. It feels like it would be cheating, in a way, to give Bradford too much credit, especially since Teddy and his hobbled knee are unable to play. So instead we create a narrative that the team is doing well in spite of the quarterback; that Bradford is doing okay, and, thankfully, he’s not screwing up. That Teddy was ready to take the leap, and if he were healthy, he’d be doing all this and more.

The morning after the Week 2 win against Green Bay, I wrote that Bradford was a better passer than Bridgewater. After a single game, it probably came off like a reactionary jumping of the gun, but in reality it was more of a confirmation of something I had suspected for a long time; when it comes down to throwing a football at a pure, basic level, Bradford has Teddy beaten. It doesn’t mean he’s a better quarterback than Bridgewater, and it doesn’t mean Teddy won’t continue to improve and eventually usurp Bradford and others in the passing department—rather, my bet is he will. But in Teddy Bridgewater, we’re talking about a player whose best season was 3,231 yards and 14 touchdowns, against 9 interceptions, and a wildly unrefined deep ball. Let’s not call him Dan Marino. He does a lot of things well, but, like all players, there are holes in his game. Bradford has a skillset that is more naturally suited to Norv Turner’s offense, and that’s partially responsible for the success we’ve seen this season. He’s doing some things Bridgewater hasn’t been able to do—mainly the deep ball—and it’s not knocking Teddy to point this out. Rather, it’s an acknowledgment that Teddy Bridgewater is still developing as a quarterback, and Sam Bradford has been pretty darn good in his absence. You don’t need to have one or the other; you can appreciate them both in different ways.

Maybe Teddy Bridgewater would be doing all this and more. Maybe he was ready to take the leap. But maybe he wouldn’t, and he wasn’t; there’s no way to know. But the fact is, when he injured his knee and went out for the season, this well-assembled team, with phenomenal defense in tow, needed someone to take Bridgewater’s stead and lead the offense while he’s out. It seemed nearly impossible at the time—just under two weeks before the start of the regular season—but Rick Spielman made a bold move, and it’s worked out better than most of us could have expected. Let’s appreciate a GM with the stones to make that move, despite the price, and a quarterback who stepped in and ensured this team does not go to waste. Sam Bradford has made the offense work, and contributed to the unbeaten start as much as any other player on the roster. Let’s stop expecting perfection and appreciate the good. For Bradford to walk in and make this offense decent is a feat worthy of an MVP.