The Case for Keeping Mike Wallace 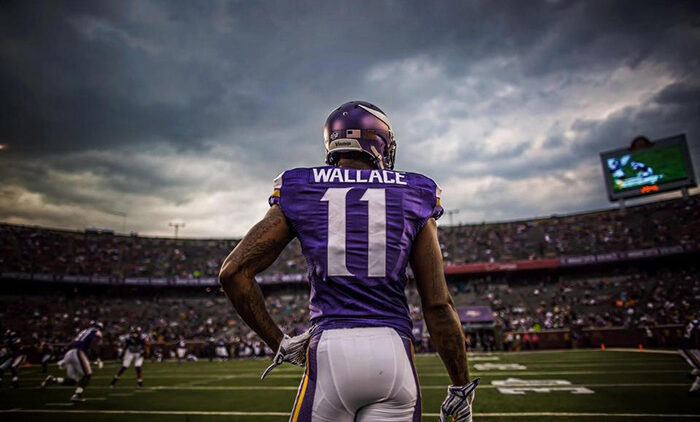 Any way you look at it, Mike Wallace’s first season with the Vikings was a disappointment. He was acquired last offseason to be a deep threat for Teddy Bridgewater and, presumably, resemble a number one receiver. Neither really came to fruition; Wallace posted career lows in receiving yards, yards per catch, and touchdowns, and his longest reception was 34 yards. While he did find a workmanlike niche in the offense, there wasn’t a single game in which Wallace made a major splash. In all, it wasn’t the game-changing presence the Vikings had hoped for.

Wallace is signed through 2017, and owed $11.5 million each of the next two years. That would make him the fourth-highest paid receiver in the league for 2017—not exactly a slot that matches his production. For that reason, many Vikings fans are in favor of cutting bait and using the money elsewhere. However, there are plenty of reasons it makes sense to bring the speedy receiver back for 2016. Here are a few:

He’s not getting the full salary.

It’s highly unlikely the Vikings don’t ask Mike Wallace to restructure his contract and take pay cut. After the season, Mike Zimmer basically said as much when he was asked if he wanted Wallace back.

“Those are all things we have to determine here in the next week moving forward,” Zimmer told the Star Tribune in January. “If it can get worked out, I’d like to have him back.”

Unless the Vikings were asking Wallace to reduce his pay, there would be nothing to “get worked out,” because he’s already under contract. So they’ll ask him to restructure (or already have), and it’s my bet he will. Wallace, according to Zimmer, is happy with the way the team is progressing and happy with Teddy Bridgewater as his quarterback. Chances are he won’t get anything near $11.5 million on the open market, so it makes sense he would take a pay cut to stay with the Vikings rather than start over somewhere else for the same money (or less).

As an aside, even if Wallace played 2016 at his current salary, I don’t think it would be a bad thing for the Vikings. Fans need to remember they aren’t paying Mike Wallace. The Wilfs are paying him, and it’s understandable that the Wilfs wouldn’t want to dramatically overpay players. But, in purely economical terms, cap space is only valuable if it’s being used on a player. The fact that the Vikings are paying Mike Wallace $11.5 million is moot unless that money could be better used elsewhere. And, given the team is roughly $20 million under the 2016 salary cap (and Wallace is only signed for two more seasons), his salary, however excessive, doesn’t figure to hinder the Vikings too much from a cap flexibility standpoint. Assuming Alshon Jeffery re-signs with the Bears, there’s no free agent receiver who would be an upgrade over Mike Wallace.

The production wasn’t actually that bad.

For the money (and the expectations), yes. But Wallace was still third on the team in receptions and receiving yards, behind Stefon Diggs and Kyle Rudolph. Coaches lauded his run blocking, and he acted as a steady, move-the-chains target for Bridgewater on passing downs. Not dynamic, and not production requisite of the salary, but not a Patterson-esque dropoff, either.

Truthfully, Mike Wallace’s decline in production was largely due to factors outside of his control. The shaky offensive line play made it difficult for long plays to develop, and dramatically reduced the opportunities for deep strikes. And there were numerous times when Wallace was open deep, and Bridgewater either overthrew him or didn’t see him. With both of these factors expected to improve in 2016, it makes sense to give Wallace another chance to prove he can be the deep threat the Vikings need.

This is one of the things that was most surprising about Wallace’s 2015 campaign. He has been branded a temperamental, moody receiver for most of his career, and has a reputation for pouting when he doesn’t get the ball. By all accounts, none of these problems surfaced in Minnesota.

“I say this from my heart: I love this kid, I love the way he works, I love the way he competes,” Zimmer told Mark Craig, noting Wallace didn’t complain once about not getting the ball in 2015. “I love him as a person, a competitor, a football player and I’m disappointed that it didn’t pan out the way I envisioned it and that really and honestly, he’s always going to be one of my kind of guys. I like this kid.”

For a coach who has a tendency to be prickly and reserved when discussing players, it’s a pretty glowing endorsement. Locker room chemistry is important in the NFL, and it sounds like Wallace—at least last season—was a plus in that area.

Much like Randy Moss’ illustrious time in Minnesota, Mike Wallace can affect the game without even registering a catch. (Calm down and hear me out). A player with elite speed—which Wallace still has—changes the way you can operate as an offense simply because the defense has to account for the possibility of him beating them deep. He stretches the field. And while it may not have seemed like it in 2015, that threat had an impact on the offense. It allowed Diggs to flourish in his rookie year by giving him more space to operate; without Wallace on the field, defenses would be able to key on Diggs in the passing game. Wallace’s presence at least forces the safeties to take a step back and watch both sides of the field. No, I’m not comparing Mike Wallace to Randy Moss. But having a burner at receiver at least keeps defenses honest.

Zimmer wants him back.

Seems like it should matter, doesn’t it? Zimmer has been steadfast in his praise of Wallace, culminating in the previous comments to the Star Tribune. I think we’ve seen enough to know Zimmer has the team moving in the right direction, and I while there’s a quasi separation of church and state between the front office and the coaching staff, it would be foolish not to heed the head coach’s input about the roster. If Mike Zimmer wants Mike Wallace back, that’s good enough for me.

The WR corps is thinner than you think.

Listen, I love Adam Thielen as much as the next guy. And Jarius Wright has been a solid third or fourth receiver the last four years. But the reality is the Vikings wide receiver corps is an average unit with Wallace in the mix. Stefon Diggs is on his way to becoming a legitimate number one wide receiver, and his combination of raw talent, work ethic, and precise route running is enough to make even the most cynical fan giddy. But beyond Diggs, the unit is a gigantic question mark if Wallace gets jettisoned. The other receivers on the roster are, at best, agreeable complimentary pieces, and you’ll see a constant dose of safety help over the top on Diggs in a post-Wallace world.

Sure, they could use a high draft pick on a wide receiver. But the Vikings would be wise to use their early picks to shore up the offensive line and further bolster the defense, and worry about supplementing the receiver position in other ways. Bringing Wallace back takes care of this.

Mike Wallace still has the talent to be the Vikings’ deep threat. His lack of production last season can be largely attributed to factors outside of Wallace’s control, and it’s imperative the Vikings give Bridgewater every weapon they can if he is to continue to progress in 2016. Wallace will most likely be asked to take a pay cut, and if he agrees to even a moderate reduction in salary, the team could use his elite speed and veteran leadership on an offense that desperately needs playmakers.