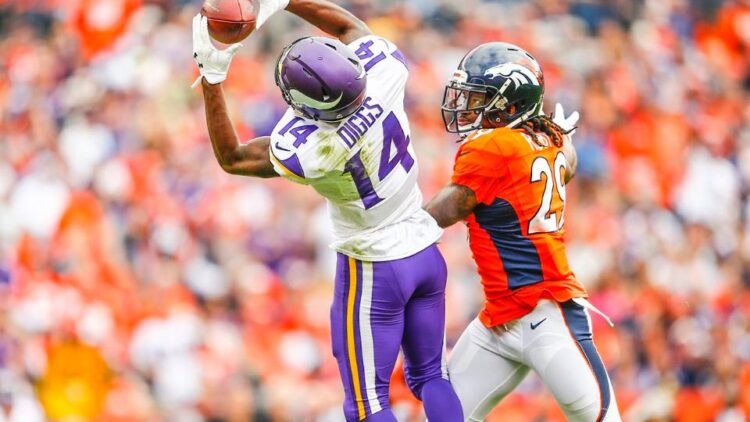 Recently in the Vikings Territory writers room, the topic of Stefon Diggs came up, and to my surprise, a healthy chunk of the staff was not sold on him as a legitimate #1 wide receiver. Pardon? The hands, the speed, the razor sharp route running? The ability to chase down blatant overthrows? I’m firmly of the opinion that Diggs has everything you want in a #1 wideout, so the only option here was to throw the challenge flag and dust off the ol’ coin toss.

Adam explained how the coin toss works in this post from a few weeks ago, but basically it’s an argument between two VT writers. Simple enough. The prolific Austin Belisle volunteered to be the voice of the dissenters, and argue Diggs is NOT a #1 receiver. Here we go!

Sam: In 13 games as a rookie, Stefon Diggs had 52 receptions for 720 yards and 4 touchdowns. Statistically, he had a better first season than Antonio Brown, Brandon Marshall, Jordy Nelson, Alshon Jeffery, and Michael Irvin (and almost identical to Calvin Johnson), to name a few. He received effusive praise from teammates and Mike Zimmer all year, and made numerous highlight plays.

Austin, you say Diggs is a #2 receiver, and compare him to Golden Tate. Explain yourself.

Austin: Hey, hey. I love Stefon Diggs, I think he’s the best Vikings wide receiver since Sidney Rice was in town. But I’m not ready to call him the team’s next, great, No. 1 wide receiver. Yes, Mike Wallace compared Diggs to Antonio Brown, and I can understand why. The size, short-area burst, and athleticism jump off the screen. But Diggs is a second-year wide receiver who still hasn’t learned how to defeat double coverage. After his 108-yard performance against the Detroit Lions in Week 7, Diggs didn’t hit the century mark again all season. When defenses shifted coverage his way, he failed to get open, and that’s a problem Brown doesn’t have. Until Diggs can turn targets into touches and produce like a No. 1 receiver, I’ll hesitate to call him such.

As for the Golden Tate analogy, Sam? You’ll have to wait for my next response. What do you got?!

Sam: Okay, good—that response was actually quite rational. At the very least, I know you haven’t gone off the deep end. BUT I think we’re being a little too harsh on what he didn’t do in his rookie year. Of course is isn’t comparable to Antonio Brown yet; no one is. Even Brown himself only had 66 catches for 787 yards in year three—he didn’t truly break out until his fourth season in the league. Of course Diggs hasn’t learned to beat double coverage; virtually no rookie does (Randy Moss’ scintillating rookie season comes to mind as an exception, but he was helped enormously by having Carter on the other side). It’s a process, and it takes time. But I think we’ve seen enough from Diggs to know he has what you want in a #1 guy. Am I putting him on Brown-eque numbers in year two? Of course not. Still too many limiting factors within the offense–not to mention Diggs’ continuing development–to expect that to happen. But anything south of 70 catches would be a disappointment.

Austin: Ah, perfect, that’s a nice segue into my next point — the limiting factors of the offense. Namely, Adrian Peterson’s presence behind Teddy Bridgewater. With Peterson rushing the ball on 35 percent of the team’s offensive snaps, Norv Turner has created a run-first system that caters to No. 28. His reliance on Peterson and the struggles of the offensive line in pass protection put Teddy and the receivers in a position to fail. As long as Peterson is demanding 300+ touches per year, it’s difficult for me to see anyone, even Diggs, putting up numbers like a traditional top receiver. You can look back at 2014 and see what the offense was like without Peterson, but again, the top receiver was Greg Jennings, and I think we can both agree that Diggs is a better option now. Still, he’ll never have a chance to break through that ceiling unless two things happen — Peterson touches the ball LESS and the offensive line makes a complete 180-degree turn in 2016. This isn’t the Vikings team of 2009, and Sidney Rice isn’t catching passes from Brett Favre.

But who’s to say the Vikings couldn’t use a tall, lengthy, red-zone target like Rice on the outside? I hear there’s a few available in the Draft…

Sam: I’ve heard that as well. I do THINK the Vikings will draft a receiver and I do WANT them to draft one. Just—barring something crazy like Laquon Treadwell falling to them—not in the first round.

ANYWAY, that’s neither here nor there. I think we’ve come to the point where we’re splitting hairs over whether Diggs will produce like a #1, or whether he has the talent to be one. And I don’t think you need the former to satisfy the latter—heck, just a season ago, Larry Fitzgerald only managed 63 catches. Why? Just like we said about Diggs, limiting factors on the offense (in Fitzgerald’s case, god awful quarterback play for a good part of the season). Also, look at Sidney Rice’s production in all non-Favre years. Not…especially good. Receiver is the position most dependant on others to do his job. And I agree it may take some time for Diggs to put up #1 numbers, but that doesn’t mean he isn’t a #1.

Alright, because I’m a charitable guy, I’m giving you the last word.

Austin: Well, that’s a buzz-kill. Here I am arguing that he won’t become a No. 1 receiver, when in actuality, he has all the tools to do just that. Right now, he’s Antonio Brown-lite, and I think we can both agree that the Vikings should be happy they got such a steal in the fifth round. So yes, he can be a No. 1 receiver, but I don’t think he’ll ever be given the opportunity to do so in Minnesota. Look at the Lions, a team the Vikings can emulate offensively. When Golden Tate and Calvin Johnson were together, Tate caught at least 90 passes, eclipsed 800 yards, and scored at least four touchdowns, all while playing a secondary role to Johnson. If the Vikings do add a Megatron-like receiver in the draft, Diggs should have no problem matching those numbers. So hey, maybe being a top WR is overrated.

Now that Sam and Austin have stated their cases, you all get to play the jury on this, and let us know who wins this round .

Is Stefon Diggs a #1 receiver? Or is he better suited for a complimentary role? You decide below!