Book Review: 100 Things Vikings Fans Should Know & Do Before They Die 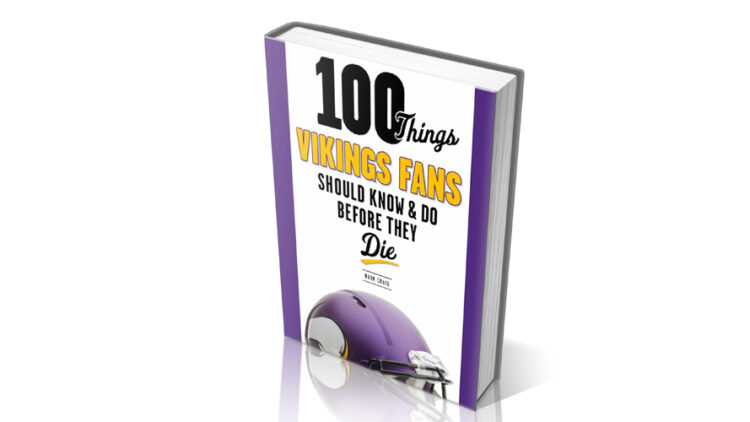 I’ll start with a bit of unbridled truth: I really wanted to like Mark Craig’s book, 100 Things Vikings Fans Should Know & Do Before They Die (Triumph Books, available October 1, 2016). For one, I’ve admired Craig’s work with the Star Tribune for years, and consider him a gifted writer and one of the more astute NFL minds in the market. Me criticizing him on sports writing would be like Ashlee Simpson giving Beyonce voice lessons. Two, as someone who has written a few books myself—and gotten my share of…um…mixed reviews—the last thing I want to do is drop the hammer on another author. Nothing changes the way you look at criticism quite as much as being on the receiving end.

So when I accepted the offer to review 100 Things, it was with mixed emotions. On one hand, I was excited to read Mark Craig’s first endeavor into book-length Vikings journalism. On the other, I was scared it wouldn’t be that good. That would make things complicated, and awkward.

I promised myself before I dove in, when I was done with the book, I’d write an honest review no matter what. I’d give my thoughts and overall impression as an admittedly half-baked reviewer, but one who tells the truth, because I cannot think of many things less interesting than reading a biased or otherwise insincere review. I’ve read my share of thinly veiled press releases, and I had no interest in spending time writing one.

So I was elated (and a touch relieved) to discover this book not only met, but exceeded my expectations. Within five pages it was clear that Craig has no difficulty translating his smart, concise style from the newspaper (and the web) to the pages of a book. Within 10 pages, I was transported back to the 1998 NFC Championship game—the fourth item covered—reliving the agony and re-learning all the details I had forgotten (Anderson’s ill-fated field goal would’ve put the Vikings up by 10…the team won the toss in overtime…etc.). We could’ve at least waited a little longer before driving that knife in, couldn’t we have, Mark?

The book itself is structured in 100 quick-hitting segments, most about the length of a newspaper column, that touch on topics from the formation of the franchise in 1961 to Blair Walsh’s missed 27-yarder that ended the 2015 season. For this reason, it’s easy to digest, and perfect for picking up off the coffee table for a few Vikings nuggets on a Saturday afternoon. There are chapters, of course, on the most well-known moments and players to the modern fan; titles include “A.P. and the Chaotic 2014 Season,” “Favre Arrives,” and “The Herschel Walker Trade.” But perhaps most rewarding is when Craig takes the reader on a dive into Vikings deep cuts; “Fred Cox, the Father of the Nerf,” “Stormin’ Normin,”and “Keith Millard’s Guns,” among others, give us a glimpse into the lesser-known, but still wildly entertaining, history of the franchise.

Despite the title, the book doesn’t focus much on things Vikings fans should “do” before they die—there are notes about U.S. Bank Stadium and Adrian Peterson day, plus a few others, but these make up less than 10% of the material. What the book is, overwhelmingly, is an encyclopedia of all things Vikings history. And that’s a good thing, because Craig does it well. He’s spent decades covering the beat, and has seen about everything, and the book shines most when he’s recounting events with the unmistakable personal touch of someone who lived through—and and wrote about—them. Of course, he wasn’t around for everything, so Craig fills in the gaps with sound research and a heavy help from the ol’ Strib archives.

One of my favorite things about book is its balance; it has just the right mix of old and new. It takes us from Bud Grant to the Purple People Eaters to the Love Boat fiasco in the span of just a few chapters, and we of course make stops at all four Super Bowl losses before the book is done. If you’re looking for a more complete history of the franchise, you aren’t likely to find one. The writing is succinct and clean (a style I find personally appealing), so fans seeking flowery homerisms and over-the-top tales may not find satisfaction here. Still, Craig is far from dry, and gives us plenty of warm quotes and inside stories to keep the pages turning.

Also, Randall McDaniel wrote the foreword to this book, and the most interesting part, by far, is his description of Craig’s diligent work on behalf of past Vikings in their bids for the Hall of Fame. McDaniel notes Craig was instrumental in the selections of himself, John Randle, Chris Doleman, Cris Carter, and Mick Tingelhoff.

The book ends with chapters on Rick Spielman, Mike Zimmer, and finally, the 2015 season—and beyond.

“Perhaps Zimmer is the man to win that elusive Super Bowl,” Craig writes in the final passage, “to take the franchise one step further than Bud Grant, another no-nonsense coach whose words and actions were delivered straight between the eyes.”

We finish with this look forward, lined with a glimmer of hope of the ultimate prize that has eluded the Vikings throughout their history. In this moment, and many others like it throughout the book, we see Mark Craig for what he is beyond the columns and deadlines and box scores: a football fan. He wants to see that Super Bowl win just as much as the rest of us. It just so happens he’s seen a lot of other things, too.

You can buy 100 Things Vikings Fans Should Know and Do Before They Die here.