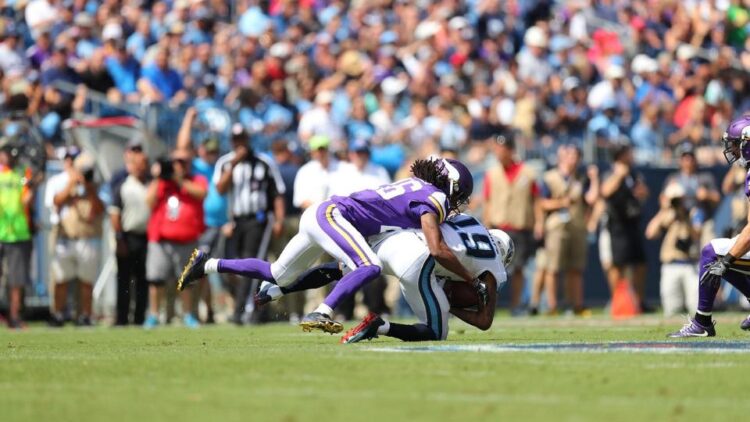 It wasn’t easy, but the Minnesota Vikings came away with a Week 1 win over the Tennessee Titans. The road to victory had its share of bumps, with the Vikings falling behind 10-0 in the first half. Tennessee’s formation shifts and personnel changes kept Mike Zimmer’s defense off balance, and combined with Blair Walsh’s spotty kicking, made yesterday’s first two quarters a frustrating affair.

But Zimmer and the coaching staff adjusted at halftime, finishing the game on a 25-6 run that sealed Minnesota’s victory. Outside of a strong defensive showing — two return touchdowns — the Vikings also left Tennessee with few bruises or injuries. At this early point of the week, Xavier Rhodes’s knee is the only major concern; an encouraging development as the team prepares to host the Green Bay Packers on Sunday Night.

Following the game, Zimmer took the podium and cleared the air on the surprising deactivation of his top cornerback. According to Zimmer, Rhodes was stretching before the game and “heard something pop” in his knee.

The fourth-year corner told the Star Tribune’s Andrew Krammer that he woke up yesterday and something “didn’t feel right.” His comments suggest the move was precautionary, and Zimmer will reveal more when he addresses the media at 2 pm CST this afternoon. Rhodes was scheduled for a “scan” last night to assess the severity of his knee injury.

With Rhodes out, Trae Waynes started at right cornerback and had an up-and-down game for the Vikings. He played all 67 defensive snaps, recording 10 tackles and a tackle for loss on a critical third down. Waynes appeared lost at times, but held his own on the boundary and kept everything in front of him. On the opposite side of the field, Terence Newman missed two snaps but returned to the game after a brief stint on the sidelines.

The health of Rhodes is crucial to Minnesota’s success, especially in Week 2. The Packers come to town with their complete complement of receivers, including Jordy Nelson, Randall Cobb, and Davante Adams. To match up they way he’d like against Green Bay, Zimmer needs his cornerbacks healthy, from Rhodes down to Mackensie Alexander.

Of those who played, all appeared to escape without major injury. Sharrif Floyd, who’s still rounding into game form after a sporadic offseason, played just 25 snaps. Zimmer employed a defensive line rotation that saw Shamar Stephen (10) and Tom Johnson (29) on the field for a significant chunk of time.