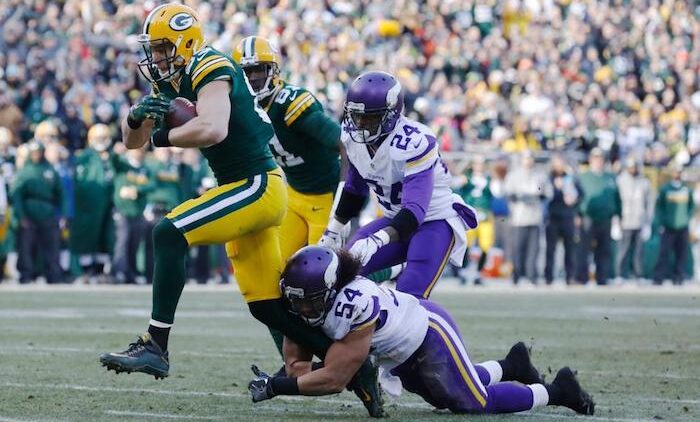 If losing 38-25 to the Green Bay Packers and seeing their playoff dreams crushed in front of their eyes on Saturday was not enough, what came out of the Minnesota Vikings speaking to the media after the game may have been the worst news of the day.

During his post game press conference, Vikings coach Mike Zimmer was asked about why cornerback Xavier Rhodes only shadowed Packers wide receiver Jordy Nelson in the second half of the game.

“That’s what he was supposed to do the whole game. So someone decided that they weren’t going to do that.” – Mike Zimmer

Rhodes then told reporters after the game that he and the rest of the defensive backfield decided to go against Minnesota’s game plan on Saturday and just stick to covering one side of the field.

“We felt as a team, as players, we came together and we felt like we’d never done that when we played against the Packers. Us as DBs felt like we could handle him. That’s how we felt as DBs that we could stay on our side and cover him. In the beginning, we’d always played against them and played our sides, so that’s what we as DBs went with.” – Xavier Rhodes

So let’s take a look at how the Vikings fared in each half with two different strategies to cover the Green Bay receivers.

In the first half with Rhodes and the rest of his buddies in the defensive backfield doing whatever they felt would work, the Packers offense scored 28 points and threw for 268 yards. With Zimmer’s game plan back in place for the second half, Green Bay’s offense only put up 10 points and 79 passing yards.

Other aspects of Minnesota’s game can be blamed for their loss on Saturday, but what the defensive backs decided to do has actual statistical proof that it was a main factor in the game’s eventual outcome. So enjoy the Pro Bowl Xavier, because that is the only extra football you will be playing after next week’s final game of the season.

More may come out in the future about the situation, but for now it is not a good look for the players that were allegedly involved.

At least Vikings wide receiver Adam Thielen can look forward to making a pretty penny next year after he had yet another impressive game on Saturday (12 catches, 202 yards, two touchdowns). But other than Thielen, there is not really a whole lot for Minnesota to take out of this game.

If anyone thought this season was crazy, just wait until the offseason.