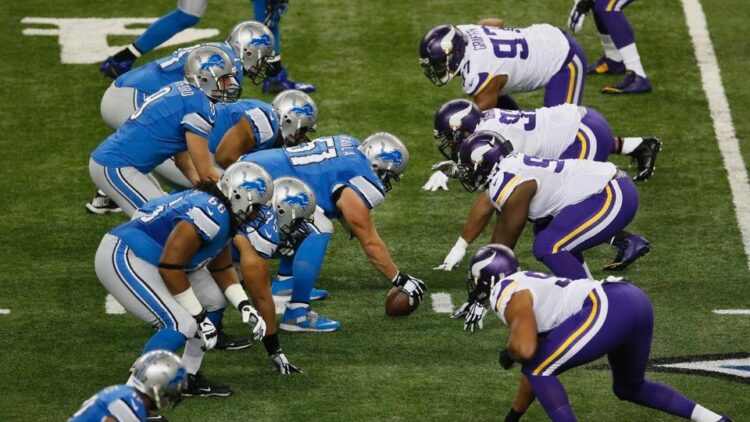 In Week Seven of the 2016 NFL regular season, two NFC North teams won, and two lost. Unfortunately, one of the losing teams was none other than our beloved Minnesota Vikings. They still boast a division best 5-1 record, but valuable ground was lost in the standings this week.

Perhaps even more importantly, a blueprint to beat the Vikings is now sprawled out across the table in plain sight of all opposing coaching staffs. That plan includes overwhelming an offensive line that may be incapable of changing things up (or, you know, getting better) in a meaningful enough way to fend off the league’s better defenses.

While flaws were exposed by Philadelphia this week (flaws that most Minnesota fans suspected would surface at some point) there are no other teams in this division that are without blemishes of their own. For that reason, it is important to stay grounded and remember that securing a playoff spot is the only real prerequisite for making a run at the Super Bowl.

And what’s the best way to secure a playoff spot? Why, winning the North, of course!

Let’s take a look around the NFC North and see what our greatest enemies are up to.

Despite being so injured at the running back position that they used a wide receiver in that role, the Packers were able to best the Chicago Byes (intentional typo) without much problem. The game plan was as easy to identify as it was predictable for the Green Bay offense. Aaron Rodgers spread things out, took high-percentage throws against a terrible defense, and coasted to victory.

In fact, Rodgers completed 39 of his 56 attempts, which was a new franchise record. Previously, Brett Favre owned the high water mark of 36 completions in one game.

Despite a long week of rest, the Packers are not expected to have Eddie Lacy or James Starks back in the lineup in the immediate future, leaving them to consider some sort of Ty Montgomery and Knile Davis concoction in the meantime. That likely means more pass-heavy attacks are in their future.

The question then becomes just how that one-dimensional approach can hold up against defenses better than Chicago’s (which is almost anyone). A better overall test is on the horizon with the Atlanta Falcons up next. The 4-3 Falcons aren’t a huge threat on defense, but their ability to put up hoards of points may mean the conservative passes won’t cut it for Rodgers and the gang this weekend.

Following a win at home against the Redskins, the Detroit Lions continue to play a middle-of-the-road season as a team capable of self-destructing at any moment… And also upsetting some talented teams. They should not go underestimated on the schedule, and the Vikings will play them twice next month.

One major reason this inconsistent team should be consistently respected by opponents is the level of play coming from Matt Stafford.

Stafford has completed 68% of his passes this season, already amassed 1,914 yards, thrown 15 touchdowns, and has just four interceptions. If he can continue to overcome the onslaught of injuries on offense, and build on this three-game winning streak, then a playoff berth will remain in reach for Detroit and immediately propel him into the MVP discussion.

The Lions travel to Houston this coming week, before getting the Vikings a week later, and you can count me among those that will be watching closely to see how well they fare.

And here is the bottom of the barrel… an already untalented team that has had a machine gun spray of injuries riddle its roster before the halfway mark. Oh, and they are who the Vikings play next week on Monday Night Football.

We’ve discussed before in this weekly roundup that Chicago head coach John Fox was willing to stick with Brian Hoyer even after Jay Cutler returned to play following his thumb injury. As it turns out, Hoyer broke his arm last week and now Cutler is magically ready to jump back into action and face off against a hungry Mike Zimmer defense.

I’m not sure that the return of Cutler is enough to give Chicago any hope this Monday, but I will confidently say that his return will not be enough to result in a serious run at the division (or the playoffs at all) this season.

This will be Minnesota’s second divisional game of the season, always an important matchup in the standings, and they would be wise to come out with a little (a lot) more conviction than we saw in Philadelphia to ensure no embarrassments take place in prime time this week.