Joe Kapp: “I’ve got Calendars on both of my shoes” 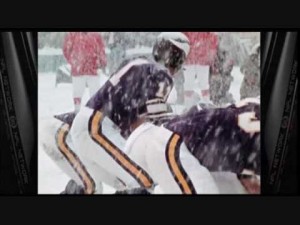 Even in the aftermath of NFL football putting on the most popular one-night event of the year, we continue to get our daily reminders that football endangers the men that play it, coming in the form of revelations about the men that used to play it.

Last week, an autopsy confirmed that former Vikings linebacker Fred McNeill was living with chronic traumatic encephalopathy (CTE) before he died of Lou Gehrig’s Disease at 63 years of age last year. In an all-too-common tale from players of that generation, it has been made public that McNeill suffered from dementia in his later years.

Now, it is a living Vikings great that is making headlines for health concerns possibly stemming from his playing days.

Joe Kapp, 77, has confirmed the public speculation that he is diagnosed with Alzheimer’s disease and he seems convinced that football likely played a major role. The Centers for Disease Control states, according to the Mercury News feature on Kapp, that football players are four times more likely to suffer from Alzheimer’s than the general population.

Kapp is currently participating in a UCSF neurological study and plans to donate his brain for further examinations post-death.

“When I cash in,” says Kapp, “they will take the brain and study it.”

As a common form of therapy for people suffering from dementia, Kapp’s family got him a black lab puppy as a Christmas gift, which he affectionately named “Mike” after the linebacker position in the middle of any defense.

“It’s past the time of concern,” Kapp says of his new reality. “Every single day I live being forgetful. I’ve got calendars on both of my shoes.”

As hard as it can be to let these real-life issues take away from the real-life fun that is watching NFL football, it is important to remember and keep in mind that others have paid a high price to get the game where it is today.

Unfortunately, the advances are probably not there yet either, and some of the guys we are watching today are paying the price to make football what it becomes in the future.

I encourage all Vikings fans to read the entire article on Joe Kapp by clicking right here.