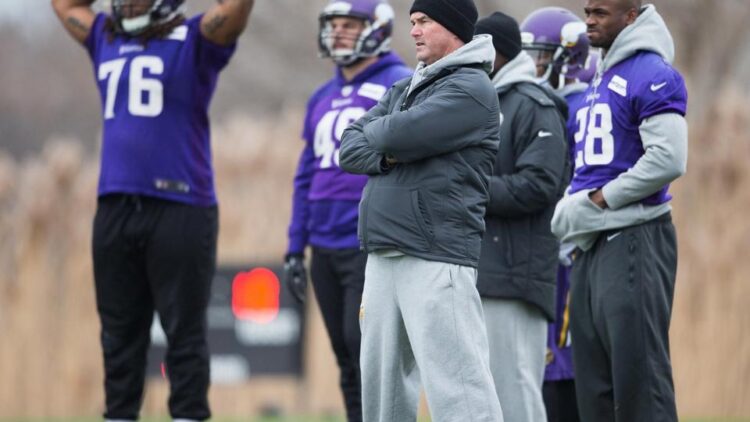 Living in California, “cold weather” is considered anything below 50 degrees Fahrenheit. That’s warm for Vikings fans in Minnesota, right? For those attending Sunday morning’s Wild Card matchup with the Seattle Seahawks, they’ll need all the warmth they can get; according to Weather.com and AccuWeather, the forecast in Minneapolis calls for a high of 1℉, with a 10-15 mph wind chill factor and a low of -9℉ at kickoff.

When the teams first met at TCF Bank Stadium in December, they enjoyed unseasonably warm temperatures that eclipsed freezing at kickoff. This Sunday, they’ll meet in what could be one of the coldest games in NFL history. When asked Wednesday how the potentially sub-zero temperatures could affect his team, head coach Mike Zimmer seemed unfazed by the cold.

“The cold is the cold, he told reporters. “The ball is going to be harder, a little more slippery. I think it’s going to be a lot of concentration when guys are out on the field, they’ve got to concentrate and really don’t worry about the cold, you worry about playing.”

For the most part, Zimmer’s teams have played well in the cold. Quarterback Teddy Bridgewater has been especially efficient, posting a 6-3 record in games under 40℉ since 2014, his rookie season. In those contests, he’s completed 66.5 percent of his passes and thrown for 191.8 passing yards per game while compiling a 12-5 TD-INT ratio and 97.1 passer rating. Since moving to TCF Bank Stadium last year, the Vikings are 5-2 at home in games under 40℉, per the table below:

“We’ve luckily been in some of these elements games, the Carolina game a year ago, the Giants game on Sunday night, and Green Bay last week,” Zimmer said. “I’m sure (Seattle has) probably been in some as well. It’s just something that we’ll deal with.”

As the NFL’s Kevin Patra noted earlier today, the Vikings moved the home sideline to the northern end of TCF Bank before the start of the 2014 regular season. Why? Stadium analysis showed temperatures would be “noticeably warmer in the sun on that sideline, compared to the late-afternoon shadows on the south side of the stadium,” per ESPN’s Ben Goessling. Against the Panthers last season, a game played in 12℉ temperatures, the Vikings found a 20-degree temperature difference between the home and away sidelines.

When the Vikings host the Seahawks this Sunday, they’ll need every competitive advantage they can get. The first meeting ended in disaster for Minnesota, as Seattle handed the Vikings a crushing 38-8 defeat behind Russell Wilson’s three-touchdown performance. The Seahawks’ defense limited Adrian Peterson to just 18 rushing yards on eight attempts and held the Vikings offense to zero points; Minnesota’s lone touchdown came on a 101-yard kickoff return from Cordarrelle Patterson in the third quarter.

Like his head coach, Bridgewater sees Sunday’s game — and the freezing temperatures — as just another hurdle in a season-long stretch of obstacles. “We’ve had come cold games dating back to last year,” he said, speaking to the media on Wednesday. “We feel like it’s a mental thing. The guys have bought in…Coach Zimmer being our head coach, he’s a tough guy…The guys understand the challenge that’s in front of us and they’ve been doing a good job answering Coach Zimmer’s challenges.”

Sunday’s Wild Card game will be the team’s toughest challenge of the year. Have they grown enough from their Week 13 embarrassment, and can they handle the elements while playing postseason football in the middle of a Minnesota winter? We’ll have to bundle up and see.