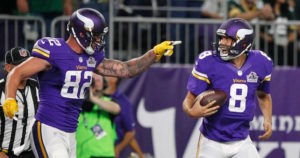 Not only was it the regular season debut for the Minnesota Vikings at U.S. Bank Stadium, but quarterback Sam Bradford made his own debut in a purple and yellow jersey on Sunday night. He certainly looked impressive as he guided the Vikings to a 17-14 win over the Green Bay Packers.

With the win, Minnesota is now alone atop the NFC North division.

The victory, however, did not come without a cost. Vikings all-pro running back Adrian Peterson left the game toward the end of the third quarter with an injury to his right knee. He could not put any weight on his right leg and was seen being helped back to the locker room by the Minnesota training staff.

But back to Bradford.

His play on Sunday certainly kept his doubters quiet for at least another week as he finished completing 22 of his 31 passes for 286 yards and two touchdowns. If he continues to play like he did against the Packers, Teddy may have to look elsewhere for a job in this league when he gets healthy again.

Much of Minnesota’s success in the air on Sunday had a lot to due with the outstanding play of wide receiver Stefon Diggs. He just played out of his mind on Sunday.

The Vikings’ second-year receiver exploded for a career high nine catches for 182 yards and one touchdown. It looks like Bradford has already found his favorite target on this team.

If there was anything that could have prevented Minnesota from exiting the building 2-0 tonight it would have been the uncharacteristically, high amount of penalties. The Vikings were penalized 13 times for 137 yards and a majority of those came courtesy of their young cornerback Trae Waynes.

Luckily for Waynes, his game sealing interception in the final two minutes should help Minnesota’s fans forget about all those penalties.

Now Minnesota will prepare to take on the defending NFC Champion Carolina Panthers and quarterback Cam Newton in Week 3. The road to greatness is never an easy one and the Vikings are quickly finding that out.