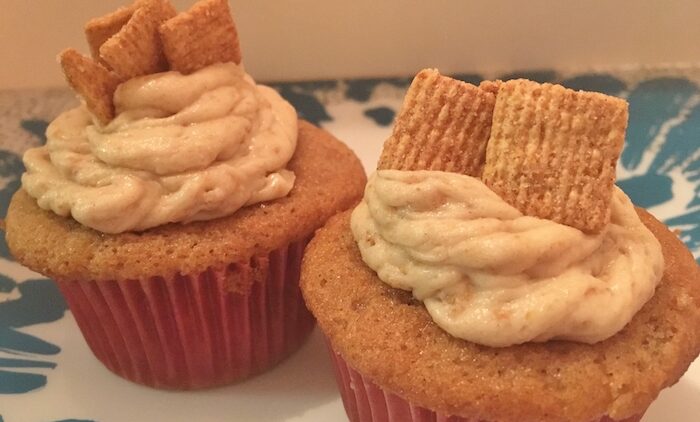 So sad to even have to write this but the Vikings lost again. This was a very tough loss against the Colts only scoring six points the entire game. Unfortunately with this sad news comes the fact that the Vikings have to win their next two games in order to even have a chance at going to the playoffs.

Hopefully the Vikings will work on winning their next two games, starting this Saturday playing against the Green Bay Packers.  If, but really when, the Vikings win this game, it will be the first time since 2009 that the Vikings have won both games against the Packers in one season.

While I was making the batter and getting the cupcakes into the oven, Adam was making the frosting. It was something fun we did together and gave us extra time to be with each other when we would have normally been split doing our own thing in separate rooms of the apartment.

These cupcakes bring some serious joy and for more than just the ability to spend extra time together. I left a few at home for Adam and I to share and I brought the rest into work to share with my department while we did a secret Santa exchange and by the smiles on everyone’s face, I know everyone loved these cupcakes as much as Adam and I did.

The cupcakes themselves are light and fluffy. The cinnamon that is in the cupcakes adds just a bit of spice to give you those loving, warm feelings. Even though the cupcakes are scrumptious, the real star is the frosting. The frosting is a basically a classic butter cream with a bit of a twist by adding the cinnamon toast crunch. The cereal adds some more of that warmth but also takes the sweetness to the next level. The cereal also adds a bit of a crunch to the treat giving some great texture.

One of the best things about these cupcakes? Since the frosting is made of cereal, there is no real reason why you can’t have one with a big glass of milk for breakfast. What else is being an adult good for if not for eating cupcakes for breakfast? I am pretty sure Buddy the Elf would agree!

Please try these cupcakes out! Everyone at your Christmas celebrations will simply love you and be in awe of your skills! Don’t forget to let me know what you think in the comments below. As usual, be sure to follow my husband, Adam, on twitter at (@Str8_Cash_Homey) in order to get all of the Vikings news you need.