Is Xavier Rhodes a Shutdown Corner? 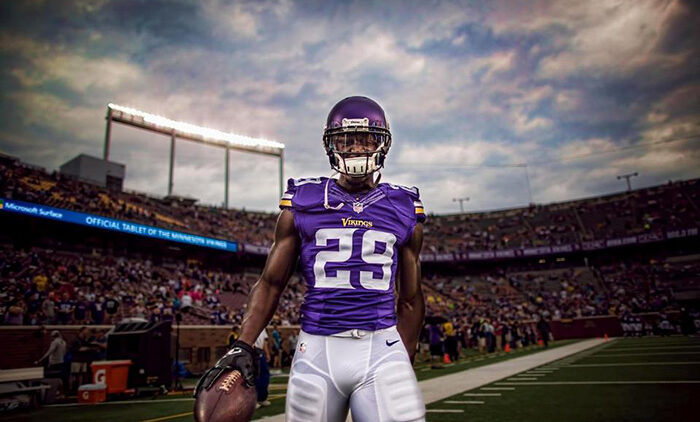 When the 2014 season came to a close, Xavier Rhodes looked poised for stardom. After an up-and-down rookie campaign—par for the course for NFL defensive backs, even first round picks—Rhodes took a dramatic leap in year two, improving his coverage skills significantly and becoming known as a pass break-up machine. Pro Football Focus rated him as the NFL’s 14th-best corner that year—not Revis status, but a nice ascension for a second-year player. Fueling the narrative of a player on the rise, Rhodes had a downright dominant four-game stretch late in the season in which he allowed only seven catches and a 22.2 passer rating for opposing quarterbacks.

Rhodes blossomed under the tutelage of head coach Mike Zimmer in 2014, Zimmer’s first year at the helm for the Vikings. Zimmer is, of course, known for his defensive pedigree, and it seemed like he was quickly molding Rhodes into a complete, number one corner. The thought after Rhodes’ sophomore season was that, based on his enormous progress in year two, 2015 would be the year he developed into a legitimate shutdown corner, able to shadow the opposing team’s top receiver on a weekly basis.

2015 was an up-and-down season for Rhodes, and as the year wore on, it became hard to ignore that Xavier Rhodes hadn’t yet ascended to greatness the way we’d expected. In fact, he often looked out of position in coverage, and more of an average corner than the shutdown one we saw in late 2014. Rhodes’ play gradually improved as the season progressed, but enough mistakes lingered to make Vikings fans wonder what was going on. Penalties remained an issue—after committing 8 (accepted) penalties in 2014, Rhodes had 10 in 2015, tied for second most among NFL cornerbacks. Vikings coaches had him wear boxing gloves in practice to try to curb his habit of grabbing. And in passes defended—hardly the last word on a corner’s overall contribution, but worth considering—Rhodes went from 18 (T-4th in the NFL) in 2014 to 11 (T-34th) in 2015.

Cornerback is one of the hardest positions to judge, especially from a fan’s perspective. Game broadcasts rarely show a coverage through the entire route, and even when they do, what looks like a blown coverage by one player can often actually be a mental error from another. For example: if a corner gets beat deep, it can be because he was supposed to have safety help and the safety never broke. Or because there was confusion on another assignment. Or the corner just got beat. Basically, it’s hard to tell unless you know every defensive call.

With that in mind, we can still make a reasonable assessment of a corner’s level of play using both statistical analysis and the good ol’ eye test. Pro Football Focus, which analyzes every play of every game and grades players accordingly, isn’t something we take as gospel when determining a player’s worth, but it is a useful metric that adds to the discussion. And PFF’s season-long grades point to a clear regression in Rhodes’ 2015 campaign. The aforementioned article graded him glowingly in 2014, and hinted he was approaching elite status, but 2015 saw PFF drop him from 14 to 57 on its list of top corners. Rhodes overall grade was 70.6, lower than Perrish Cox, Trevin Wade, and Dontae Johnson, to name a few, and also worse than his teammates Terrence Newman (39) and Captain Munnerlyn (18). Some of this can be attributed to the level of competition; as the team’s clear number one corner, Rhodes faced elite receivers nearly every week in 2015, and to see a bit of an adjustment period is understandable. But Richard Sherman, Patrick Peterson, and Tyrann Mathieu are all ranked in PFF’s top five cornerbacks, proving the rating system isn’t overwhelmingly biased against players asked to cover the opposing team’s top receiver.

The other interesting thing about Xavier Rhodes PFF grades is what happens late in the season. Similar to Rhodes’ influential four-game stretch near the end of 2014, he had an almost identical period of dominance over the final four games of 2015 (three Vikings wins and a last-second loss at Arizona). Taken alone, this was assumed to hint toward a player “figuring it out” at the end of 2014, but having the same upward trajectory at the end of the 2015 after struggling much of the season is confusing at best. Okay, so stats can be manipulated to say just about anything. Maybe. But the second half of the equation—analysis of Rhodes by simply watching the games—hints at the same conclusions. The illegal contact and pass interference penalties were a constant hindrance to the Vikings defense, often extending opponents’ drives. And all too often, Rhodes could be seen trailing receivers with his back to the ball when it was in the air.

Here’s an example of excellent coverage technique, of which Rhodes is definitely capable. He stays on the receiver and turns his head to play the ball, almost drawing an offensive pass interference call. Some contact from Rhodes but not enough to throw a flag. Textbook downfield coverage.

And a few examples of breakdowns in technique. He allows the receiver to get a step on him and never turns to look for the ball.

Of course, some of these can just be attributed to “getting beat,” which is going to happen to every corner at some point. But there were numerous points in the mid and late parts of the season when Rhodes DID have good position, but just didn’t turn to look for the ball. This happened on multiple occasions against James Jones, and, to me, points to a shaken confidence. The top corners trust their abilities and look to make plays on the ball; less confident players often just try to “get in the way” of the receiver making the catch, which can work in a pinch, but leads to long receptions too easily.

Where it stands, Rhodes is an above-average corner and a suitable number one, but his progression slowed in 2015 and, at times, went backwards. He does tackle well, but the penalties are still an issue, and a few bad coverage habits that surfaced in 2015 are alarming. Rhodes has talent that defensive coaches dream of; his combination of strength, speed, and fluid hips make him a natural for the position. In stretches, we’ve seen what this talent can do with sound technique, and if Rhodes’s technique can rebound, he has the tools to be a shutdown corner.

If I had to guess, I’d say Rhodes shores up some of the problem areas and takes another step forward in 2016. Even if that happens, I’m not sure we’re ready to elevate him to Josh Norman status—the margin for error is so low for cornerbacks, they have to be borderline perfect on almost every play to be considered elite. But Zimmer has a long history of getting the most out of his defensive players, and until proven otherwise, I’m going to trust his ability to turn top-notch talent into top-notch football players.

2016 may not be a make-or-break season for Xavier Rhodes, but a failure to show a positive progression would hint at a career that will wind up being more good than great. Here’s hoping for the latter.