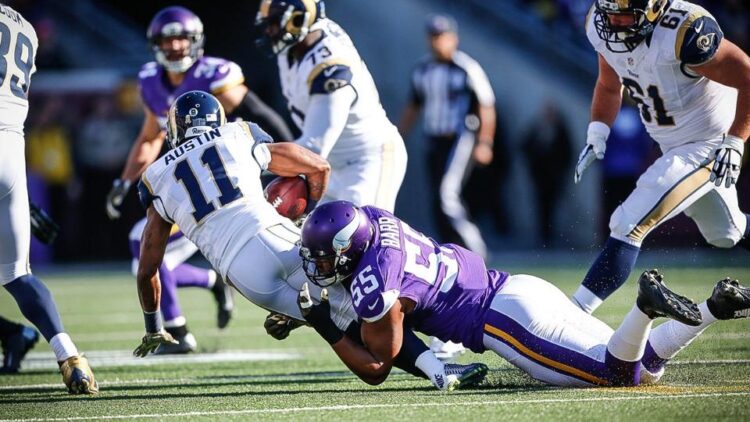 Blair Walsh’s 40 yard field goal in overtime gave the Vikings a 21-18 victory at TCF Bank Stadium against the St. Louis Rams on Sunday. Mike Zimmer’s defense came up big again this week holding Todd Gurley to 86 yards and one touchdown on 24 carries ending his four game streak of 125-plus yards per game.

In a grind-it-out affair that saw Teddy Bridgewater get knocked out of the game with a concussion, solid defense plus 125 yards rushing from Adrian Peterson helped propel the Vikings past an evenly matched Rams team.

The Vikings won the overtime coin toss and elected to kickoff. Zimmer’s confidence in his defense paid off as they held the Rams to a three-and-out and forced a punt. Marcus Sherels tiptoed down the sideline on the 26-yard return and Peterson contributed 21 yards on the ground to move the Vikings into game winning field goal range.

Chad Greenway and Linval Joseph led a stout defense with 10 combined tackles each and held the Rams to just 2-of-16 on third down efficiency forcing 8 punts on the day.

The Vikings took an early 10-0 first quarter lead on a Blair Walsh 34-yard field goal and a 6-yard touchdown run by Peterson around the right side where he dashed untouched to the end zone behind good blocking by T..J. Clemmings and Mike Harris.

The Rams made the game interesting by scoring the next 15 unanswered points to take a 15-10 halftime lead.

The Vikings (6-2) regained the advantage in the third quarter when Bridgewater dropped back to pass on a key third down in the red zone and took off up the middle for a 6-yard touchdown run. On the next play Bridgewater raced around the right side and dove in for the all-important two-point conversion increasing the score to 18-15. Bridgewater was 13 of 21 for 144 yards and 1 interception before leaving the game in the fourth quarter.