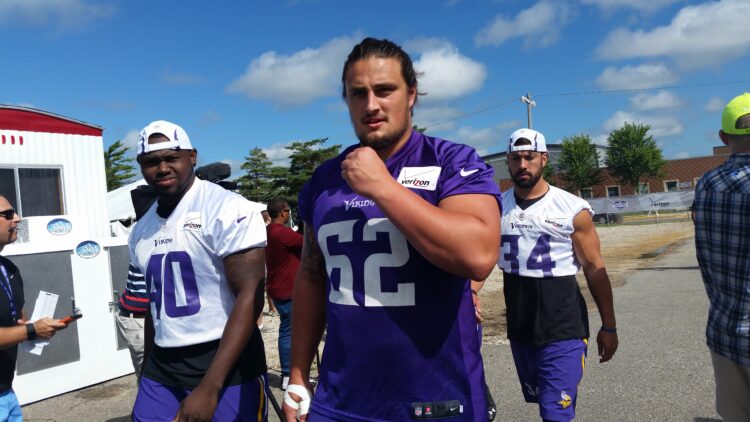 It doesn’t have to be the kind that puts his name into the Hall of Fame or anything, but the former Iowa State center puts it upon himself to lead the way for his brothers, all offensive linemen like himself.

There’s Derek, an offensive lineman for Oklahoma who is entering his redshirt senior year. There’s Matt, a four-star recruit from Sioux Falls, South Dakota and the highest-ranked player in the state—fielding offers from 18 different teams—including Florida, Florida State, Michigan State and Stanford. And there’s high school sophomore Will, who Tom says should find his time in the spotlight after he can grow out of Matt’s shadow.

Being the older brother to all of them is the kind of pressure that Farniok enjoys—he enjoys coming from a football family, even if it’s not the same kind of advantage you’d normally associate with that kind of upbringing.

“I’m the oldest, so I didn’t really get the advantage in that regard,” he clarified in our interview. “They got the advantage because they got to learn. But it’s just cool, it’s pressure but it’s good pressure because I don’t want to let my brothers down.”

Pressure is not unusual to Tom. Of course, there’s the natural pressure that comes with entering training camp with no clear hold on a roster spot, and naturally there’s the pressure that follows the journey up the depth chart at the only FBS school to provide him a scholarship.

How about designing the offense?

Well, he didn’t do quite that, but his importance to the Iowa State offense approaches that level of involvement and sophistication. ESPN was happy to profile how critical Farniok was to the function of the Cyclone offense, where drives sputtered against FCS school Northern Iowa suddenly sparked back to life against Tulsa later in the season when Tom arrived.

While the Iowa State defense was on the field last week at Tulsa, one individual on the Cyclones’ sidelines grabbed a clipboard and started drawing up adjustments.

It wasn’t quarterback Sam Richardson or any of the coaches.

But during the Cyclones’ second possession, Farniok entered the game, and Iowa State summarily put together its best offensive drive of the season.

The Cyclones capped that drive with Wimberly’s 35-yard dash — the first run of more than 10 yards by a running back this season — then Jeff Woody’s TD plunge.

After the score, Farniok took the clipboard and started drawing up how the Cyclones could score next.

“He did that through high school,” Derek Farniok said. “He probably knows what the receivers are supposed to do. Probably yells at them what to do.

“He’s always been a football-smart guy.”

“It was a little bit blown out of proportion, but I was just doing my job, not anything special,” Tom says when reminded of the story. ” It’s just you know… I’ve always been… not trying to toot my own horn or anything but I’m a fairly smart football player, so if there’s any miscommunications with the booth or what’s going on down there, I just have a good memory and I know exactly what’s going on, so I just write how it happened.”

Tom acknowledged that tweaking the offense and helping it move was a big part of what he did, but he doesn’t find it to be anything special. “It’s part of being a center. You have to be smarter.”

Farniok knows he won’t be making the roster by passing written tests, but he doesn’t think it’s any harder to showcase intelligence on the field than it is technique or strength. “Just play good. That’s all. Play good and the rest will sort itself out.”

And it’s not as if all he has going for him is understanding an offense. Though often characterized as undersized, Tom knows what the position demands and what he excels at. “I’m undersized for a guard, but I’m 6’3″ 300 pounds, that’s pretty much average for an NFL center,” he said in response to quoted scouting reports. “I’m plenty strong, I’m one of the strongest guys, especially in the rookie class, so that’s not a problem, I just have to focus on technique and playing football the proper way.”

At times it can sound simple, but there’s an uphill battle for him. It helps that he has such talented linemen to play behind, like center John Sullivan. “It’s really cool, [John Sullivan is] one of the best in the game to do it and [Joe] Berger is another one of the guys that plays center. He’s played for 11 years, so he obviously knows how to do things right, so it’s a lot of fun and it’s a huge advantage to be able to learn from guys like that.”

Farniok doesn’t just reserve his praise for Sullivan and Berger, however. His eyes lit up when asked about offensive line coach Jeff Davidson. “Him and Hank Fraley are absolutely unbelievable, him too,” said Farniok. “I mean I… am hard pressed to find two better offensive line coaches anywhere… the strides I’ve made as a player playing under them in OTAs is… unbelievable. I’m not even close to the same player. If I didn’t have someone like them, they probably would have gotten rid of me already.”

He wants to point out that it’s not so much an uphill battle as it is a process of continuous improvement, at least in his eyes.

“I wouldn’t say I was struggling, I just had a lot of work to do which is how I was when I got to Iowa State. I’m a hard worker, so I’m going to make the most of my opportunity and with guys like that, they’re going to help me maximize my potential and carry on from there.”

“I’m going to have to beat people out,” Farniok stated, “but so does everyone else. You don’t have any first-round guys that know a lot that came in as rookies, so it’s a pretty even playing field. You just gotta handle your own business, play as good as you can, and hopefully you catch their eye in the right way.”

Catching the eye of a coach like Davidson will be tough, but Farniok is happy with his choice of the Vikings. Fielding conditional offers from the Chiefs, Panthers and Steelers, Farniok jumped at the chance with Minnesota to grab an unqualified contract from a team that wanted him first, not only in the case where they didn’t grab another lineman.

And it helps that he grew up a Vikings fan.

“It’s been pretty crazy,” he reflected. “[It’s] unbelievable to grow up a couple hours from here. I got a lot of family close by and they’re all Vikings fans. You go down to Washington and they make jokes about playing for the Vikings some day. Ha ha, yea. Because, I mean realistically… that’s obviously always the goal but realistically, not many people get this opportunity, it’s pretty rare. So it’s really exciting.”

It’s a unique environment to come from, and Farniok is all too aware of the odds. “It’s different coming from South Dakota. There’s like, what, three of us in the NFL? Chad [Greenway], Riley Rieff and [Adam] Vinatieri. So, this is different because the quality of football is so much different. The caliber of player.”

He’s not too worried about the lasting impact of the legacy, even if he’s the first one to blaze a trail for his brothers.

“I’m definitely the worst offensive lineman in my family,” said Farniok. “My brother Will, he’s going to be a sophomore [in high school], he plays better technique-wise than I did going into my redshirt freshman year as a college player, so he’s going to be an outstanding football player too. He’s just falling in Matt’s shadow, one of the most gifted football players in the country. Matt’s already got his accolades, but Will’s going to get a whole lot of them here coming up soon.”

But Tom Farniok isn’t going to let the pressure of cracking the roster as an undrafted free agent, or carrying the legacy of his family, or of learning the extremely advanced center position in the NFL, get to him. After the first day of training camp, Farniok was all smiles.

“It was exciting, it was a lot of fun. First day of actually living the dream.”