Will Chad Greenway Be a Minnesota Viking in 2015? 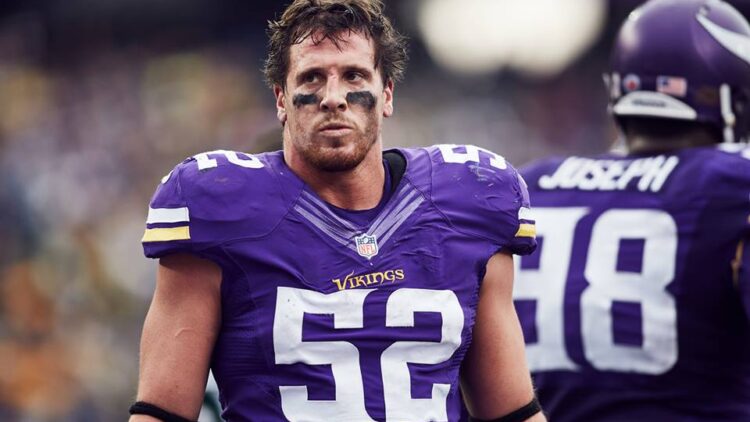 Since being drafted No. 17 in the 2006 NFL Draft, Chad Greenway has been a Minnesota Viking.

In a Nov. 2012 interview, Greenway expressed that he hoped to play the entirety of his career in purple and gold:

“I certainly want to retire a Viking […] I’d love to just play it out here and be able to have an entire tenure in Minnesota.”

Two years later, Greenway’s leadership, comradery and positive attitude in the locker room continue to be an asset to the team; his contribution on the field upheld its reputation, as well. Greenway missed four games due to injuries this season; in the 12 that he started, however, the linebacker tallied 93 tackles. According to league stats, he leads the NFL since 2007, with 984 tackles.

Greenway’s loyalty to Minnesota and athleticism have not changed; but there is no denying that other things have—namely, younger, talented players making an impact on the roster. As the Vikings packed up their gear and prepared to head into the offseason, Greenway demonstrated no sense of urgency to clear out his locker.

For No. 52, there is some uncertainty if he will return to this locker room next season.

“You don’t know,” Greenway said. “You don’t know the situation, how it’s going to happen and what’s going to happen. You’ve got to just take it one day at a time. Obviously I’ll be in here rehabbing and trying to get healthy first. So, yeah, it’s a little weird I guess. But it’s a forever-changing league and business and guys have to roll with it.”

Minnesota selected LB Anthony Barr No. 9 overall in the 2014 NFL Draft, and the rookie made an immediate impact. Barr started 12 games, and in his debut season he totaled 70 tackles and two forced fumbles. There is no doubt the 22-year-old will play a major role in the Vikings’ defense for seasons to come.

In addition to Barr proving his abilities, second- and third-year guys Gerald Hodges and Audie Cole took advantage of opportunities to step up and fight for starting positions as well.

Hodges vowed at training camp to be a bigger asset to the team, and he certainly delivered. After grabbing only five tackles over 11 games last season, Hodges wrapped up the year with 66 tackles and an interception.

Cole also impressed both the fans and coaching staff, especially in the season finale game against Chicago. The 25-year-old has held onto a roster spot, biding his time and waiting for a chance to make an impression. When Greenway missed Game 16 due to a knee injury, Cole started in his place. Four quarters and 14 tackles later, the LB had created plenty of buzz.

On a team that has seemingly shifted its focus to grooming younger players, it’s hard to predict if—and how—Greenway will fit into the roster next season. Understandably, Greenway has expressed that he wants to play somewhere that he will have a starting position. He also continues to emphasize his desire to stay in Minnesota.

“I’d like to be able to be a decade in a Vikings uniform. That’s always been a goal to finish here as a Viking.”

Head coach Mike Zimmer has not ruled out Greenway’s return as a starter.

“I love Chad; Chad’s a good guy,” Zimmer said. “You’d have to ask him, but I think even at his stage in his career he probably learned some things this year […] He’s the kind of guy that we like to have […] I would be the first one, if it wasn’t going to work out or Chad didn’t want to be here, I’d expect that him and I would have the first conversation of anyone. I have total amount of respect for him and I will treat him with the same kind of respect.”

Greeway will be 32 years old before the 2015 season kicks off. In his tenth NFL year, he would count $8.8 million against Minnesota’s salary cap; if released, he would count a much smaller number ($1.7 million) against the cap. Last season Greenway willingly took a pay cut, restructuring his contract to stay in Minny. According to the Star Tribune, the Vikings will consider two options during the offseason: restructure Greenway’s contract again or waive him.

“It’s hard to be in a situation where you’re watching,” Greenway said. “I’ve just never done that and I don’t really plan on it.”

Whatever ends up happening, fans can be assured of the veteran LB’s first choice:

“I do know there’ll be opportunities if there’s none here—but I’m a loyal guy, and I want to finish with the Vikings.”